When AVI set out to remake Mt. Union College’s dining hall last summer, it had just 12 weeks to achieve its goals.

A facilities overhaul is a major undertaking under any circumstances. One that results in a total re-concepting of the foodservice program—and is achieved in 12 weeks—is another challenge altogether. 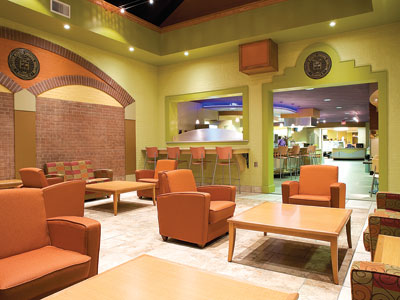 That was the situation faced last summer by AVI Fresh, the campus dining division of Warren, OH-based AVI Foodsystems, when the company was awarded the first-ever foodservice contract at Mt. Union College in nearby Alliance. According to AVI executive vice president John Coker, who developed the plan, the fast-track, gut-renovation project transformed the circa-1960s cafeteria into contemporary dining destination.

“Their new president, Dr. Richard Giese, had set out to make a major improvement in the quality of resident life,” says Coker, “affecting both the residences and dining hall. The project completely changed the nature of the foodservice operation there.”

Last updated in the late 1980s, the food platforms in the old Kresge Dining Commons were “standard cook-and-park” offerings, according to Coker: cluttered, pieced together and totally unexciting. But Giese was determined to make the 2,300-student liberal arts college more competitive in the college marketplace, and was well aware that improving foodservice would help make Mt. Union more desirable.

Now the 21,500-square-foot facility—the centerpiece of the Hoover-Price Campus Center—is a showplace, for both Mt. Union and AVI. Opened in August of 2006, the project has been a resounding success. As of January 2007, cash sales were up 25% over the prior year, and student participation in the meal plan has grown by double-digit percentages. The new facility has also allowed AVI to create a commuter meal plan (signups have been double initial projections), and to substantially increase faculty and staff use.

“In addition to creating a great dining facility for students, we wanted a place where the entire community would feel comfortable and welcome,” says Coker. The 600-seat dining room, outfitted with stylish booths and freestanding tables, is set up with decorative divider curtains—in a custom shade of deep purple for the school’s Purple Raiders football team—that can be used as a backdrop for speakers and other special events. Every Sunday, there is a full brunch open to the public. “In order to grow and develop, you have to have the support of the community,” notes Coker.

The project filled the same footprint—quite an accomplishment considering how many new food platforms and features were added. The $3-million price tag included all new flooring, lighting, seating and furniture, millwork, cooking and baking equipment, and fixtures, as well as new visual merchandising components such as signage, plasma televisions, uniforms, smallwares, and merchandising and presentation materials. Environmentally friendly building practices and locally sourced materials were used wherever possible.

The new facility was designed as an inviting, Marché-style servery with a variety of different environments, including special event space, and scratch-made restaurant-quality food. Features of the project include:

Flexibility, in fact, was a key parameter. “Every piece of equipment and every station needed to work hard,” says Ron Kooser, president and CEO of Cini-Little International, which helped design the space, working with local architects Baker, Bednar & Associates, Inc. “We had a lot of space constraints.” Being able to push back all of the cooking stations under existing HVAC equipment helped make the entire project feasible, according to Kooser.

Creating interactivity with out-front “cooking boutiques” was also extremely important. “It all speaks to our freshness mandate,” says Coker. “Customers can choose how they want their food, and watch it being made.”

More than being just an Asian destination, however, the setup is completely multipurpose. “The teppanyaki is much better than a round grill for Mongolian stirfries, because it’s so much more flexible,” explains Coker.

Indeed, the station is used for all sorts of interesting purposes, from standard burgers to Mexican specialties like quesadillas and fajitas—with all the prepped ingredients set out in the chilled display areas. “We can rotate through all types of cuisines and dayparts,” says Coker.