This month FSD hits Las Vegas, a city best known for the glitzy Strip, gambling and fine dining. But there is more to the city than what the average tourist sees. So we visited two operations to find out if risk equals reward for the locals. 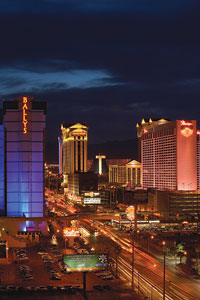 School foodservice operations across the country are feeling the pressure of rising food and fuel costs. In the nearly 303,000-student Clark County School District, the problem is being compounded by a 4.5% cut in funding for the coming school year, followed by a 14% cut for the 2009-2010 school year. Acting Director of Foodservice Charles Anderson says, “We’re all hurting.”

As the fifth-largest school district in the country—each day more than 133,000 lunches are served, along with more than 41,000 breakfasts—escalating costs are a huge concern. Despite the fact that more students are coming into the district—between 10 and 12 new schools open each year—Anderson has had to raise prices in the elementary and middle schools by nearly 10%—10 cents for breakfast and 20 cents for lunch—for the first time in eight years.

To help manage their money better, Anderson and his team of more than 2,500 employees are taking advantage of cost savings found in a new cook-chill system and a new 366,000-square foot central headquarters building—the foodservice department uses about 170,000 square feet and shares the remainder with the district’s purchasing department.

The cook-chill system is composed of five 200-gallon kettles and three blast chillers. The system has the capacity to cook 1,000 pounds of ground beef in 19 minutes. Although the primary reason the district made the switch to cook-chill was to save money, Anderson adds that it also will allow them more control over the consistency and quality of the products. Anderson estimates that producing items in bulk with the new system will save the district 50%. Currently, the system is in the recipe-testing phase, but Anderson says it should be ready for use in the fall. Some of the recipes tested so far include macaroni and cheese and a cherry dessert topping.

Because 85 of the 326 schools are in operation year round, taste tests for items produced in the cook-chill system can be performed on a small number of students before the regular school year begins. One such school where this will happen is the 900-student Hayden Elementary School. Taco meat and marinara sauce will be tested there, with students filling out paper surveys. The results will go back to the central office and changes will be made before the meal is served to all students.

The cook-chill system is not the only change the foodservice department is making to be more efficient. In 2004, the district purchased a new building about 10 miles outside downtown Las Vegas to be used as the central foodservice department location. The building, purchased for $15.7 million, houses the department’s central staff, production and warehouse. The facility became operational in August 2007. The new location is almost four times as large as the previous one. With so much additional space, a new high speed production line was installed. Food for 90 elementary schools is packaged and shipped from the central facility; the middle and high schools have their own preparation kitchens. The line can pack 7,500 trays per hour, which is more than double the number of trays that could be packed with the old line at the former building 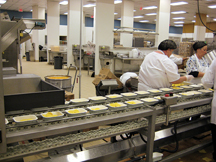 The central facility has a few additional perks for the department as well. One is more than 65,000 square feet of freezer space. Another is the bakery, which can produce up to 8,000 cinnamon rolls each day. Lastly, an assembly line can opener can open 1,800 cans per hour.

“Even with all the changes we’re making,” says Sue Hoggan, senior supervisor, “we’re still doing the same thing. We’re feeding kids.” But getting the students to participate in school meals is what Anderson considers his biggest challenge, aside from rising food prices. He adds that this is particularly challenging in secondary schools, such as the 2,400-student Legacy High School, where students often opt for nearby fast food restaurants. One reason students “eat out” is because of a menu revamp that complies with nutritional standards. Until four years ago, high schools were not a part of the National School Lunch Program and thus weren’t forced to meet strict nutritional requirements.

One way Anderson is handling this challenge is through a collaboration with celebrity chef Wolfgang Puck, who, according to Anderson, is “jazzing up our recipes for cook-chill.” Chefs from the company have been cooking some of the district’s current menu items such as minestrone soup, taco meat and chicken tacos using the cook-chill system and making alterations to make them not only taste better but also healthier. “Wolfgang is very big on fresh fruit and vegetables in schools,” Anderson says. “He is trying to get Congress to subsidize additional produce that can be sent to schools.”

Anderson’s goals for the department are to cut costs, increase revenue and streamline production. “Foodservice is a dollars and cents business,” he says. “And you have to run it like a business.”

Master Sgt. Roy Williams has a limited culinary education—a few years as a line cook in an Italian restaurant and a couple of cooking classes. Nevertheless, Williams runs a foodservice operation that can feed as many as 5,000 meals each day.

Williams is the foodservice superintendent at Nellis Air Force Base. Located just north of Las Vegas, Nellis is home to more than 12,000 men and women who live and work on the base’s more than 14,000 acres. In his 18 years working in foodservice for the Air Force—11 of those at Nellis—Master Sgt. Williams has always tried to provide dining atmospheres that are a respite from the often-chaotic life on an Air Force base.

At Nellis’ main dining hall, Crosswinds Inn, quality of life initiatives have helped him make the seating area more inviting and relaxing. Decorations showcasing the region’s landscaping have been added, along with flat screen televisions and booths. In addition, Williams is currently in the process of installing wireless Internet access and several computers in the dining hall to create an Internet café feel.

Crosswinds Inn serves between 1,100 and 1,200 meals each day during set hours for breakfast, lunch, dinner and midnight meals. The facility is on a modified 28-day cycle menu. There is a 14-day lunch menu and a 14-day dinner menu. On day 15, the lunch and dinner menus switch, making dinner on the 15th day the same as lunch on day one. The other dining halls—Mountain View Inn and Red Horse—are on the same schedule with similar à la carte menus. The only difference in t 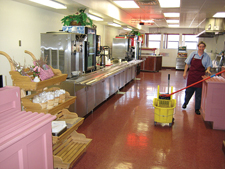 he three dining halls is that Red Horse is open only during lunch.

Due to the nature of the customers he serves—busy airmen and women who have frequent missions that take them off base—one of Williams’ facilities, Touch n’ Go, is a convenient way for patrons to grab a bite to eat in a hurry. The dining hall has two styles of service: boxed lunches that can be taken on missions and a limited serving line for hot items. The majority of the meals produced at Touch n’ Go are the boxed lunches—sometimes as many as 3,000 per day—but 800 people also purchase lunch and dinner from the limited serving line.

Because the facility is located next to the flight line, where aircraft are housed, seating is limited at Touch n’ Go, and “most people just come in and grab something because they only have 10 or 15 minutes, so they just go right back and eat as they work,” Williams says. Popular choices at this location are items that can easily be eaten by hand, such as hot chicken wings, hamburgers and chicken tenders.

Williams says his biggest challenge is competition from dining options off the base, not only from restaurants in the vicinity, but also from the options on The Strip. “I am trying to find ways to keep our airmen and women on base and from spending their money elsewhere,” he says. The facilities Williams is in charge of are only available to those enlisted men and women who are on a monthly food allotment provided by the military. Even though his prices are low—the highest-priced items cost no more than $3.50—Williams says competition from other places serving food on base, such as the civilian-operated base exchange where several quick-service restaurants are located, can draw customers away.

One way in which Williams is trying to address this is by making the atmosphere at the dining halls similar to one found on a college campus. To achieve this, Williams hopes to divide the servery into different service stations.

Staffing can be a challenge for Williams. When a recruit begins in the Air Force, a work discipline is assigned for him or her, because as Williams says, “the military gives you the opportunity for cross training so that if you leave the military, you can get a job.” For example, Williams’ first assignment was in a medical lab. After working in the lab for 11 months, he changed to foodservice. A person can cross train in another career field during his or her first enlistment. Because of this, Williams says most of the people who end up working in his kitchens have little to no culinary background.

With so many of his workers learning on the job, Williams says the cross training is extremely important. The training is done by the shift supervisor, who is responsible for ensuring each person follows the recipe card to maintian quantity, quality and consistency.

Another workforce challenge other operators don’t typically worry about is deployment. Williams says it is not uncommon for his workers to be deployed, leaving him short staffed during missions. When this happens, Williams turns to a contract with Opportunity Village, a nonprofit organization that provides vocational training for persons with mental disabilities. Opportunity Village’s 58 employees provide all sanitation work for the foodservice department, in addition to augmenting Williams’ cooking and serving staff.