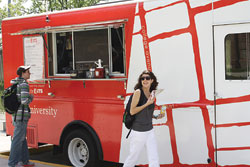 “Food trucks are one of the hottest trends in college foodservice,” says Mike Mitroi, associate director for dining and culinary support services. “It adds another dimension to campus food services by providing a much-needed option for quick meals and snacks.”

Manager Scott Smith and Executive Manager/Chef Eric Yung were the major forces behind strEATS. After the truck was designed and built by a local firm, Smith became responsible for organizing and scheduling the truck, hiring staff to run it and planning the training for the new vehicle. “Our goals are simple,” says Smith. “We would like to provide the best service, in convenient locations, to build the business. After that we have high expectations for creating new revenue streams.”

Yung created the menu, which has two basic components, a breakfast menu and a sandwich menu. The breakfast fare includes four wraps, such as Southwestern, Sausage and Feta, and Cheesy Tots and Scrambled Egg. There are also two varieties of silver dollar pancakes: chocolate chip and red velvet, and a pancake “taco” that features eggs and sausage wrapped in a pancake.

The most popular items on the sandwich menu are the Pressed Cuban and the Bahn Mi. The Cuban sandwich has shredded pork with mojo sauce, pickles, Dijon mustard and sweet potato fries on a bun. The Bahn Mi features shredded beef with Vietnamese sauce, Malaysian slaw, lettuce and tomato on a baguette.

Side items include whole fruit; regular, sweet potato and Cotija cheese fries; cheese curds; and a variety of bottled beverages. Mitroi credits Mark Andrea, manager of marketing and computer systems, with designing the red and white color scheme and graphics found on the truck.

Currently strEATS offers breakfast 7:30 a.m. to 10 a.m., lunch from 11 a.m. to 2 p.m. (weekdays only) and late-night service from 8 p.m. to 1 a.m. Wednesday through Saturday. Mitroi says that strEATS “is off to a good start,” although it is too early to present solid revenue and traffic numbers. “By using a remote, mobile campus card reader, strEATS can accept student meal plans, credit cards and cash. And with the strEATS twitter address—strEATS @MUstrEATS—we’ve made it easy for students to become followers of the truck and take advantage of special promotions,” Mitroi adds.

Once the red tape was cleared, the department decided on a concept and what type of equipment the truck would require.

“We landed on Mexican early on for several reasons,” Plascencia says. “First, the food truck was going to temporarily be taking the place of a taco stand that was closed due to construction. However, the bigger discussion was about, ‘do we want a static menu or something we can change?’ We decided to go with Mexican and see how that concept did for a while, but we wanted to make sure that if the concept got tired we had the ability to change things up without having to reinvest money in equipment. We wanted to have equipment in there that would be flexible.”

The 32-foot truck cost the department $250,000. The interior is made up of several different areas, including an eight-foot prep counter, fryers, a griddle and two service windows. A cashier rings up the order, which creates a ticket for the prep team. The staff assembles the product to order, and when the order is ready to be served a PA system is used to call out the ticket number. Plascencia says it usually takes about 30 seconds to a minute per order to complete.

“Initially we were going to put in an electric steam table, but we had some concerns about putting too much of a load on the generator, so we opted to go with the propane-heated steam table,” Plascencia says.

Plascencia says he has to keep in mind the steam table’s limited space when planning the menu because it’s only 27 inches wide.

The truck has two full-size fryers to make churros, chips and french fries. Next to the fryers is a small two-burner hot plate that the team can use if it needs to cook something that would usually be done on a stovetop.

Plascencia says a lot of the food on the truck is already cooked and heated at the commissary and then transferred hot to the truck’s food warmer.

The truck does about 100 transactions per hour during busy hours, according to Plascencia. Sales can be up to $3,000 a day, he adds, which includes breakfast, lunch and dinner.

Plascencia says the biggest challenge has been developing a process to refill the propane tank.

“The other thing we are working on is running a power connection to the truck so we don’t have to use a generator at every location. We’re still working with our electrician to get the right power outlets. That would allow us a longer run time without having to refill the propane tank as often.”

Anatomy of a Food Truck, University of California, Riverside