When the University of Wisconsin-Eau Claire opened Campus Harvest in September, the student food pantry had three dorm refrigerators full of food and seven shelves stocked with non-perishable goods. 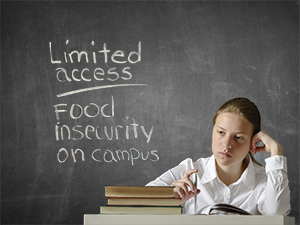 Julie Carr, administrative supervisor for Campus Harvest and executive assistant to the university’s vice chancellor of Student Affairs, says she wasn’t sure what to expect. “My biggest surprise was we had somebody waiting outside the door,” Carr says. “I didn’t think anyone would be there.”

Since then, the food pantry has seen a steady stream of 30 to 40 students each week. “We have tons of food [in the U.S.], and the idea that there are people out there that can’t afford food or are going hungry is just crazy to me,” Carr says.

Just as crazy was what Kimera Way, president of the UW-Eau Claire Foundation and executive director of University Advancement, heard a few months later. An international student showed up at the Dean of Students office nearly starving.

“She hadn’t eaten for two or three days because she didn’t have any money,” Way says. “She was really in a distressed situation, and they walked her right down to Campus Harvest and got her some food.”

Unfortunately, what is happening at UW-Eau Claire isn’t an isolated situation.

According to Feeding America, a non-profit that serves a network of 200 food banks in the U.S. that distribute food to approximately 60,000 “feeding organizations,”one in seven Americans—46.5 million people—turn to the organization for food assistance. What is more staggering is that 4.6 million—1 in 10 adults—is a student, according to the organization’s “Hunger in America 2014” report.

“This isn’t something we’ve ever tracked before,” says Ross Fraser, the director of media relations for Feeding America, which produces the report every four years. “There isn’t a lot of hard data on this issue.”

While Fraser can’t say scientifically whether there are more college students now who are hungry than there were 10 years ago, he points to the economic crash of 2008 as a catalyst for the overall need skyrocketing from 34 to 38 million Americans who are food insecure to around 48 to 50 million. “You won’t find a food bank in the country that says the need for its services has diminished,” Fraser says.

Although there is an increasing need across the U.S. to help college students who are struggling with food insecurity, Dawn Aubrey, president-elect of the National Association of College and University Food Services (NACUFS), says the problem must be addressed locally by each institution.

“NACUFS does recognize that food insecurity is a growing issue,” Aubrey says. “It’s one that is being discussed on a national level. However, the way that it is addressed is really within the community, and really at the local level for each of the respective colleges and universities.”

At the University of Illinois at Urbana-Champaign, where Aubrey is the associate director of housing for dining services, the foodservice department uses Zero Percent, a platform developed by an Illini graduate, which permits restaurants and foodservice operators to list their leftover perishable food via a website or an app that sends alerts to food pantries about what’s available.

At the end of each semester, Aubrey says, dining services also donates unused ingredients such as eggs, deli ham and shredded cheese to the Eastern Illinois Food Bank.

A student-run organization called Illini Fighting Hunger sponsors a number of campus events. As part of a campus-wide effort, more than 900 volunteers last April formed multiple assembly lines at the university’s football stadium and packaged 147,000 “dry shelf-stable” meals for the Eastern Illinois Foodbank. Aubrey says about 100 foodservice staff members participated in the event and  university dining assisted with the procurement, storage, set-up and transportation of the food items.

“The [organization] started as a result of seeing the need and wanting to address hunger in the community,” says Aubrey about the group, which was founded in 2012 and has prepared more than a half million meals since its inception. “It was a direct response from learning that donations from local companies and businesses were declining due to the downturn in the economy.”

Other colleges across the U.S. are also starting programs to help stymie food insecurity issues.

Last September, the University of North Carolina at Charlotte opened the Niner Food Pantry to help off-campus students. In October, after 53 percent of 226 students reported  they were experiencing some level of food insecurity, the University of Utah opened Feed U Pantry, an on-campus food bank for students that is a partnership between the university’s Center for Student Wellness, Campus Store and the Utah Food Bank. In November, Eastern Kentucky University opened the Colonel’s Cupboard, a service of Student Life that provides emergency food boxes—approximately nine “well-balanced meals”—to currently enrolled part-time or full-time students.

“It is reflecting our larger problems as a country,” says Nicholas Freudenberg, a professor of public health at City University of New York (CUNY) in New York City, who authored a survey published in 2011 that found 39 percent of CUNY students had experienced food insecurity in the prior 12 months and 45 percent worried about being able to afford food. “Food is available everywhere, but it’s the price. Non-healthy food is cheaper and more available than healthy food, especially when you don’t have enough money for food.” 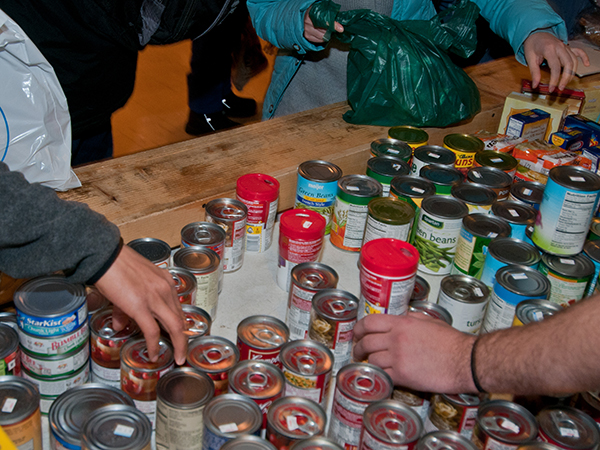 Although the issue has undoubtedly been growing, food insecurity on college campuses is nothing new.

Since 1993, Michigan State University has operated what is likely the oldest university-based food bank in the country.  Nate Smith-Tyge, director of the Michigan State Student Food Bank, says the idea grew from a group of graduate students and faculty members who were putting together Thanksgiving food baskets for fellow students, and saw a greater need.

“In the past four or five years, we have seen an increase in the number of pantries that have started up at other campuses across the country,” adds Smith-Tyge, who says that approximately 130 colleges and universities in the U.S. now have a program that provides food to students in need. “I think that there is a growing understanding of students that face job insecurity and that needs to be addressed.”

Smith-Tyge says there are a couple of reasons the need is growing. One factor is the skyrocketing cost of tuition and fees, which the College Board says increased 27 percent beyond the rate of inflation at public four-year colleges between 2008 and 2013.

As more non-traditional students seek higher education, Smith-Tyge says, they bring more “unique needs” with the pressures of balancing school, work and families. He also cites the overall state of the economy. “Wages aren’t increasing and there are all of these other draws on people’s incomes that help support a student in college,” he says.

Not asking for help

Despite the fact that food is one of our most basic needs, experts say many students who are suffering from food insecurity are reluctant to seek help from food pantries in their communities.

“Everybody was outraged,” says Daniel Lopez-Cevallos, co-author of the study and an associate director of research at Oregon State University’s Center for Latino/a Studies and Engagement. “Certainly when we find that over half of students report food insecurity, it’s worrisome.”

CUFBA says this could stem from several issues, such as students not meeting eligibility requirements to use community-based food pantries due to income levels, or a lack of transportation.

“The two most common income issues that students face is when they are still a dependent of their parents but do not receive school support from their parents, or when their student loans are counted as income,” Smith-Tyge says. “In both cases, the students have the means on paper and therefore do not qualify for community-based programs. But in reality, those resources are not there or useable [for] food or living expenses.”
That’s why Smith-Tyge says campus-based programs are important. “They are more suited to address these sorts of issues as we see them everyday and understand the issues students face,” he says. 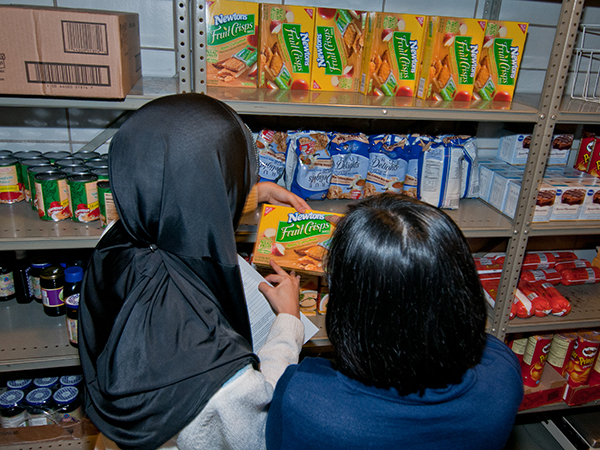 Although there’s a growing need to help college students who are food insecure, starting a campus food pantry means getting buy-in and funding from multiple on- and off-campus organizations.

Several months before opening Campus Harvest at UW-Eau Claire, Way started pulling people together who were working on research and programming in this area “to see if the foundation could provide some of the impetus and resources to help get something started.”

At the same time, Way convinced her Catholic parish, which serves the university community, to donate $3,000 to help launch the project. The money was then used to pay a student intern, who is in charge of hiring student volunteers who work in pairs during two-hour shifts three days a week. The intern also helps to promote the cause and seek donations via social media channels.

Additionally, a 15-person advisory committee—a mix of students, faculty and staff—was created to support the project. Way also worked with the university to find a recently vacated office in the basement of Schofield Hall, the main administrative building on the UW-Eau Claire campus.

Still, Ways says, “I was surprised that people really didn’t understand that there was a problem here. I think that they were not aware [of food insecurity problems] and the educational process has been important to help people understand.”

Once the infrastructure was in place, Way turned over the day-to-day management to Carr.

Since then, other groups and organizations have helped feed the success of the food pantry.

To stretch every donated dollar, food is purchased at the local food bank.

Some of the other local organizations and community members that have helped include a local appliance store that donated two used full-size refrigerators and a local farmer who frequently donates cartons of eggs.

“It’s really been the village contributing to the success,” Way says. 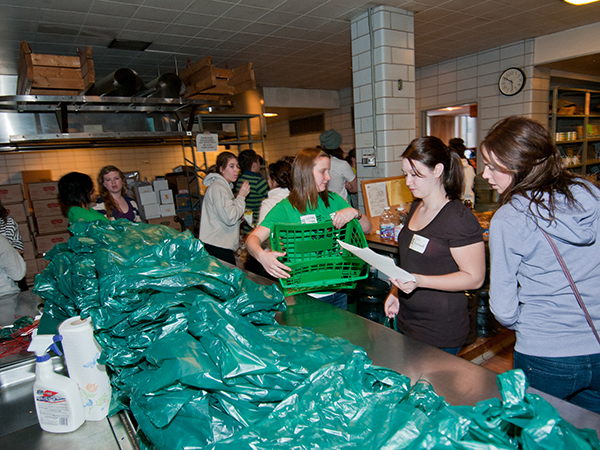