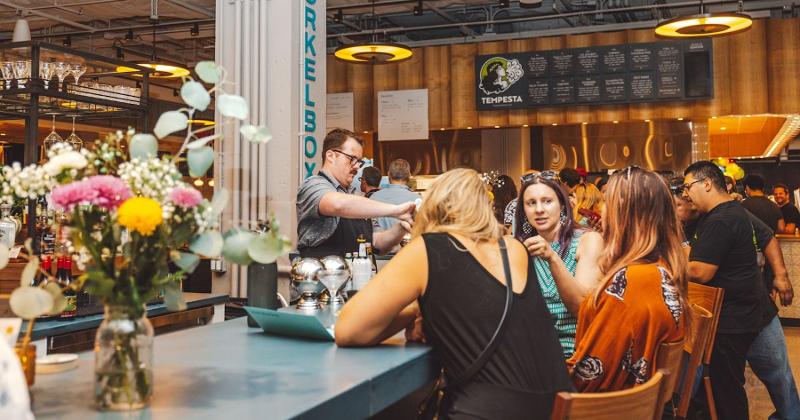 The Snorkelbox Bar is a focal point at From Here On, the new food hall inside the renovated Old Post Office in Chicago. / Photo by Nate Crawford

Pre-COVID, both operators and customers were bullish on food halls.

Filling a massive space with restaurants was a win for developers and the restaurateurs who leased kiosks at relatively low cost. And consumers enjoyed grazing from a variety of chef-inspired menus and gathering at communal tables to socialize and eat.

But the spread of a contagious virus dampened the enthusiasm.

“We were propelled by the pandemic to make a philosophy change,” said Josh Zadikoff, president of Chicago-based Cornerstone Restaurant Group. His company is currently investing in a new food hall in Williamsburg, Brooklyn, that will open later in 2022. Plus Cornerstone is now operating restaurants at Purdue University’s Atlas Family Marketplace, a campus food hall that debuted earlier this year. “We are now taking our concepts to where the people are," he said.

That’s a shift from food halls’ first incarnation when a majority were built out in urban business centers or tourist destinations. Some were too small and the wrong fit for the neighborhood. Several shuttered permanently during the pandemic while others turned into virtual or digital food halls powered by ghost kitchens. Many survived but may still not be back to pre-pandemic traffic and sales.

Zadikoff believes an unsuitable location and the wrong mix of concepts were to blame for the closures, conversions and slow restarts.

“Location is key,” he said. “Williamsburg is no longer a transient neighborhood with most of the residents going into Manhattan to work in office buildings. People are working remotely and some developers are even building offices in this area. We’re keeping an eye on where people are spending their time and bringing the food to where the people are.”

Cornerstone also operates Chef Bill Kim’s Urbanbelly restaurants in Chicago, which was one of the original concepts in Time Out Chicago, the giant food hall that opened in 2019 and has since reopened in the city’s vibrant Fulton Market Neighborhood.

“We’ve tweaked and evolved Urbanbelly and feel the brand has legs,” Zadikoff said. “We’ve always been New York-curious and feel now is a good opportunity to test the market. New York is underserved in some ways, especially with food halls.” 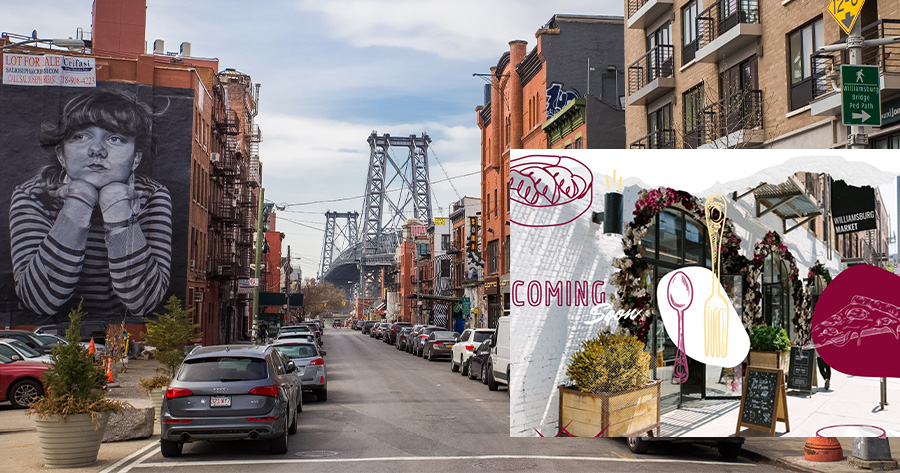 The Williamsburg Market, located in Brooklyn, N.Y., has a broad customer base of residents, nearby office workers and visitors. | Shutterstock

The Brooklyn food hall, called Williamsburg Market, will offer a compilation of brands that will attract patrons more than once a week, he believes. Some are Brooklyn culinary destinations, including Di Fara pizza, plant-forward BKLN Wild and Mexican spot Mexology, from local favorite Ivy Stark. Those concepts should attract people from other boroughs to the venue, which benefits from being in a hip neighborhood that New Yorkers can visit by subway or ferry.

Cornerstone is aiming for an all-day cafe vibe—a meeting place where people can hang out and work, socialize, eat and drink—even between meals. The coffee concepts will be larger. A 360-degree bar provides plenty of additional seating. Customers can order food from the 18 kiosks while sitting at the bar and enjoying drinks. There are also more private seating pockets where people can have small business meetings.

“We’re going in with open eyes and learnings from our experience at Time Out Chicago as to what works and what doesn’t,” he said.

Time Out Chicago was more about fine dining, he said, but Willamsburg Market will have lower price points and a different menu mix. The Urbanbelly menu, for example, will include more shareables to boost check averages. And takeout and delivery will be readily available.

The ability to have food to go is key, Zadikoff believes, but some food halls found it difficult to transition during the pandemic and had to come up with solutions on the fly. “Carryout and delivery is necessary to survive and thrive,” he said.

The lure of the building

Williamsburg Market is designed to merge the industrial nature of Brooklyn with French country farmhouse style, according to its promotional materials. The ethos of the building contributes to its vibe— also an essential element in From Here On, Chicago’s newest food hall. 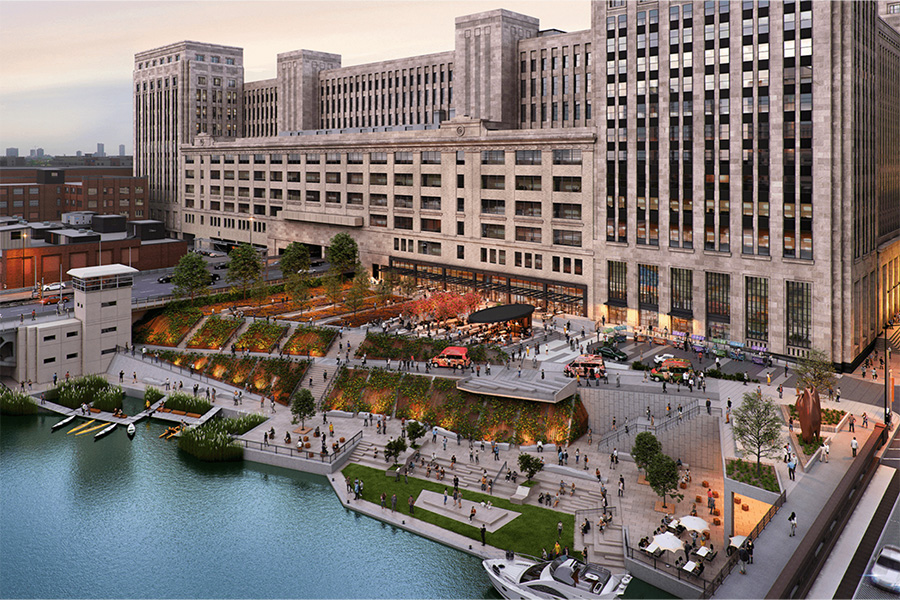 The historic and newly renovated Old Post Office on the Chicago River is home to From Here On. | Photograph courtesy of post433

16” on Center, an operator of pioneering Revival Food Hall and several Chicago restaurants, built From Here On in The Old Post Office, a historic 1921 Art Deco building on the Chicago River that had been vacant for more than 20 years. The building has been remodeled into offices, with Uber, Walgreen’s and other corporations now headquartered there on upper floors.

It’s also located near Chicago’s busy Union Station and the food hall was so named to give commuters and office workers a chance to unwind before heading home and “have a great night ‘from here on,’” said Tim Wickes, director of operations for 16” on Center.

Aside from a unique design, From Here On also incorporates two other elements that both Zadikoff and Wickes believe are vital to the future success of food halls: large spaces devoted to the bar and outdoor seating.

The oversized Snorkelbox Bar is the focal point of From Here On. In step with the post office theme, the bar is modeled after the iconic blue mailboxes that collect mail; it's designed to catch the attention of both commuters heading to the station and office workers coming and going upstairs. (The offices have a panoramic view of the first-floor food hall.) The bar serves serious cocktails and hosts happy hours.

Both the bar and restaurant concepts have access to a sprawling 26,000-square-foot patio overlooking the Chicago River. Live events can be held both inside and on the patio.

Revival Food Hall, opened in 2016, is missing that outdoor space. Plus the kitchen for that early 16” on Center food hall is on the 20th floor.

“At From Here On, we wanted customers to see the action and all the hard work that goes into running a restaurant, so the kitchen is right in view at From Here On,” said Wickes. For the food concepts, he invited entrepreneurs and small operators that got their start in neighborhoods away from Chicago’s central Loop, including the South Side and Avondale. Flo’s Kitchen, serving up Durango-style Mexican food, formerly operated as a food truck.

The other food kiosks include Tempesta Market with a menu of charcuterie and Italian sandwiches; Hot Chi Chicken, a Nashville Hot Chicken concept; Phobox, the next iteration of Phodega, an Asian-American noodle shop; Millie’s, a 60-year old all-day diner; and Familiar Bakery, a showcase for pastry chef Ashley Robinson’s pastries, house-made bagels, breakfast sandwiches and pies. 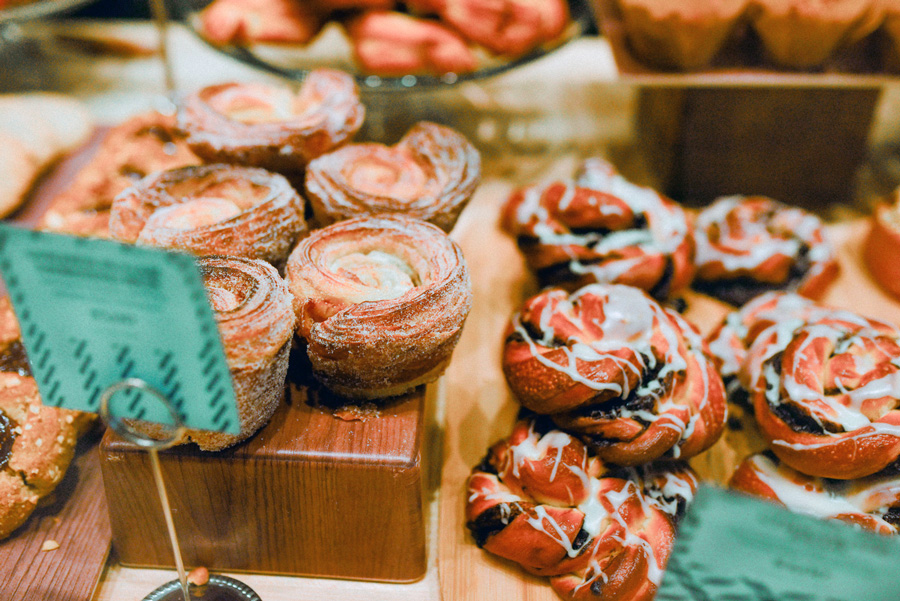 Morning buns at Familiar Bakery in From Here On. | Photograph by Samantha Parquette

“We tried to provide an outlet for someone just getting on their feet or with one or two brick-and-mortar locations,” said Wickes. “In several cases, the pandemic spurred them to try something new or start over.”

From Here On installed a spacious catering kitchen on an upstairs floor to fulfill large lunch and party orders for office tenants—another advancement that will boost business for the operators downstairs.

Assembly Food Hall is located in Rosslyn City Center in Arlington, Va., a former mall that was converted to a mixed-use building housing office, retail outlets and wellness amenities. The food hall concepts were curated by DMK Restaurants, owned by David Morton of the Morton restaurant family.

Like Williamsburg Market and From Here On, it brings the food to where the people are—office building employees, shoppers, local residents and remote workers. And it features what the newer food halls consider must-haves: Four bars, six dining concepts, work spaces and a large outdoor terrace. 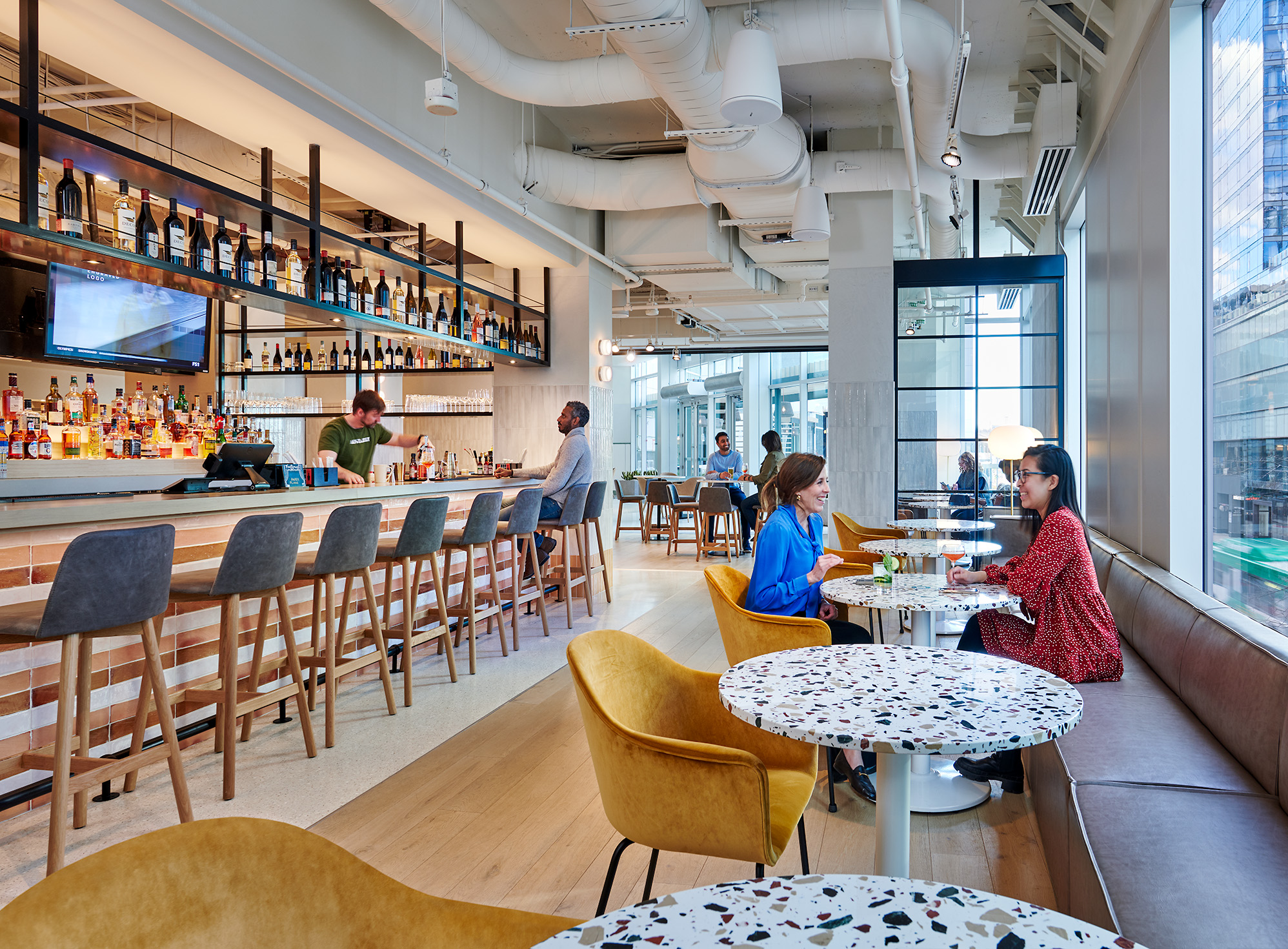 The bar and seating area at Assembly Food Hall. | Photograph courtesy of Assembly

“We developed every concept solely for the benefit of our guests as a ‘one off’—meaning they are unique to Assembly,” said Morton. “While most food halls offer ‘lite’ versions of existing brands—which we believe can be dilutive for both the outlet and the brand—each concept was specifically created with our guests' wants and needs in mind … and we have the ability to continually modify menus based on guest preference without constraints.”

A corporate catering operation is also in the works. 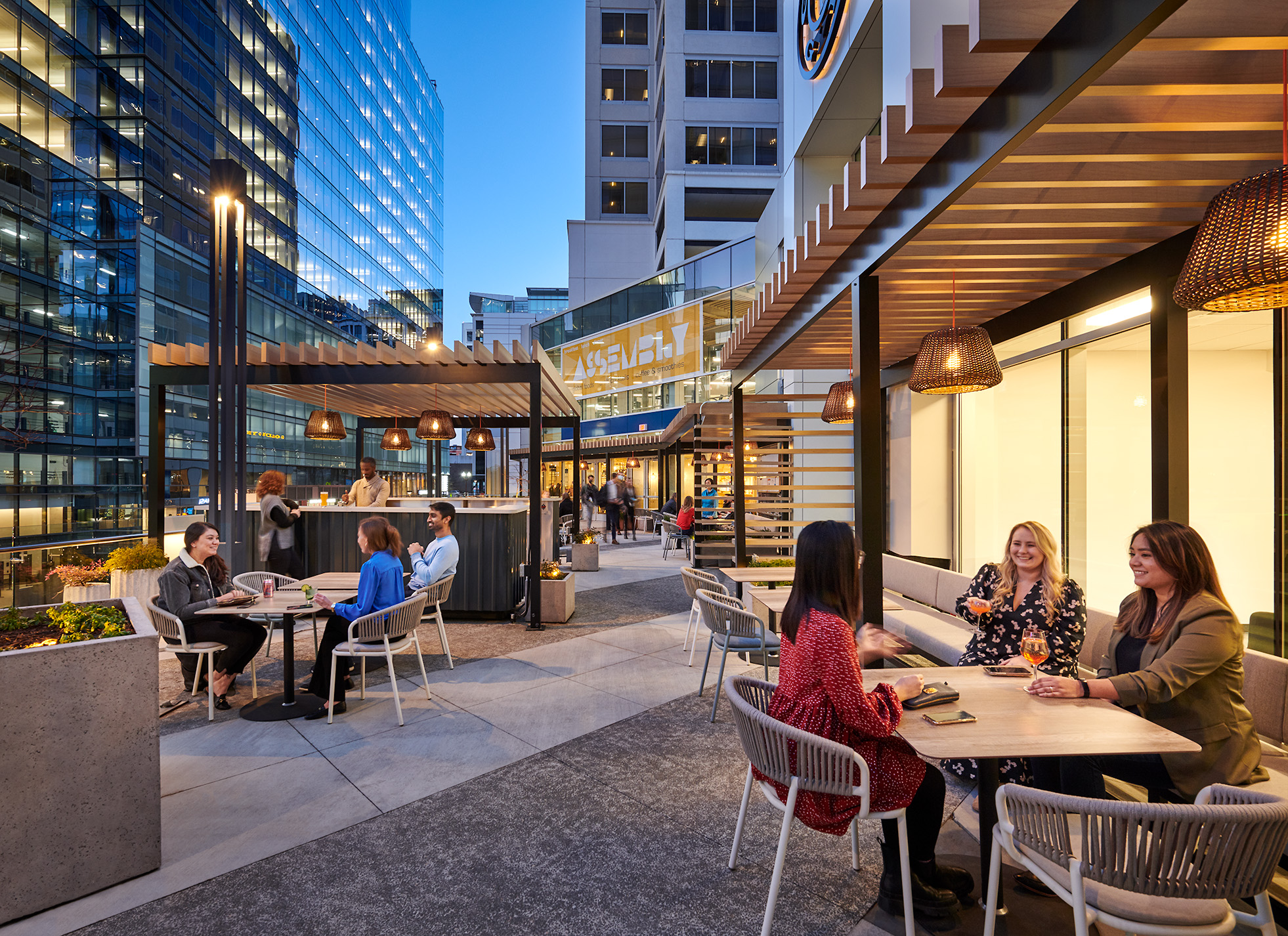 Outdoor seating is a “must-have” for new food halls, like this sprawling patio at Assembly Food Hall. | Photograph courtesy of Assembly

Similar to From Here On, Assembly is located near a busy commuter station; in this case, above the Washington D.C. Metro. As workers trickle back to offices, Assembly hopes to capture them in the morning and evening on their way to and from work.

“We’re on top of the region’s 11th busiest Metro station, so from the very beginning, location and customer base informed both AREP’s [American Real Estate Partners] redevelopment strategy for Rosslyn City Center and the creation of Assembly. We wanted to provide a unique food and hospitality experience that reflected and served our vibrant customer base who live, work and play in Rosslyn,” said John Chesley, managing partner AREP. 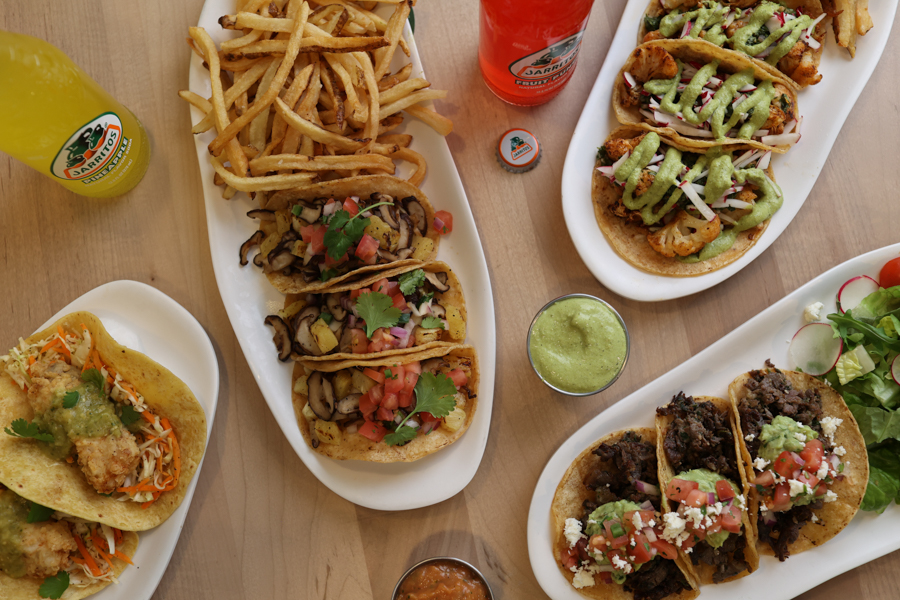 All three of these next-gen food halls are positioned to both promote community and be reflective of the community they serve.

“Food and beverage can be such a cool component of any number of spaces—apartment buildings, office buildings, shopping malls and more,” said Zadikoff. ”We don’t know the perfect formula, but we’re setting ourselves up to adapt and change.”