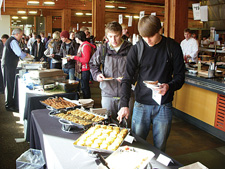 “Each semester we go to a different university and invite chefs from all over the country to come in and prepare more than 70 recipes for students to try,” Seng said. “It’s a great way for the students to let us know what they like best. Then we feature those menu items the following semester on our campus dining menus across the country. So it’s a great way for us to be on trend, and the students have a great day tasting everything.”

The expo was set up like a grocery store tasting, only on a gargantuan scale, according to Seng.

“We had about 22 different stations set up with a different group of chefs working each one,” Seng said. “Each station had at least two and sometimes up to five or six different items. The students just went around at their leisure and tried whatever they wanted and then they marked off what they thought of that particular menu item on a ballot, which we then tabulated by the end of the day. The recipes came from Sodexo chefs and then we worked with our vendor partners on the different products that would go into the recipes. There were more than 30 chefs present at the expo.” 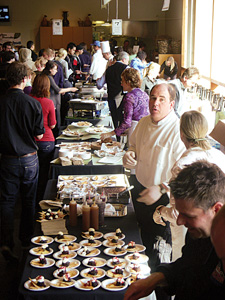 In conjunction with the expo, Sodexo released a menu for 2009 that compared current food trends to those from 20 years ago. Some of the trends from 1989 included fruit and cottage cheese plates, chicken nuggets, turkey tetrazzini and chicken chop suey. Compare those to current trends of locally grown fruits and veggies, crispy garlic-ginger chicken wings, mac and five cheeses and Vietnamese pho and it’s easy to see the appeal of the Food Trends Expo. The top foods tasted at SPU’s expo included roasted Asian chicken salad on flatbread, sautéed swiss chard with balsamic flatbread pizza, chicken and cheese flautas and funnel cake fries. The menu items will be integrated into campus menus starting next fall with an icon denoting them as items that were voted on by students.

“It’s a really great way to show our commitment to customer insight—because how much more direct can you get?” said Monica Zimmer, director of public relations for Sodexo. “It’s not just research from somewhere. We prepared it for them, they tasted it and they told us what they liked. It’s really fun, but it’s really a commitment to customer satisfaction.”

To drive student participation, Seng said she worked with students to do some marketing on Facebook. She also created posters and table tents so they could get as many students as possible at the expo.

“A normal Friday at lunch was about 900, and we had 1,500 students come in during the three-hour period,” Seng said. “We really dramatically increased participation. I even heard students talking about getting out of class so they could come to the tasting.”