At A Glance: Memorial Hospital North in Colorado Springs, Colo.

•Staff: 30 employees, about 20 with restaurant experience

In April, after 18 months of construction, Memorial Hospital North, a branch of the Memorial Health System in Colorado Springs, CO, opened. One of the highlights of the 98-bed facility is the Sodexho-operated Garden Terrace Café-Bistro, where the quality, presentation, service and abundance of menu choices make the café more akin to a hotel dining operation than a hospital. Cornell Colbert, general manager and director of nutrition services, emphasizes that the facility is a café, not a cafeteria. 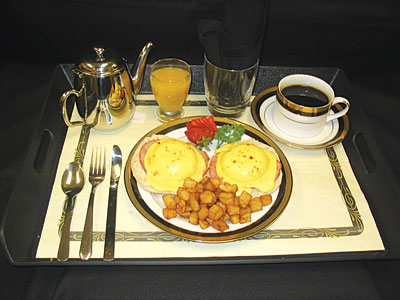 “We don’t consider ourselves a cafeteria because that has a certain connotation,” he asserts. “The quality of the food and excellence of the service bring us out of the cafeteria era and into the café-bistro era in foodservice.”

Entering the café, visitors come upon “The Northern Star Bistro and Coffee Shop” which offers eponymously branded organic coffees and lunch items like quiches and panini. Adjacent is a wood-stone pizza oven and a “grab ’n go” deli section with a daily selection of sandwiches and salads. An exhibition kitchen spans the length of the café.

“All of the cooking is done right in front of the customers as they wait for their orders,” Cobert says. “We don’t make big batches and just scoop the portions out.”

A “Wellness & You” salad bar emphasizes fresh ingredients—nothing is frozen or canned. Beyond the salad bar, the “Innovation Station” features panini presses and sauté stations.

Colbert, whose background is in restaurants and catering, made it a point to hire a restaurant-trained staff. Executive chef Chester Wright, recruited from The Mirage in Las Vegas, was a key acquisition.

Wright had no experience in the non-commercial sector, and his first few weeks at Memorial Hospital Central—where he developed recipes and trained staff members as Memorial North was being built—were eye-opening.

“That gave me an idea of what I was up against,” he laughs. “It was regular hospital food at Central. For Sodexho, this [upscale concept] was a whole new ballgame.”

Wright began by reworking Sodexho’s recipes with an emphasis on enhanced presentation. Wright’s Vegas background taught him the importance of “putting the final touch on the plate.”

“When our customers are served a plate, and especially when patients lift a lid, we want them to say wow. So instead of just putting a piece of cheesecake on a plate, we paint it with different sauces and garnish it with a sprig of fresh mint and some whipped cream,” Wright explains. “We serve our flat-iron steak with truffled mashed potatoes that are piped on, not just scooped out.”

Another Memorial North touch: tomatoes in salads are blanched and then peeled. “It’s the small things that make a big difference on the plate,” says Wright.

Wright believes that his biggest challenge is training his staff of 30 to take these extra steps.

“When you hire people who used to work in a hospital, they’re used to a certain presentation. They don’t understand how important it is to take the extra time to do final touch-ups,” he explains. “We have to train everyone for at least two to three weeks to make sure they get the presentation concept.” 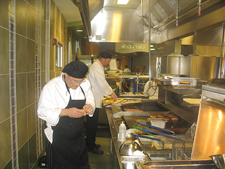 Wright also had to teach hospital-trained staff members a new set of culinary techniques. He laments “soggy, discolored hospital vegetables,” and has his staff prepare them by “cooking the vegetables in hot water for a short time, shocking them in a bowl of cold water, then finishing them up in a saucepan with a little broth… just like in culinary school.”

The hospital’s signature dishes include shrimp scampi with vegetables and angel-hair pasta, and steak and lobster for maternity patients.

“Although the quality is a lot higher, prices aren’t much different from those of standard hospital fare,” says Colbert proudly. At lunch, an Angus burger is $2.89 and a Monte Christo sandwich is $4.09. Food cost is approximately 28%.

Although the café has been open for less than a month, Colbert says that he is already halfway to making budget for the year. “We’re already seeing people from the community, not here for a procedure or anything, stopping in because they think this is a great place to eat,” he boasts.

The café serves about 400 people every day, while the room service program—or “tray service”, as it is officially called, reaches just under 100 people.

“The program is run very much like hotel room service,” says Colbert. Beside every bed is a three-page menu that stays in the room.

“There are two places where folks feel like they lose control,” notes Colbert. “One is the airplane, and the other is the hospital. I want to make sure that when patients come here, they feel like they are given as much freedom and respect as possible in their meal choices.”

Service is available from 7 a.m. to  7 p.m., and patients may pre-order all of their meals or order for immediate service. All meals are delivered within 30 minutes of ordering.

“We spent a lot of time programming ‘Health Touch,’ our room service computer system,” Colbert says. “It has all of the menu items within it and holds them within diet-specific programs. If we have a patient that has a health restriction, ‘Health Touch’ will remove certain choices from the menu. That gives the operator a chance to educate the patient and say, ‘Might I suggest something else...’”

Presentation is a priority in this program too. Fine china and flatware have replaced plastic plates and utensils, a stylish touch that Colbert says is also cost-efficient and green. Even the serving style is “five-star,” says Wright.

“The server puts the meal on the table for the patient and lays the napkin out,” he describes. “It’s quality tableside service. When we serve soup, the server pours the soup into the bowl at the table as they do in fine restaurants.”

“Patients appreciate that when they come here they aren’t going to get green Jell-o or warmed over lima beans,” Colbert says. “When they make the choice of what facility they are going to, this issue [of comfort] comes into play.

When a facility is so geared towards excellence that it even flows into the dining establishment… it’s a major plus for that institution.”