Since Penny Fowler’s foodservice program is federally funded, price must be the No. 1 consideration for the Gainesville City School District director of school nutrition when selecting a supplier. But, the Florida operator says, it’s not the sole deciding factor. 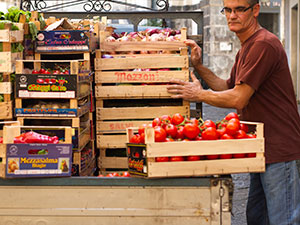 Fowler wants to see suppliers perform their due diligence when trying to partner with her school program, and notes that a good supplier will catch small details such as varying site deliveries based on school hours. “We have seven schools and eight kitchens that they have to deliver to on time,” she says. “At some sites, a food truck cannot deliver at a certain time because the school is in early release.”

Nothing happens in the foodservice industry until food and supplies are delivered. Picking a supplier who can meet an operation’s needs at a reasonable cost is challenging, so having a set system of selection and standards can be crucial.

Learn as much as you can from suppliers by touring their facilities and meeting employees.

“Get to know their people,” says Mike Dunn, director of product quality assurance for Sodexo in Gaithersburg, Md. “There are some really awesome entrepreneurs out there who are working on the safety of products.”

Dunn, whose team is in charge of monitoring Sodexo’s suppliers for food safety compliance, also advises meeting a supplier’s technical experts, who provide tracking information, which offers clues about a company’s quality standards.

Inquire with other foodservice operators about their opinion and experiences, says Fowler. “In the past I have reached to other directors and asked them about the number of years their district has done business with the vendor, the vendor’s ability to service their district and availability of product.”

Another way to get more information is to pull a business credit report, says Jim Pazzanese, vice president of supply management for Sodexo. Along with his corporate purchasing team, he is in charge of this rigorous review process, clearing suppliers so that its foodservice director clients don’t have to. Pazzanese also advises asking plenty of questions, including the company’s future plans.

“In the past 10 years, I wish I could have gotten an honest answer from a supplier as to, ‘Are you planning on any acquisitions or divestitures?’” he says. “Massive amounts of consolidation hurts our ability to compete on product when there are fewer suppliers.”

Dunn advises looking at the food safety and food management standards a supplier has decided to follow, while Fowler seeks suppliers who can submit the nutritional data required by the USDA for school meals.

“Those submissions are a big deal for us,” she says. “What we want from [suppliers] is loyalty, integrity and due diligence.”

Capitalize on customization with bowl meals

Coronavirus is forcing the supply chain to change course