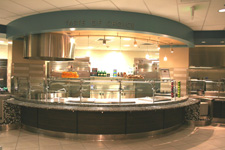 The new servery features a scattered layout with different serving stations; the old servery had one single serving line. The new stations include a Mongolian grill, deli, pizza, salad bar, stir-fry and an international station that caters to the area's large Hispanic population.

According to Marvin Pierce, director of foodservices for the hospital, sales have increased during the first week the new café has been open. "Our vision with the new cafeteria was to have a state-of-the-art facility that could handle our increase in participation," Pierce says. That increase in participation has come, in part, from additional hospital employees. Since the cafeteria was built more than 30 years ago, the hospital's staff has increased by more than 2,000 to reach 5,280 staff members. Pierce says everything in the café is new and that this is the first major renovation the servery has received. 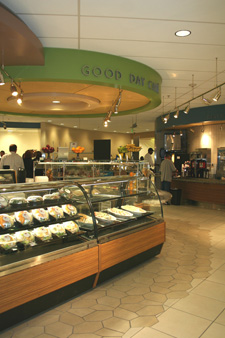 The renovation project expanded the kitchen and servery by nearly 24,000-square feet. In addition to the renovated café, seats were also added to the dining room, which is scheduled to open next month.

The project was done in phases; the servery was the second phase. The first phase was renovating the patient foodservice area. The department serves patients with a traditional tray line, which was upgraded with all new equipment during the renovation. In addition, the tray line was developed so that the department can make the switch to room service for patients, which Pierce hopes to start in early 2010.

During the renovations, food was prepared and served in temporary units, which were set up in the servery in areas where construction was not taking place.

A senior-living chef takes it outside