Attracting fickle customers to campus c-stores can be tricky when these stores offer only standards: candy, soda and limited home/health items. That’s why many operators are creating c-stores with a greater focus on food, be that groceries, cold grab-and-go items or fully prepared meals.

At 28,400-student Texas Tech University in Lubbock, Samuel Bennett, director of Hospitality Affairs, has developed a different hybrid of dining hall and c-store with his Sam’s Place mini-markets. These markets are much more food-focused than a traditional c-store, Bennett says.

“There were several goals in mind as we progressed into this style of service,” Bennett says. “We wanted less square footage than a traditional dining hall, but we still wanted to offer a large variety of food options. We wanted to be able to address the customers’ desires and what we were detecting in the marketplace. I had the distinct notion that a pure c-store would not work on this campus because I didn’t think we had the traffic for it. It turns out I was right because without the food component these mini-markets wouldn’t be what they are today. These locations offer a whole variety of foods, just like a retail operation would have. But there are also c-store items like candy bars and potato chips, as well as personal items.”

Although Bennett doesn’t use the word c-store with these units, the convenience factor can’t be denied.

“As the mini-markets grew and the volume in business grew, we were able to close down several of our traditional halls,” Bennett says. “Also, we took one traditional hall and converted it to a larger mini-market. So this model hasn’t completely taken over our traditional, all-you-can-eat halls, but they’ve taken a good majority of the business.”
There are currently five Sam’s Place stores on campus, with plans to move one of the locations to a newly renovated space that will feature the mini-markets’ first national brands, Chick fil-A and Quiznos. There are also plans to open a poolside store at a new campus leisure pool this summer. 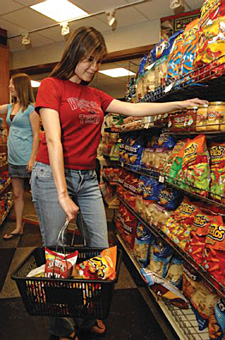 “The overall concept has been very successful and has a high customer satisfaction level,” Bennett says. “During the last eight years, these concepts have proved (by the residents voting with their feet) that traditional dining services was not widely accepted and was on the decline. I recommend conducting focus groups and surveys first before deciding what kind of c-store model will work best. But in our experience, there has to be a high food component with excellent grab-and-go choices and healthy choice options included.”

Lewis says his c-stores don’t carry a large variety of non-food items because they’ve found grocery and grab-and-go items to be more in demand.

“We don’t have many personal items. We have primarily food,” Lewis says. “We offer grab-and-go salads and sandwiches under our own Fresh Express label. We don’t really do hot entrées in the stores because they are located with the food courts. By having c-stores in the food courts, it allows us to hold down labor by using the same cashiers.”

Ball State has had c-stores on campus for 10 years, and Lewis says keeping the product mix fresh is a priority.

“The department holds a monthly c-store grocery meeting to select new products and make decisions on cutting slow selling or tired products,” Lewis says. “That meeting works to keep us up-to-date with trendy products. Students are more concerned with asking for longer hours of operation. Students are always going to want food on the run.”

Not just students: Senior living is another area where c-stores are making headway. At 425-resident Homestead Village in Lancaster, Pa., a new Quik Market c-store is offering grocery items as well as grab-and-go options that residents can purchase to eat later in their homes.

“The Quik Market opened in early March,” says Keith Wilson, general manager for Cura Hospitality at the community. “Basically what happened was we had this area with a sink that had kind of become a junk collection area. I decided that we could better utilize that space by giving residents a place where they could come and get things like hot soup, milk, juice, eggs, produce and bakery items.”

The store is less concerned with dry goods since the campus already had an auxiliary c-store. So Wilson stayed away from things the other store sold with the exception of perishables.

“It was hard for [the auxiliary c-store] to offer things like a quart of milk or eggs because they wouldn’t sell it fast enough,” Wilson says. “The good thing about the Quik Market is because it’s perishable stuff we can rotate it in and out. If it doesn’t get used, we use it in the dining room.”

“The entrées are the same from the dining hall,” Wilson says. “The idea behind that was these people start getting busy and if they want to have the meal of the day, they can come and get it, put it in a to-go container, go about their business and then go home and eat. This way we are quick chilling and getting it ready to go so they don’t have to worry about any foodborne illnesses or anything like that.”

Wilson says he sees c-stores as the next step in the community’s growth. In the next five years, Wilson expects the number of independent living residents to grow from 325 to 600.

“My intent was not to go and make a lot of money,” Wilson says. “It was really just to use that space and give residents something they could use.” 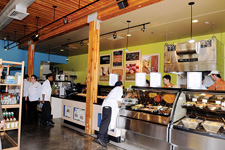 At 2,000-student Colorado College in Colorado Springs, a new sustainability-focused c-store offers made-from-scratch healthy foods and local products. Beth Gentry, general manager for Bon Appétit at the college, says The Preserve was created to focus on the college’s mission toward sustainable food.

“The goal was to have a c-store that really highlighted unique local products and homemade foods,” Gentry says. “Customers can choose to dine in or take entrée portions back to their rooms or outside with a gorgeous view of Pikes Peak. The Preserve is special because we strive to source Colorado items such as local honey, local cheeses, local bakery items, etc. It offers students a specialty food venue while also offering several entrée choices that they can mix and match to make a personalized meal.”

The c-store is set up with a hot food display case that offers vegan, vegetarian and meat entrées as well as hot sides. There is also a cold entrée section where students can buy items by weight such as chicken salads and Greek salads to take back to their rooms. Gentry says it was important to the department that the set-up of the c-store be part of educating students on local food sources and products.

“This store allows them to better understand the bounty of Colorado,” Gentry says. “We also wanted to offer them options of putting together a meal or a snack and giving them the ability to have a store on campus where they could buy a gallon of organic milk or certified-humane cage-free eggs.”

The Preserve joins the college’s other c-store, Local Goods, which offers all the typical convenience items from sodas to toothpaste.

“At The Preserve, we try and focus on food. However, Local Goods offers health/home items. Both locations are very successful,” Gentry says. “Local Goods has a great location in the primarily freshman residence hall and appropriate hours for the college student’s needs. The Preserve, during the course of the last few months, has adapted to the needs of the students and has become a great late-night hangout—it’s open until midnight—that offers food that fits the growing sustainability focus of students. So many students are focusing on what their campus and they themselves can do to be part of a healthy earth. There will always be a need for some of the usual suspects in c-stores, (sodas and snacks) but there is also a demand for convenient items that are not fully processed and that have a defined value toward sustainability.”