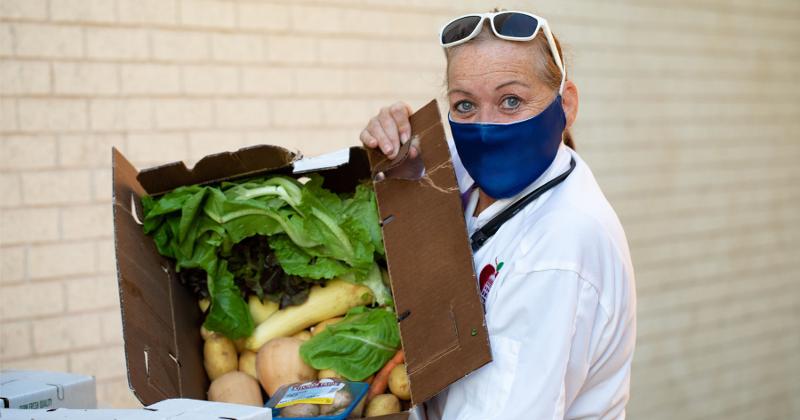 As school districts throughout the country switched to curbside meals when the pandemic hit last spring, The Common Market was looking for ways to help increase families’ fresh food access.

“We realized that we also needed to shift and adapt within the constraints of COVID and the challenges that imposed on many food distribution efforts,” says Rachel Terry, national partnerships director for The Common Market, a regional nonprofit food distributor working to connect local farmers to schools.

The team came up with the Farm-Fresh Box Program, which puts boxes filled with fresh, local produce in the hands of school districts for distribution in their communities.

Since its launch last spring, the Farm-Fresh Box Program has helped school districts increase their meal participation while also providing families with boxes of fresh produce in addition to regular school meals.

A plethora of produce

Funding for the boxes is provided by other nonprofits or by the districts themselves. The New Jersey districts, for example, used untapped funding that normally went toward the Fresh Fruit and Vegetable Program.

Each box is filled with a variety of local produce depending on what’s in season. Past boxes have including carrots, broccoli, potatoes, lettuce, apples, cucumbers, tomatoes, radishes, butternut squash and more.

Boxes are typically distributed weekly or bi-weekly. West New York School District in West New York, N.J., was also able to set up distribution through its town, allowing the boxes to be delivered to local senior sites, housing sites and more.

“It was a really good setup because we're able to take those boxes and hit a different demographic than what I was hitting with the meals that we were serving from school,” says the district’s food service director, Sal Valenza.

The farm fresh boxes have been popular since the program was launched, Valenza says.

“Any time we have a box, our participation goes up,” he says. “We have never had a leftover produce box.”

Bridgeton Public Schools in Bridgeton, N.J., distributes its boxes on Thursdays and sees around a 30% higher participation rate on those days compared to Mondays, when it does its regular curbside meal service.

“We call those boxes hot commodities,” says Bridgeton Director of Food Services Warren DeShields. “You'll see cars drive by the site, and they'll slow down. If they don't see the boxes, then they keep on going. If they see the box, they'll pull in and make sure that they get them.”

DeShields has been so pleased with The Common Market that he became a board member at the nonprofit and believes that the boxes have been a big help to families during the pandemic. “It's just been a wonderful resource for fruits and vegetables for our families,” he says.

How to harvest bountiful relationships with farmers

How frozen soup can make menu planning a breeze