If indeed the adage "all good things come to those who wait" is true, then the Dining Services staff at the University of Maryland-College Park must be ecstatic with the renovation of the Adele Stamp Student Union. The remake of the foodservice space in the 50-year-old campus center was completed last November, closing the book on a process that began, amazingly, in 1989. 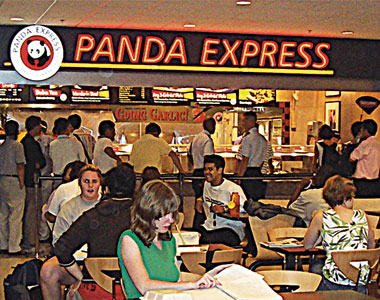 There is little doubt students are taken with the results of 16 years' work. Revenues are triple what they were with the former foodservice concepts, according to Wendy Fuoss, assistant director for Dining Services at the Stamp Union. The revenue growth is due primarily to the fact that Maryland decided to rely almost exclusively on national brands in crafting the space.

Brand stand: "We chose this route because brands receive a greater acceptance on campus, compared with our own concepts," explains Pat Higgins, director of dining services at the 35,000-student university. "Students know the quality, and they perceive it to be better quality."

The renovation transformed the foodservice offerings at the student center from a hodge-podge of Dining Services, created food units, scattered throughout the union, to a collection of national brands gathered in a three-level atrium-style foodcourt. The units are a mix of company-operated stores, restaurants Dining Services operates as a franchisee and units it manages under licensing agreements.

The company-operated eateries are Steak Escape, Panda Express and McDonald's. Dining Services is a franchisee of Subway, Taco Bell and Sbarro, and it holds a licensing agreement with Chick-fil-A and Freshens. In addition, the university has agreements with Starbucks and Boar's Head to serve their products on campus. Starbucks can be found in two coffee bars, one in the union and the other in the university library, while Boar's Head meats are sold, in sandwiches and by the pound, in the union's Marketplace Deli. The coffee bars and Marketplace are university concepts.

Only one storefront remains from the "old" union: Adele's Restaurant, a wait-service establishment that offers what Dining Services calls "a twist on classic Maryland dining."

Long time coming: A student committee selected the brands, as part of the process that began in the late 1980's at about the same time the Berlin Wall was coming down.

"We did a series of studies and surveys, with the help of Birchfield Food Systems, to divine the types of service and menu offerings the students would want," recalls Joe Mullineaux, associate director for Dining Services. "Then we put out an RFP based on that."

The design process began in 1992, when foodservice consultant Cini-Little International was brought in to conceive the foodcourt itself. Construction finally began in 1998 and took seven years, mainly because Dining Services and the university didn't want to shut down the union for any length of time.

"We kept business going throughout," Mullineaux says. "The c-store we operate there moved four times during the renovation, but we never closed it."

What Cini-Little designed is an atrium visible from and accessible by entrances on three separate levels. (Because of the layout of the Stamp Union, visitors can enter from the basement, ground floor and first floor.) Although the university handled the overall renovation, the build-outs of the individual concepts were either done by the companies themselves or by Dining Services with the cooperation of the franchisors.

"The whole space is very open, with that natural light piece," says Higgins. "It's just like a foodcourt in a mall, and it mirrors the types of places students go to when they are not on a college campus."

Good partners: Aesthetics aside, the foodcourt works because the brands are popular and the partnership between Dining Services and the brands is strong.

"It was a pleasant surprise to see how willing the corporations were to work with us," says Fuoss. "Whenever we opened a new facility, they were right there to help with training, with the opening and with any follow-up we needed."

As popular as the food brands have been, nothing seems to match students' demand for coffee, Dining Services officials agree.