Why try to duplicate an ethnic cuisine when you can just turn to someone who makes it for a living? That was the attitude that Binghamton University’s auxiliary services department and Sodexo, the foodservice provider for the upstate New York campus, took when they decided to partner with a local Indian restaurateur. 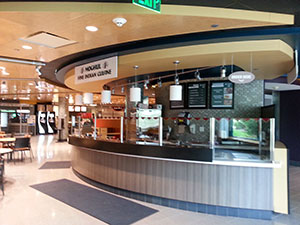 As a result, Moghul Fine Indian Cuisine and Tapas Bar, opened on campus this semester, joining 10 other retail concepts in the Marketplace, the redesigned dining facility that opened last January.

Moghul is open Monday through Thursday, 11 a.m. to 7 p.m., and Fridays from 11 a.m. to 4 p.m. Moghul’s signature dishes include Chicken Tikka Masala, Chicken Vindaloo and Lamb Pasanda. In addition, kabobs and a healthy list of vegan dishes, vegetarian options and Halal meats are offered.

“We have quite a lot of students who have told us they want authentic Indian cuisine,” Napolitano explains. “Moghul is located in University Plaza, near student apartments, and it gets a significant amount of student business, so we approached them about opening a unit on campus.”

Napolitano and members of the Sodexo foodservice team sat down with Adnan Kahn, Moghul’s owner, to hash out details of a partnership. Kahn supplies the personnel to operate Moghul, and Binghamton convinced Kahn to alter the menu to be more in line with most students’ pocketbooks.

“We were afraid that the Moghul menu would be too pricey for students,” Napolitano says. “So we worked with the staff to cut portion sizes down and reduce prices. The average check for lunch is now about $7.50.”

Kahn says he’s pleased with the arrangement that has been worked out with the university.

"As owners of a local restaurant, it is a privilege and honor to be on the Binghamton University campus,” says Khan.  “This partnership is building a stronger community."

The Marketplace is the 15,000-square-foot dining facility in the University Union that was renovated last year. In addition to Moghul, there is one other commercial unit in the space: Red Mango. In addition there are seven Sodexo-designed outlets serving everything from pizza and sandwiches to burritos and breakfast items. There is also a C-store and the Bearcat Café, which is a We Proudly Serve Starbucks location.