Cooking from scratch could be the hottest trend in breakfast among non-commercial operators, according to The Big Picture research. 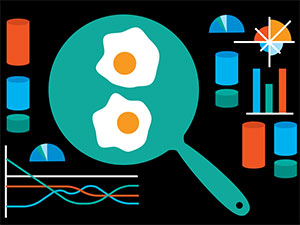 Schools continue to lag behind the other segments, mostly because relatively few schools have the kitchen equipment necessary to do from-scratch preparation. Not only are schools most likely to rely on convenience foods, they also are the segment where the highest percentage of operators (8%) said they expect their use of from-scratch cooking to decrease in the next year.

Scratch cooking is something that customers want for a variety of reasons, says Carlos Rivera, foodservice director for Culinart at Cadwallader, Wickersham and Taft in New York City.

“I think it has become an expectation among our customers,” says Rivera. “They view it as fresher and healthier. For us, when you do it right it can be cost-effective, as well.”

That is true across the board. Overall, 68% of operators said scratch cooking is healthier. Sixty-five percent cite freshness and cost-effectiveness as other reasons to do it.

As a daypart, breakfast increased most in hospitals (64%) over the last two years, and the least in long-term care/senior living (36%).

What percentage of your total business does the breakfast daypart represent? 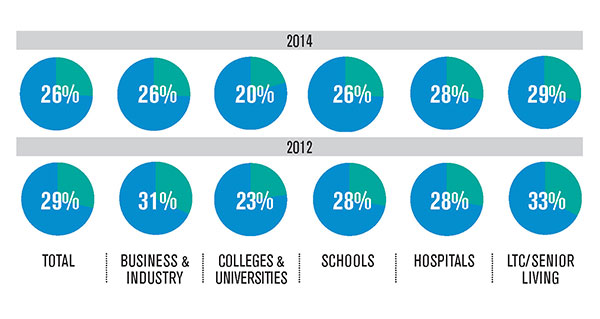 Has your breakfast daypart increased, decreased or remained the same in the last two years, and what do you expect that daypart to do in the next two years?

On average, what percent of breakfast items served are made from scratch?

Why cook from scratch?

Health, cost savings and freshness are the top reasons why operators say they are preparing more breakfast items from scratch. 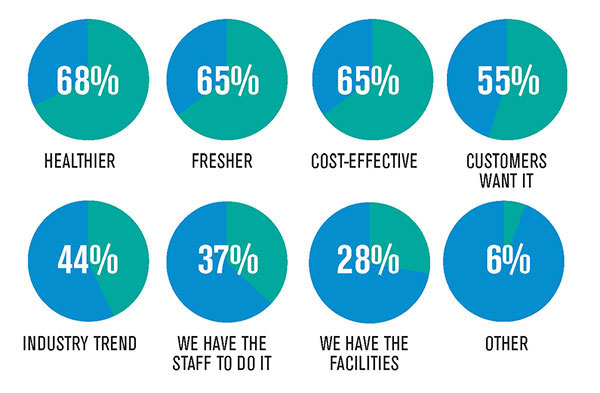 In the next year, our use of from-scratch cooking at breakfast will: 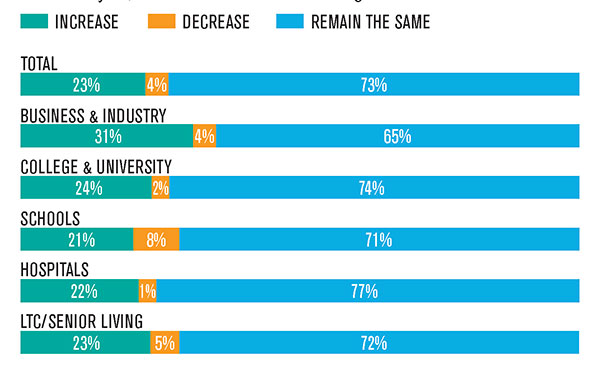 Wrap it to go

Across all segments, breakfast sandwiches and wraps are expected to drive growth in the next two years. 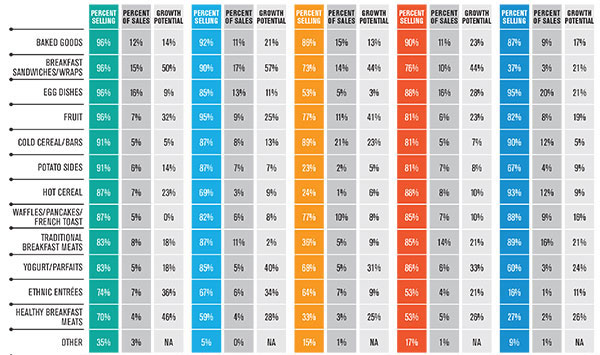 B&I: The movement toward healthier foods continues, with 46% of operators expecting to see growth in the demand for healthy meats such as turkey bacon and chicken sausage and 32% predicting increased sales of fruit. Convenience will also drive sales; 50% of respondents foresee growth in the sale of breakfast sandwiches and wraps. Finally, 36% of operators said they believe demand for ethnic entrées—huevos rancheros, chorizo and breakfast quesadillas, to name a few—will grow in the next two years.

C&U: Convenience with a capital “C” will push breakfast in this market over the next two years. Portable foods will lead the charge; 57% of operators expect to see growing demand for sandwiches and wraps, and 40% predict a rise in the sale of yogurt and parfaits. Other growth vehicles will include ethnic foods (34%), healthy breakfast meats (28%) and fruit (25%). When it comes to ethnic foods, expect items such as congee (Asian rice porridge) to appear on more menus.

Schools: Programs such as breakfast in the classroom tend to drive the menu in school districts, with the most frequently offered items being baked goods, fruit and cold cereal. But as USDA regulations force changes, expect to see the popularity of baked goods decline. Menu drivers will be sandwiches and wraps (44%), fruit (41%) and yogurt and parfaits (31%). Healthy breakfast meats are expected to see a bump vs. traditional bacons and sausages, but only about one-third of schools offer these sides.

Hospitals: Beyond sandwiches and wraps (44%), there are no clear menu drivers in this market segment, according to operators. Yogurt (33%), egg dishes (28%), healthy breakfast meats (26%), baked goods and fruit (23%), and ethnic entrees (21%) all have growth potential in the eyes of at least 20% of operators. Interestingly, only 53% of operators said they offer ethnic entrées or healthy breakfast meats such as turkey bacon. In addition, only 93% of hospitals offer breakfast, the lowest percentage of any market segment.

LTC/Senior living: There is no more “traditional” market than this when it comes to breakfast. Sixty percent of business comes from four items: egg dishes, traditional breakfast meats, cold cereal and hot cereal. By contrast, only 37% of operators offer sandwiches and wraps, 27% offer healthy breakfast meats and 16% offer ethnic entrées. Although 26% of respondents said they don’t expect growth in any category, those predicting growth are betting on healthy meats (26%), yogurt (24%), egg dishes, sandwiches/wraps and traditional breakfast meats ( all 21%).

Smoothies are the only beverage with reasonably strong growth potential industrywide, operators say. 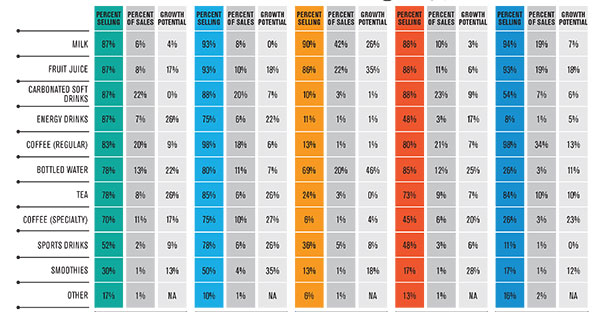 B&I: As millennials move into the job market, foodservice operators expect to see a spike in the sale of energy drinks. Although these beverages make up only 7% of total sales, 26% of respondents said they expect sales to grow in the next two years. Tea (26%) and bottled water (22%) also have growth potential, along with specialty coffees (17%). But sales of carbonated soft drinks could take a big hit; they currently make up 22% of total beverage revenue, but virtually no operators expect to see sales growth from this category.

C&U: Blended drinks will rule the roost on many college campuses in the coming years, according to The Big Picture data. Smoothies (35%) and specialty coffees (27%) have the most growth potential, followed closely by sports drinks and teas (26%) and energy drinks (22%). Bottled water? Not so much. Prompted by student movements on a growing number of campuses away from bottled water, only 7% of operators said they expect to see growth in this category, the lowest percentage of any market segment.

Schools: As beverages trend healthier, one effect of new USDA regulations, bottled water (46%), fruit juice (35%) and milk (26%) are the beverages the largest number of operators cite as having growth potential. Of course, these three drinks already make up 84% of total beverage sales in schools. One beverage expected to begin appearing on more menus? Smoothies. Although they currently make up only 1% of total beverage sales, 18% of operators believe this category will grow over the next 24 months.

Hospitals: Like colleges, a number of hospitals expect to see growth in smoothies (28%) and specialty coffees (20%), two currently minor players in hospital beverage sales. Unlike colleges, however, fully one-quarter of operators expect bottled water sales to grow. Energy drinks, another historically low seller in this market, is the only other beverage expected to see growth by a large number of respondents (17%). Carbonated soft drinks (23%), coffee (21%) and bottled water (12%) are the three biggest revenue generators.

LTC/Senior living: Once again, with an older population, tradition rules in this market. The bulk of beverages sales comes from three items: coffee (34%), milk (19%) and fruit juice (19%). But as boomers move into this segment, 23% of operators expect to see growth in the sale of specialty coffees. Fruit juice is expected to grow by 18% of operators, while 12% of them think smoothies, which currently make up about 1% of total beverage sales, have growth potential.

All about the fruit

Operators in all market sectors agree: Fruit will grow as a snack option. Vegetables? Maybe. 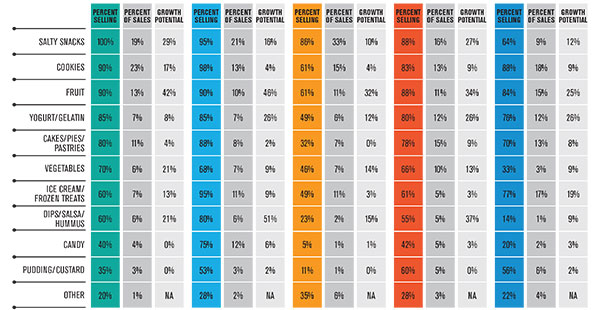 B&I: Cookies and salty snacks may rule now, but in the years to come, fruits (42%) and vegetables (21%) will become more popular in this segment. But neither of the current snack leaders are expected to disappear; 29% of respondents see growth potential in the chips-and-pretzel category, and 17% expect cookies’ popularity to continue. The dips/salsa/hummus category is seen as a growth vehicle by 21% of operators, but candy and puddings will see little love from customers.

C&U: As global cuisines really take hold on college campuses, dips, salsas and hummus will find more favor among students; 51% of operators predict growth in this category, which has applications in Latin, Middle Eastern and Asian cultures. Other growth leaders are expected to be fruit (46%), yogurt (26%) and salty snacks (16%). Colleges are unique in one respect: Every pre-listed snack category is offered by at least 50% of operators surveyed. No other market segment can make that claim.

Schools: The most telling statistic in this market won’t even be found on the chart: Forty-nine percent of operators said they expect no growth in any snack category over the next two years. That’s understandable, given the USDA’s new Smart Snacks rules. The three areas with greatest growth potential—fruit (32%), dips/salsa/hummus (15%) and vegetables (14%)—also reflect the new reality. The yogurt category also shows promise, say 12% of operators. But cookies, currently 15% of total sales, aren’t expected to make the grade.

Hospitals: Hospital operators’ thoughts mirror those of college foodservice: Dips, salsa and hummus (37%), fruit (34%), salty snacks (27%) and yogurt (26%) are considered to be the categories with the most growth potential. Growth of vegetables as a snack is also seen by 13% of operators as likely. Overall, the most popular snacks sold in this market are salty snacks (88%), fruit (88%), cookies (83%), yogurt/gelatin (80%) and cakes, pies and pastries (78%). Candy is the item least likely to be sold; only 42% of operators said they sell it.

LTC/Senior living: Only 62% of operators in this segment said they expect to see any growth in snack sales over the next two years. The greatest potential is expected to come from yogurt/gelatin (26%), fruit (25%) and, surprisingly, ice cream (19%). B&I is the only other segment in which more than 10% of operators expect growth in this category. Ice cream also makes up a higher percentage of overall sales (17%) than any other segment. What doesn’t sell is candy; only 20% of operators say they even offer it.

The Big Picture: A look at the industry in 2014