According to The Big Picture research, women continue to make up the majority of employees in all market segments. Overall, women outnumber men 74% to 26%, with the disparity being greatest in schools (92% vs. 8%) and least in B&I (51% to 49%). 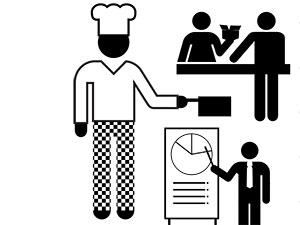 The majority of employees in the industry are Caucasian, at 63%, with 19% being African-American, 11% Latino/Hispanic, 5% Asian/Pacific and 2% Native American. The B&I market is the most ethnically diverse and the segment that hires the largest percentage of Latinos (22%). The highest percentage of African-Americans work in long-term care/senior living (27%), and schools have the least ethnically diverse staffs.

Employees looking for full-time work are most likely to find it in B&I, where 81% of staff are full-time; and hospitals, where 68% work 30 hours or more a week.

Finally, executive chefs are appearing on more organizational charts. Overall, 36% of operators said they have an executive chef on staff. In 2012, when this survey was last conducted, only 29% employed one. Colleges and universities (66%) are where chefs are most likely to be working, and schools (14%) are where you are least

The Big Picture: A look at the industry in 2014