The concept of a branded area within a larger foodservice operation is clear and powerful: When people are away from the comforts of home, what is instantly familiar to them is a big deal. In that arena, the right brand, presented in just the right way, holds great allure. 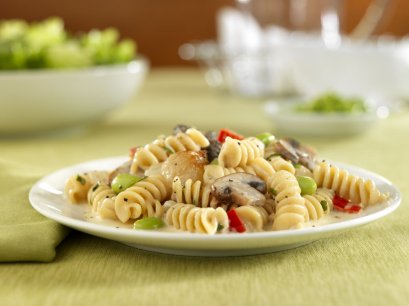 It’s no secret that foodservice operators, accustomed toserving meals to large groups day after day, are savvy about brand recognition and brand quality, both of which they know they can find with Barilla, which rates highly in surveys for “brand you can trust” and “highest quality.”

Made from a signature variety of durum wheat, Barilla pasta holds its shape, cooks consistently, and stands up to the rigors of cooking in large quantities, all of which is naturally appealing to foodservice operators. Barilla’s wide range of pasta offerings makes the brand even more of a logical choice for foodservice. In a 2008 survey, 73% of current college and university Barilla users think Barilla Whole Grain fits well or extremely well into their operation.

Then there’s the consumer recognition factor, particularly appealing to students living away from home; they know and trust the name and the familiar blue box. Those pros who have introduced Barilla-branded pasta bars attest that the brand really does make a difference, to their bottom line as well as, of course, to customer satisfaction, particularly among the younger demographic. “This generation is very brand-savvy,” says Craig Neal, director of business development at Rochester Institute of Technology. “They want brands that they equate with quality and Barilla fits right in there.”

In fact, after RIT launched its Barilla-branded pasta bar five years ago, they saw a 30% increase in sales in that first year. “Using Barilla really helped legitimize the operation,” says Neal. “Before, it was just pasta with sauce, now it’s ‘Oh, it’s Barilla.’ It’s popular, we can draw more students to buy it, it’s a healthy meal for students, and it’s inexpensive for us to make.”

The RIT story does have one unique twist. Barilla is a hometown brand; it’s manufactured just outside Rochester, New York, a fact that, combined with the quality of the product, was a major motivator for Neal to push the idea of a Barilla-branded pasta bar for the school’s dining service.

“I believe in the brand, and it’s local,” he notes, something that appeals to young people interested in quality and sustainability, as well as in supporting the local economy.

However, says Neal, “the quality has to be there; if Joe’s Pasta was made locally, and the quality wasn’t good, we wouldn’t buy it.”

A similar success story occurred at the U.S. Military Academy, West Point, in New York’s Hudson Valley. Here, foodservice made the switch to a Barilla-branded pasta bar in 2012. "There was an immediate response,” says Kevin D'Onofrio, West Point’s director of food service. “We saw an increase in sales, and product quality and the overall look of the pasta station made a positive impression on our patrons.”

The foodservice operation at West Point is not contracted out, explains D’Onofrio, so the fact that it has to self-sustain puts greater emphasis on choosing items of proven value, and Barilla fit that bill perfectly. “We debated whether we should offer brand recognition or to provide items as ‘our own,’ but we feel that with certain products, it’s better to promote that brand because the brand awareness is so high.”

That decision paid off; West Point cadets commented on the switch and definitely tasted the difference.

Schools are not alone in moving toward branded food stations to increase sales and boost the quality of offerings. Healthcare foodservice operations are also seeing the benefits of implementing a Barilla-branded pasta station. For its $6 million retail foodservice renovation, the Strong Memorial Hospital of  the University of Rochester Medical Center (URMC) hit on the idea of separate food stations, and reached out to Barilla, not only for their products but also for their expertise.

“Barilla brought in chefs to develop menus and recipes, and teach our staff the skills on how to prepare the food and present it to the customer,” says Al Caldiero, director of food and nutrition for URMC. “They gave us a lot of support and training.”

The Medical Center’s pasta station offers three pasta types each day that can be quickly and individually prepared with a choice of sauces, meats and vegetables. “It’s the most popular station we have,” notes Caldiero. Since the Barilla station’s implementation, sales are up 15% and customer counts 10%.

“The fact that we only serve Barilla says something to our customers,” says Caldiero. “It tells them that quality is important to us.”