While catering is an important part of many foodservice operators’ revenue, there’s only so much appeal that can be squeezed from a chafing dish. Unorthodox equipment is making its mark, with some operators finding that creativity doesn’t have to be a budget-buster. 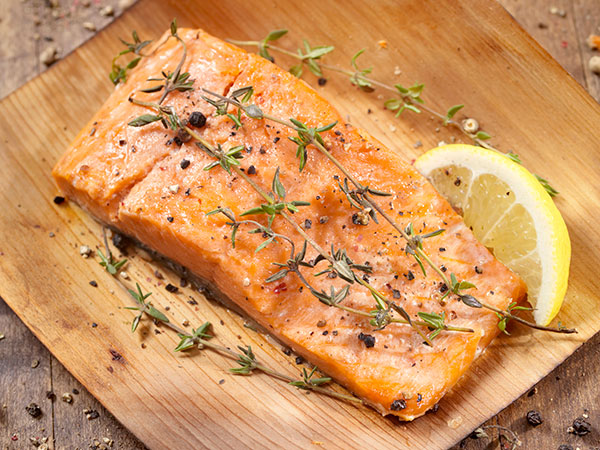 For Lisa Poggas, nutrition and environmental services director at Parker Adventist Hospital in Parker, Colo., that creativity starts even before food is ready to serve. Cedar planks ($5-$10 each) and pieces of granite and slate (about $25-$50 per piece) make a play as both cooking and serving surfaces for dishes including salmon at Parker’s VIP catered events at the hospital, such as artist receptions.

Parker Adventist sanitizes the granite and slate surfaces to ensure cleanliness, and cedar planks typically are a single-use item. “We don’t use any wood that is considered unsafe, and we definitely would never use anything that is pressure-treated due to chemicals,” Poggas says.

Planks are soaked in water or rubbed with oil so they don’t burn quickly, then are topped with the fish and placed in the pizza oven at 500 degrees for about 12 minutes, depending on the thickness. “It gives the salmon a nice aroma and mild flavor,” Poggas says. A lit heating canister beneath the planks finishes the cooking process during presentation.

Vinnie Livoti, director of food services at Blue Cross Blue Shield in Columbia, S.C., agrees that a small, inexpensive change can have a big impact. “Recently, we did a breakfast for about 60 people where we made frittatas in a 10-inch cast-iron skillet and served it fresh out of the oven,” he says. “We rolled the skillets out on a cart and placed them on the table five to 10 minutes prior to guests being seated,” he says. The skillets retain heat so the food stays warm.

Livoti said he wanted to give the guests a different visual than the typical pan of eggs, and he received a good response to the skillets, popular among home chefs for generations due to their longevity. “They really loved it and said it gave a great appearance,” he says. “I went out afterwards and bought about 15 of those skillets.”

He plans to use the skillets to make cornbread at his next event. And as far as transporting the hefty iron cookware goes, Livoti says it’s nothing a cart can’t handle.