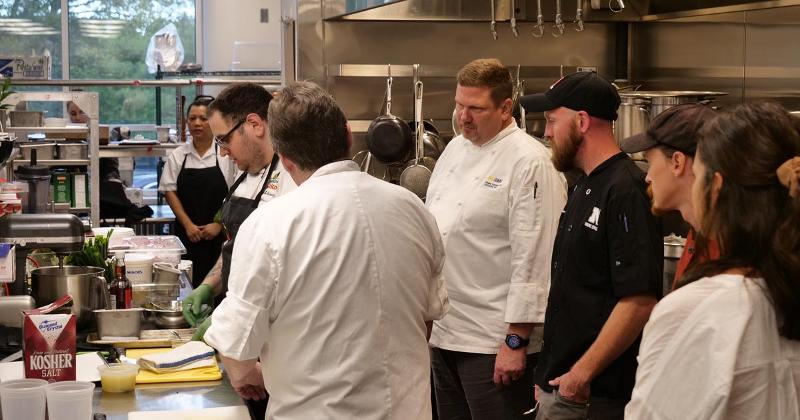 This week, FoodService Director held its first Big Ten Conference Chefs’ Summit on the campus of Indiana University in Bloomington.

Over the course of the three-day event, 12 chefs from across the Big Ten Conference came together to network and cook. They heard from sponsors, crafted recipes in a campus test kitchen and toured local food businesses, including a commissary kitchen renting space to 34 local brands.

Here are a few things we learned over the course of the event.

Jeff Mease, founder of One World Enterprises, is a big believer in open-book management, a leadership style that hinges on transparency. Across his five-unit pizza delivery concept, Pizza X, employees are paid to attend a one-hour staff huddle each week, where they go over metrics such as income statement data, labor costs and guest satisfaction. The secret to the meetings’ success is that they are a shared responsibility among staff, Mease says, as workers volunteer to own different parts of the huddle. While the meetings aren’t mandatory, he’s found that student employees love learning about the inner workings of a business and that the practice helps create job value outside of pay.

However, cash can still be an effective incentive. At Pizza X, staff set a six-month financial goal for the business and work to meet that target. If the results are better than anticipated, the brand takes 25% of the surplus amount and bonuses that back out to the employees. “When you’re sharing the bottom line, we get better together,” says Mease, noting that some pizza deliverers have made an extra $1,000 this way over a six-month period.

Break out of the flavor box.

While most vodkas are known to be made from potatoes and other sorts of inexpensive starches, Cardinal Spirits in Bloomington, Ind., takes a different tack. Its standard vodka is made using grapes, creating an easy-to-drink neutral spirit, co-founder Jeff Wuslich told Summit attendees during a distillery tour. The brand has also diverged from the expected with its Terra Botanical Gin, a variety that dials down the juniper and leans into mint notes.

Plant-based proteins will power on.

More creative protein preps are on the way, says Karla Dumas, director of food and nutrition for the Humane Society of the United States. There’ll be more innovation around whole-food plant proteins as well as the meat analogues we’ve seen “skyrocketing” on fast-food menus, she says.