Look to social media’s Throwback Thursday photos and Facebook Memories, and it’s clear there’s a heavy nostalgia for days not-so-long past. Foodservice operators are tapping into diners’ desire for simpler times with “throwback”-theme meals featuring the food, music and decor of previous decades. 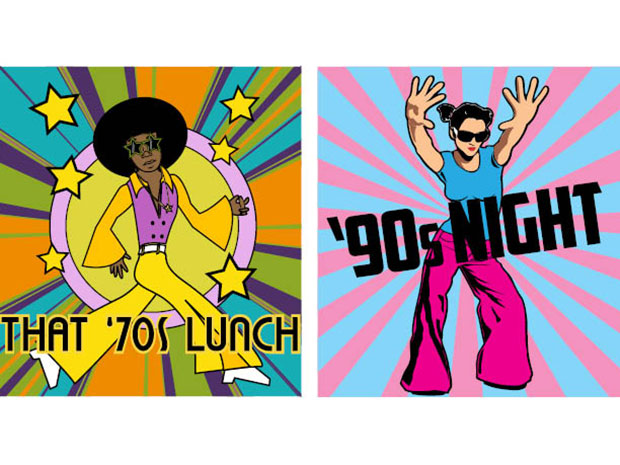 The meals need not be fancy; these are events designed to comfort and delight. The humble boxed mac and cheese was a major hit at Boston University’s ’90s Night party in April, served alongside homemade desserts, shiny candies and the beloved pizza bagel.

“The line was just nonstop for the pizza bagels,” says Robert Flynn, new media coordinator for BU Dining Services. “We couldn’t get over it. The students went absolutely nuts for them.”

Flynn and his team developed a ’90s Night, which, with a 20% increase in student diners, ranked as BU Dining’s biggest event of the semester. Here’s how to ensure your throwback theme is just as successful.

1. Keep the age of your audience in mind

“The ’50s Diner is the [classic] theme, but my parents were the ones who grew up on that—these students have never even seen ‘Happy Days,’” Flynn says.

Old ideas won’t click with new generations. Drum up interest by playing to novelty and nostalgia while keeping the target audience top of mind. Boomers might laugh at the idea of Nirvana and Spice Girls as part of
a throwback playlist— but yes, Kurt Cobain is cozy comfort for Flynn’s students.

2. Build an environment, not just a menu

Ithaca College in New York opted for not one but three throwback meals: late-night dinners from the ’70s, ’80s and ’90s served on consecutive Thursdays with the goal of creating an authentic experience and mixing up the same old.

Seven-layer taco dip and “righteous” ambrosia salad helped Ithaca students feel groovy at the ’70s event, but decor and music elevated the meal, Scott says. Disco balls and bubble machines twirled as ABBA and The Knack tunes blared over the speakers, and students stuck around to spin a ’70s-trivia prize wheel.

“[The students] really appreciate different music, a change in atmosphere, the staff decked out in fun hats,” Scott says. “It doesn’t take that much to create a whole different vibe that makes a familiar spot feel new.”

“If you’re not sure about starting something new, you don’t need to do a full themed menu the first time,” says Flynn. “We did four stations [for our first ’90s Night], but you can try even one or two to feel things out.”

Following the success of the 2016 event, ’90s Night will be an annual dinner going forward, Flynn says, with an expanded menu and more theme stations.

“They have exams and new responsibilities, and maybe for two hours they can go back to when they were little kids having an awesome time,” he says. “Everyone loves comfort. And sometimes all it takes is a pizza bagel.”