College and university dining operations are looking local—and increasingly gluten-free. FoodService Director’s 2015 College and University Census polled 167 operators nationwide on their biggest trends. Here are the facts about our respondents.

Sticking with the meal plan

The bigger the school, the greater the variety of meal plans offered

The majority of colleges (95 percent) offer some type of meal plan. Twenty-one percent of colleges that serve less than 2,000 students per day do not offer a meal plan, while all who serve 2,000 or more students daily—with the exception of one—offer some sort of plan. At those with both declining balance and meal swipes (meals per week/block plans, unlimited plans), the majority—76 percent—say more meal swipes are used than declining balance.

Percentages may add up to more than 100 due to rounding.

Overall, 94 percent of colleges buy some of their food products locally. Produce remains the item that’s most likely to come from a local source, followed closely this year by dairy products. Colleges with annual food and beverage purchases of $1 million or more are significantly more likely than their smaller counterparts to source some products locally (97 percent vs. 77 percent, respectively). The average amount of locally sourced food purchases is 20 percent.

As in 2014, the majority of operators report that gluten-free items will increase on their menus in the  next two years, as will locally sourced foods. 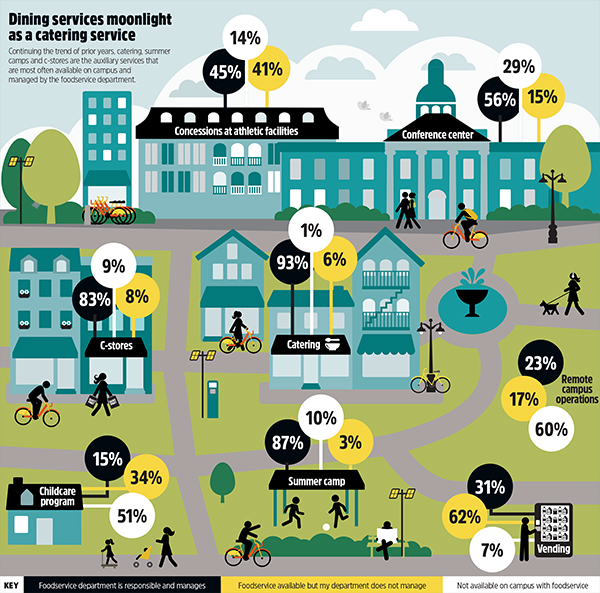 The majority of college and university operators (87 percent) say restaurants located off campus are only a minor threat or no threat to their business. However, operators at locations with 30,000 or more students are significantly more likely than those with smaller enrollments to report these locations are a major threat to their business (31 percent vs. 9 percent, respectively).