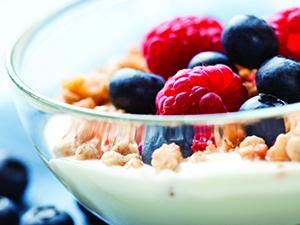 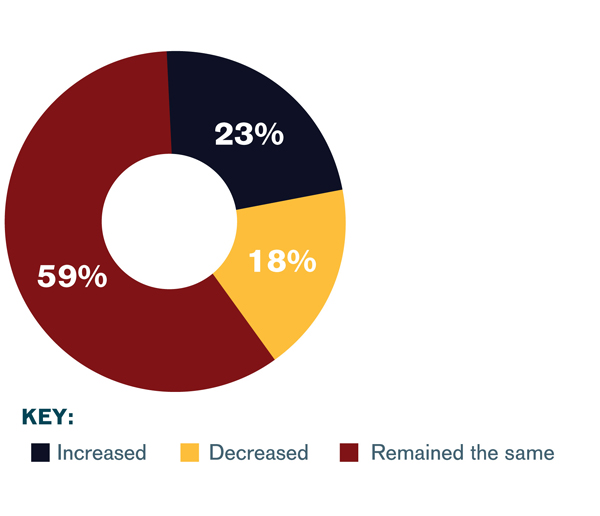 Breakfast Sees Growth
Not surprising, the average number of lunch meals served per day is higher than breakfast meals. However, the number of morning meals did increase this year versus last year across all district sizes. It is important to note that the substantial increase in breakfast meals in districts with 100,000 or more students is mostly being driven by just one district, which serves a very large number of breakfast meals.

43: The percentage who indicated that ensuring that 50% of grain items served at breakfast be whole grains was not too challenging or not at all challenging. Operators in large districts (with 100,000 or more students) were significantly more likely than those in smaller districts to report this as not being a challenge, at 89%.

39: The percentage who are extremely or very concerned about meeting the 100% whole-grain-rich breakfast regulation for the 2014-2015 school year. Districts with 100,000 students or more were significantly more likely than smaller districts to say they were not too concerned or not at all concerned (67% versus 28%, respectively). Fifty-four percent of districts with fewer than 2,000 students report they are extremely or very concerned about this requirement.

52: The percentage who are extremely or very concerned about increasing the amount of fruit at breakfast in the 2014-2015 school year. Operators in districts with 100,000 students or more, however, aren’t as concerned. Once again, larger districts were significantly more likely than smaller ones to say they are not too concerned or not at all concerned (56% versus 21%).

71: The percentage of operators who are extremely or very concerned about implementing the new sodium regulations next year.

18: The percentage of operators who indicated that some of their schools have considered dropping out of the National School Lunch Program because of the new meal regs. That number is significantly higher in districts that serve fewer than 5,000 lunch meals per day than those that serve more lunch meals (26% versus 4%, respectively). Districts in the Northeast are also significantly more likely than other regions to have thought about dropping out of the NSLP (41% versus 11%, respectively).

Grain and Protein Woes
It seems the USDA spared itself some grief when it permanently eliminated the grain and protein maximums last month. Ninety-one percent of respondents said they felt participation would go down if the USDA reinstated these maximums, due to students’ unhappiness with smaller portion sizes. Seventy-two percent of respondents said it would be extremely or very difficult to alter menus and dishes to meet the maximums if they were reinstated. (Editor’s note: Our survey was conducted before the USDA’s reprieve.)

What happened to districts’ lunch counts after the USDA eliminated the grain and protein maximums in December 2012. 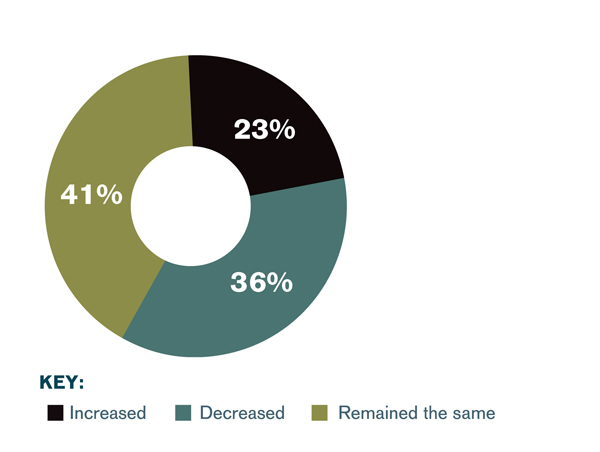 Feeding the Garbage Can
Just like last year, operators are finding more food ending up in the trashcan since implementing the new meal pattern regulations. Fruits and vegetables are being thrown away more often now than before the new regs began. Seventy-seven percent of operators said students are tossing more produce now. That’s up seven percentage points from last year’s survey. Two other menu items are being thrown away more now than last year. The percentage of operators who said entrées were being thrown away since implementing the new meal regs doubled this year when compared to last year (18% versus 9%, respectively). Milk was the other area (9% this year versus 4% last year). Not all districts are having such problems, however. Those districts that serve 20,000 or more lunches per day were significantly more likely not to encounter any of these problems than those who serve fewer lunch meals per day (50% versus 10%, respectively).

We asked operators to tell us how challenging it was to implement several aspects of the new lunch meal pattern regulations. The following percentages are for those operators who rated the statement a 6 or 5 on a six-point scale, where 6 is Extremely Challenging and 1 is Not at all Challenging.

38%
Increasing the serving size of fruits and vegetables. Districts with fewer than 2,000 students (56%) were significantly more likely than those with more students to rate this a 6 or 5. Operators also report that this aspect is more challenging to meet this year than last year. Only 20% rated this a 6 or 5 on last year’s School District Census.

31%
Meeting whole-grain requirements. Larger districts (those with 100,000 or more students) were more likely to say this wasn’t a challenge; 56% rated it a 2 or 1.

48%
Implementing menus based on age/grade group