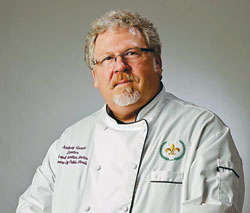 “I was never very good at following the rules,” Tony Geraci once admitted. However, that rule-breaking, whatever-it-takes attitude is exactly what has enabled him to make waves in child nutrition.

Take his time in Baltimore City Schools, when Geraci turned an abandoned 33-acre lot into the Great Kids Farm, a learning laboratory for students to experience the produce life cycle firsthand. The project had little funding from the district, so Geraci turned to the community and invited them to lift a hand—literally—in the farm’s creation.

Never afraid to ruffle feathers, Geraci has publicly challenged the people around him to step up to the plate to better the lives of the children he’s serving. And when he feels they aren’t living up to their end of the bargain, Geraci isn’t afraid to call people out. Geraci is the kind of man who isn’t concerned about himself. In a time when job security is often priority No. 1, Geraci left Baltimore because he felt he could no longer make the changes he wanted to make. After a year of consulting for other districts in the “Word According to Tony,” Geraci has landed at Memphis schools, whose foodservice department was tarnished by an audit scandal in 2007.

Geraci has made quick work of his time in Memphis. He’s created another farm-to-school program, started an after-school supper program to feed hungry students, expanded the breakfast program and used the department’s huge central kitchen to return to scratch cooking.