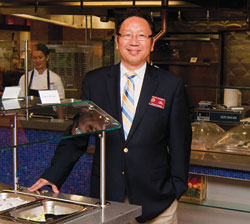 It’s exhausting for us as trade journalists to keep up with Ken Toong, so imagine what it’s like for his staff. Toong has turned the dining services department into a renowned entity—in 2011 alone UMass Dining was honored with three national awards. During his tenure at UMass, Toong has increased meal plan participation from 8,900 students in 1999 to 16,075 in 2011. While many operators may have accomplished similar feats, the difference is Toong is eager to share what he has done in order to help others reach similar heights.

“For the amount of kidding we do about Ken and the UMass program, he truly is an innovator and leader in our industry,” says Jon Plodzik, director of dining services at the University of New Hampshire in Durham. “How he juggles it all none of us knows, but he keeps everyone trying to catch up.”

Toong’s commitment to authentic ethnic cuisines and to small bites with big flavor is something that has been replicated at many other institutions. In terms of local purchasing and sustainability, his department has checked every box, including a permaculture garden that was recently recognized by the White House. On top of all that his department has accomplished operationally, Toong also is the creator and host of the Tastes of the World Chef’s Culinary Conference, now in its 18th year.

“[The chef’s conference] unlike any other conference is filled with people in our industry who are dealing with the same issues that I am as an operator,” says Paul Nicolini, culinary manager at Pennsylvania State University-Wilkes Barre.

“A lot of the conferences I’ve been to are very clique-y. This conference is not. I think that comes from Ken. He is just a very outgoing person. To be able to bring in some of the best chefs in the world for people to meet, talk to, get ideas from and learn from is just amazing to me.”