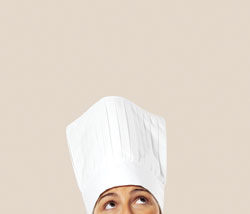 There is no doubt that celebrity chef worship has had a tangible effect on modern foodservice like never before. With the rise of the Food Network, “Top Chef” and countless other food-obsessed media, every customer has become a critic, and often what satisfies them is food with an aura of fame. And it’s not just the customers who have starry eyes.

“I know that [celebrity chef culture] motivates our younger chefs,” says Ron DeSantis, director of culinary excellence at Yale University. “Celebrity chefs get the more mature chefs thinking, but they really fire up the younger chefs. I have a couple of them ask, ‘How can I get on ‘Chopped?’’’ I think that is great because it tells me that everyone here is alive and well in their professions and they’re not just sleeping on the job. They are excited about cooking and being a chef.”

The most interesting thing about how celebrity chefs influence non-commercial markets is the variety of ways the culture pops up in operations. The most obvious cases of celebrity chef power wielding are Jamie Oliver’s “Food Revolution” and Michelle Obama’s Chefs Move to Schools initiative. Both these efforts use the weight of famous chefs to try and enact real change—for better or worse—in foodservice, especially in school meals. Another aspect of this culture’s reach is the celebrity chef partnerships that bring in recipes to operations, such as Marcus Samuelsson’s street foods concept at Restaurant Associates cafés or Mai Pham’s Asian cuisine at Sodexo accounts. Finally, there are the tried-and-true guest chef series that bring these chefs into operations for cooking demonstrations and to help train and inspire staff.

A senior-living chef takes it outside