With a goal of making menus healthier, operators across all market segments are increasingly turning to alternative sweeteners such as honey, maple syrup and agave to reduce their reliance on granulated white sugar. 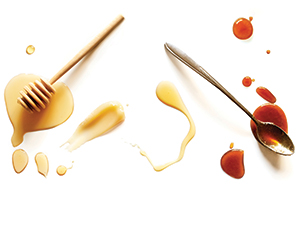 At the University of Connecticut in Storrs, Conn., culinary operations manager Rob Landolphi says his department uses less refined white sugar than it has in the past.

“I think alternative sugars offer more depth of flavor,” Landolphi says. “When you add sugar, it’s just adding sweetness. When you add something like maple syrup, molasses or honey, you’re actually layering a flavor. It develops the dish more.”

Landolphi isn’t alone. According to Datassential’s 2014 MenuTrends study, a growing number of non-commercial operators are using alternatives to granulated white sugar. Honey is the most popular alternative, with 48 percent of college and university foodservices now using it.

How operators are using honey

For his pistachio whoopie pies, Landolphi combines yellow cake mix, water, vegetable oil, eggs and pistachio flavored instant pudding mix to make the cookies. They are baked for 13 to 15 minutes in a 350-degree oven and then cooled. To make the filling, he whips together honey, shortening, confectioner’s sugar, salt and vanilla until it’s fluffy.

“People are watching their sugar intake,” Landolphi says. “By using honey we can use less sugar, and that is reflected in the calorie count. From a marketing standpoint, any time we add one of these sweeteners to the dish’s description, people jump on it because they think the dish is more natural.”

Tyler Ehlert, executive chef at McKay-Dee Hospital in Ogden, Utah, says working with honey adds a rustic flavor to entrees such as his honey paprika salmon. To prepare, he places salmon fillets on aluminum foil and drizzles a blend of honey, paprika, salt and pepper over each fillet. He seals the foil and bakes the salmon at 325 degrees for 7 to 10 minutes.

“You have to be careful with honey because, as decadent and sweet as it is, it can overwhelm a dish,” Ehlert says. “But I love using it because it’s a step back to real cooking.”

Simon Stevenson, pastry chef and bake shop manager for UMass Dining at the University of Massachusetts, in Amherst, Mass., makes a popular honey wheat bread using local honey, water, yeast, high-gluten and whole-wheat flour, canola oil, malt syrup and salt. The dough is mixed, folded and baked at 380 degrees for 10 minutes. To finish, Stevenson opens the oven door to release steam and bakes the bread at 370 degrees for an additional 10 to 15 minutes.

“It’s a really nice bread,” Stevenson says. “It has a delicate honey flavor to it, and the whole wheat gives it a nutty flavor that goes well with the honey.”

The use of other natural sweeteners such as agave and maple syrup are also on the rise.

For example, to add flavor to roasted carrots, Cantalupo whisks agave with olive oil, salt, pepper, sage and thyme. He coats the carrots with the mixture and then roasts them in a 400-degree oven for about 20 minutes. “The oil helps stretch the agave out,”  he says, adding that agave “can get goopy.”

To make his maple bread pudding, Stevenson places raisins and cubed stale baguettes into hotel pans and pours maple syrup over them. He then soaks the bread and raisins in a mixture of heavy cream, eggs, granulated sugar and vanilla extract for about 35 to 40 minutes. Finally, he bakes the dish at 325 degrees for 35 to 45 minutes.

Then, to raise the flavor profile of the Jack Daniels sauce that tops the dish, Stevenson blends maple sugar—also made from sugar maple tree sap—butter, eggs and bourbon.

Says Stevenson, “These sweeteners can add a different flavor profile that really makes you take notice.”