American travelers stopping in at a McDonald’s or Papa Johns in another country are often surprised to see items that never make it to the menu back home.

Every quarter, Technomic’s Navigator Program tracks these items to reveal the food and drink trends emerging in U.S.-based chains around the world. Here are nine highlights from the Fall 2022 Global Menu Innovation report.

Wendy’s in Argentina transforms a classic Philly cheesesteak into a burger by layering beef patties with feta and melted cheddar cheese, topped with sauteed vegetables on a brioche bun. Philadelphia cheesesteak ingredients are increasingly finding their way onto burgers and pizza.

A burrito LTO at Taco Bell in Brazil is filled with a local sausage: Linguica Calabresa. Also in the mix are more classic burrito ingredients, including rice, jalapeno, onion and cheese, all rolled up in a flour tortilla. The trend: localizing a mainstream menu item with a protein identified with the country’s cuisine.

There’s no mention of pizza in the name of this menu item from Papa Johns in Chile. But these cheese bread sticks, often served as a side at pizza concepts in the States, get upgraded with premium ingredients. Guests can customize them with vegetables and sauces to add a chef-inspired touch, choosing from corn, onions, jalapenos, mushrooms, pineapple and black olives as well as pesto and barbecue sauces.

Subway is ramping up menu innovation in the U.S., as evidenced by this summer’s launch of 12 chef-created sandwiches in the Subway Series. But France’s Chicken Harimous hasn’t yet crossed the Atlantic. This sub combines harissa-spiced chicken with creamy hummus, taking customers on a flavor adventure to North Africa and the Middle East. 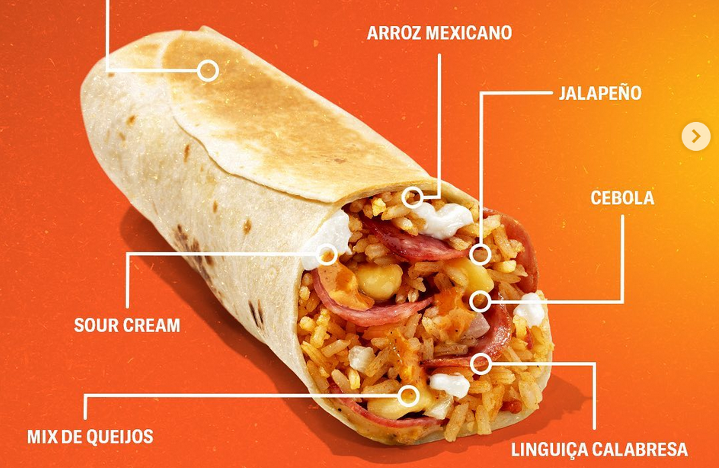 A burrito LTO at Taco Bell in Brazil is filled with a local sausage: Linguica Calabresa. / Photo courtesy of Taco Bell Brazil

The menu at KFC in India offers tortilla chips topped with popcorn chicken to create a multi-cultural snack or loaded side. The Doritos chips come covered with crunchy fried chicken bites, and are served with two sauces: masala salsa and cheesy jalapeno. Technomic predicts that inventive snacks and sides will grow as a menu category.

Pizza Hut in Japan is dodging higher wheat prices with the addition of a rice pizza crust to its core menu. The dough is made from 100% domestic rice and comes in three global variations— Japanese, European and American—each featuring topping ingredients inspired by that country or region.