Sales at the bistro at Glenrose Rehabilitation Hospital, part of the Capital Health network in Edmonton, Alberta, are up 19% and catering is growing since the hospital overhauled its cafeteria, ditched all deep-fryers and revamped the menu with more healthful items. 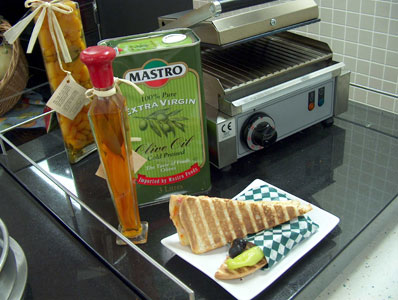 The facility has gone from operating at a deficit before the revamping to breaking even within its first three months. “We’re ahead of schedule in terms of financial performance,” he asserts, adding that significant growth in catering sales—approximately 270%—is the “gravy” of the program at the 400-bed rehab hospital.

Glenrose Bistro is generating a daily average of $1,400 to $1,500 in sales, compared to $1,200 before the renovation. The check average is $3.44, up about 6.5% over the previous average of $3.23. “Lunch spending has gone up,” says Khan, noting that there have also been some price adjustments. “We changed prices, but still kept them moderate, because we know there are thresholds we can’t cross.”

Frying away: One threshold the hospital did cross, however, was the elimination of the old cafeteria’s top two sellers—french fries and fried chicken fingers. Khan says the menu items and recipes the bistro uses had to pass muster with the resident dietitians who established guidelines including criteria for the amounts of fat, fiber and sodium that should be in each.

This approach fits with a Capital Health initiative called Weight Wise, a program offering support, treatment and education in weight management. Glenrose was the first hospital in the system to implement it.

A particularly popular item at the bistro is the rice bowl, which is a mix of chicken, brown rice and other grains pre-cooked in a wok and then held in a display case, since it can take up to five minutes to prepare. Other strong performers are the panini sandwiches and the bistro feature of the day, which includes such entrees as oven-roasted chicken, salmon filet and pasta dishes.

“We’re staying away from the processed foods and using fresh ingredients as much we possibly can, and that’s meeting with success from our customers,” he reports.

Together, the redesign and the new menu reap many rewards, both tangible and intangible, according to Khan. Food costs are under target, for example. And though labor costs bumped upwards a bit with the decreased usage of pre-processed foods and the increase in display cooking, Khan says labor costs are coming down progressively, and are countered by greater control of portion sizes and decreased waste—not to mention happy customers.