Thanks to prolific fast casuals such as Chipotle, guests have come to expect a certain level of customization in their dining options. For almost 50% of Generation Zers, customization is a deciding factor when purchasing food, according Technomic’s 2016 Generational Consumer Trend Report. Taking customization even further, operations are handing over even more control to customers with both build-your-own and cook-your-own stations. 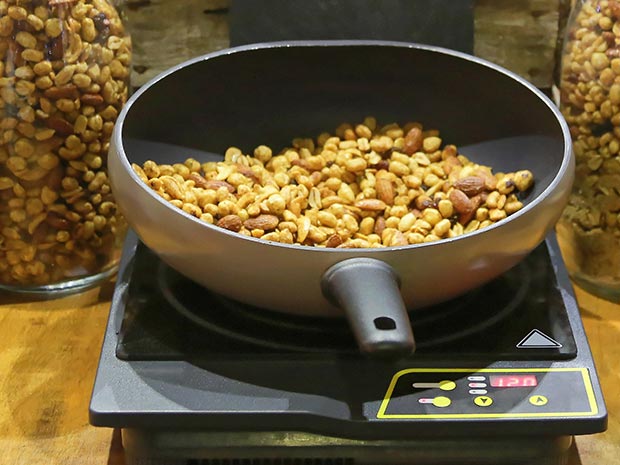 Elder Hall’s My Kitchen station at Northwestern University in Evanston, Ill., offers a daily rotating ingredient bar with items such as stir-fry, pasta, paella, Indian curry, Asian noodles, quesadillas and risotto. Students choose their ingredients and then prepare them at induction burners, with the unit’s executive chef providing cooking tips along the way.

The dining hall is on the outskirts of campus, and has seen a 10% to 12% increase in dinner transaction counts since that station opened. “It’s hands-on, educational and customizable, without increasing the labor model at a location that wasn’t seeing the highest traffic,” says Chris Studtmann, district executive chef for the university.

Martin Luther College in New Ulm, Minn., also offers three induction burners where students can whip up breakfast omelets in the morning and rice bowls and burritos for lunch and dinner, says Gary Schwichtenberg, food services manager. Students can choose from eight sauces, 18 spices and a choice of chicken, ham, beef or pork, and are encouraged to incorporate anything from the salad bar or any of the other stations.

At Northwestern, the chef supervises the station to ensure the food’s safety isn’t compromised. Sneeze guards and temperature-controlled units also help regulate the station. Induction burners aren’t hot to the touch, but oven guards on hot pans help students safely navigate the cooking process. All utensils are changed out to reduce the threat of cross-contamination.

Both operations see the cook-your-own stations as an opportunity for student engagement. “We’ve seen students want to get involved with learning and cooking,” Studtmann says. “People are much more exposed now than they ever have been, and that has generated a lot of excitement.” At Martin Luther, students submit recipes from the station ingredients, which are kept in a binder next to the station. “It gives students a chance for creativity outside of the five-week menu cycle,” Schwichtenberg says.