As part of the Culinary Workshop series “World Cuisines,” at MenuDirections 2012, Marion Gibson, National Culinary Director, Lifeworks Restaurant Group/Aramark Corp., will present on the topic “Mediterranean—A Taste of Six Cultures on Small Plates.” As interest in Mediterranean cuisine—with its ingredient variety and health factor—has grown, questions about how to menu this type of food have come up in operations across all market segments. 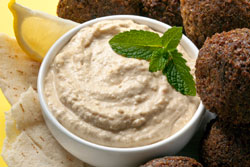 During Gibson’s presentation, she will discuss why Mediterranean food is worth the effort, with an emphasis on the low cost and high value of Mediterranean dishes as well as its fairly easy cooking methods. Gibson will then take a look at what countries actually qualify as offering Mediterranean cuisine.

The session will conclude with a tasting of small plates from six cultures including Spain, Italy, Greece, North Africa and France. Possible dishes include a roasted beet root salad with cumin vinaigrette and pistachio from North Africa, grilled stuffed grape leaves from Greece and a Provençal white bean salad from France.

MenuDirections 2012 takes place Feb. 26-28 at the Charleston Marriott, Charleston, S.C. Mediterranean—A Taste of Six Cultures on Small Plates will be staged twice Monday morning of the conference, in conjunction with The Taco: Re-invented with Latin Flavors and Craving Korean.

MenuDirections 2012: Look for Updates on Awards and Trends