Chefs have been listing the provenance of ingredients and products on foodservice menus for quite some time.

Now, operators of stadiums, arenas and convention centers are taking up that practice and then some as a way to support small producers, align with a mission and connect with customers.

“It is very important to us that the food and drinks we offer at Forest Hills Stadium have an authentic connection to our community,” said Jason Brandt, general manager of the concert venue located in Forest Hills, N.Y. “One of our newest additions is Small Axe Peppers, a New York City-based hot sauce company that supports community gardens. We've integrated their Queens 7 and The Bronx sauces into our food and drink offerings and even have some of their peppers growing in our backstage garden.”

The products are now part of the condiment selection at participating food vendors in the stadium. Guests can also have a bartender spice up a margarita, bloody mary or paloma with the sauces.

The collaboration was born from a shared mission by Small Axe and Forest Hills Stadium to give back to their communities. The stadium has also partnered with favorite neighborhood dining spots, including Jade Eatery and Stacked Sandwich, as food vendors.

Playing ball with the locals

Delaware North, which manages foodservice at a number of ballparks and arenas, is also aligning with local and mission-driven producers.

This season, Petco Park in San Diego partnered with Sambazon, an organic, fair-trade acai company based in San Clemente, Calif. For the first time at the stadium, the product is going into a variety of plant-based bowls, including a Berry Bowl, Chocolate Peanut Butter Bowl and a Protein Bowl. Plus, one of the vendors is serving up an Acai Margarita. 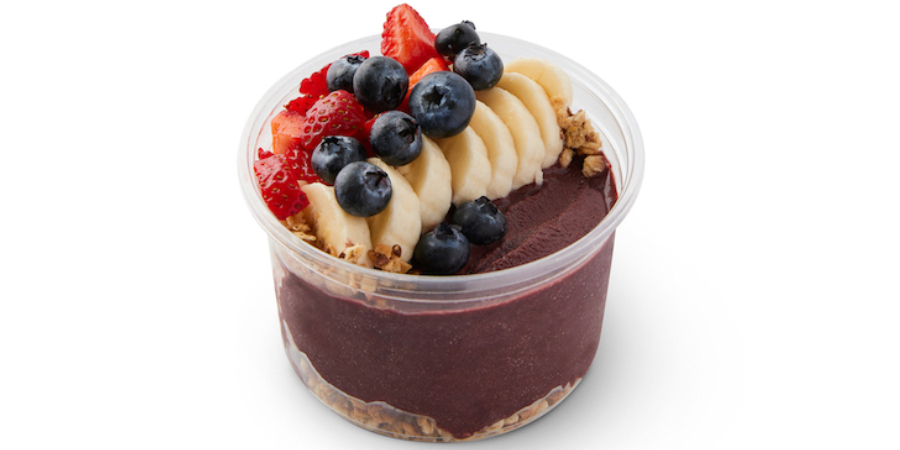 Upcycle Foods made its debut at Target Field in Minneapolis. The company’s no-waste pretzel bun is made with local brewers’ spent grains and is the carrier for an Italian Grinder filled with capicola, mortadella, ham, salami and provolone cheese.

And at Climate Pledge Arena in Seattle, which says it is the most sustainable arena in the world, ingredients and food products are sourced from nearly 40 vendors within a 300-mile radius. Farmer-owned cooperative Puget Sound Food Hub provides produce, dairy, seafood, meat, honey, spices, herbs, condiments, bread, desserts and snacks, all distributed by local company Harbor Foodservice.

In addition, the arena signed on to the Climate Pledge, an initiative from Amazon and organization Global Optimism, making a commitment to reduce carbon emissions, eliminate single-use plastics, achieve zero waste and conserve water.

The Museum of Science and Industry in Chicago, managed by Sodexo Live, has also boosted its sustainability efforts. The destination now features Drink Open Water, a local, women-owned business that helps reduce the use of plastic.

Sodexo-operated Niagara Falls Convention Centre in Niagara Falls, Ontario, just over the U.S. border, alerts customers to its sourcing ethos right on the catering menu: “We work with our suppliers to ensure that our products are sourced in the following order, Niagara first, Ontario second and Canada third.”

Executive Chef James Price had made it his mission to partner with local producers, including Dawson’s Hot Sauce, Southridge Jams, The Bagel Oven, The Udder Way Artisan Cheese Company and Fresh Niagara Mushrooms—all noted on the menu. This summer’s breakfast lineup includes smoothies made with Niagara cherries, buttermilk pancakes with Niagara maple and a toast station featuring Southridge Jams.

Across the country at the Hollywood Bowl in L.A., restaurateur Carolyn Styne is building awareness through hands-on California wine tastings. During the 2022 summer season of the Los Angeles Philharmonic, she is heading up Winemaker Wednesdays and Sunday Market Tastings featuring local wines and beers she selects.

“I love being able to bring local winemakers, brewers and wine professionals together with our guests, face to face, to enhance the overall food and wine experience at the Bowl,” Styne said in a statement.

The complimentary guided tastings, which take place two hours prior to the concerts, expose participants to smaller California producers, including Springboard Wine, Grace Wine Company, Habit Wines, Stone Brewing and Calidad Beer. The products can then be purchased at Hollywood Bowl Food + Wine locations within the concert hall and in the marketplace in the plaza.