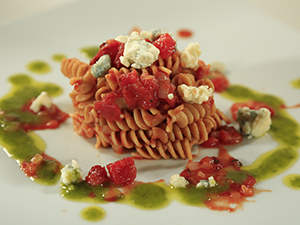 As more and more college and university students seek out whole grains in their meals, dishes featuring whole grains are on-deck to become menu mainstays.

According to Barilla, whole-grain pasta has grown its share of the pasta category in foodservice to about the same level as retail—about 10 to 15 percent depending on the region.  “With whole grain pasta, I don’t know if we are there yet, but I think we will get there eventually,” says Greenberg.

But even so, whole-grain pasta has passed the inception phase and has become a familiar menu offering on some college campuses.

That bodes well for increasing acceptance of whole-grain pasta on campus menus. “Some students, especially four or five years ago, didn’t like the look or the taste of it,” says Eberhart. “But now, the acceptability is much higher.”

Similarly, at the University of Washington in Seattle, whole grains have made huge strides among students, says Campus Executive Chef Tracey MacRae.

“People are more focused on getting whole grains into their diets,” says MacRae. In fact, a chef can be “less stealth health” and “more in-your-face health” with whole grains now.

Made-to-order pasta bars at Washington offer students a serving of whole-grain penne or rotini plus their choice of fresh, seasonal produce and sauces. Other add-ons include feta and cotija cheese, grilled chicken and other proteins. “You walk away with a kind of a meat-and-three plate, or really a pasta-and-three plate,” says MacRae.

As with many ingredients, trial is key to success. “If we can lead young adults to try things that are more ethnically diverse or healthier, nine times out of ten they love it,” says MacRae.