Not long ago, chef Rick Farmer got a call from a mom who was desperate. 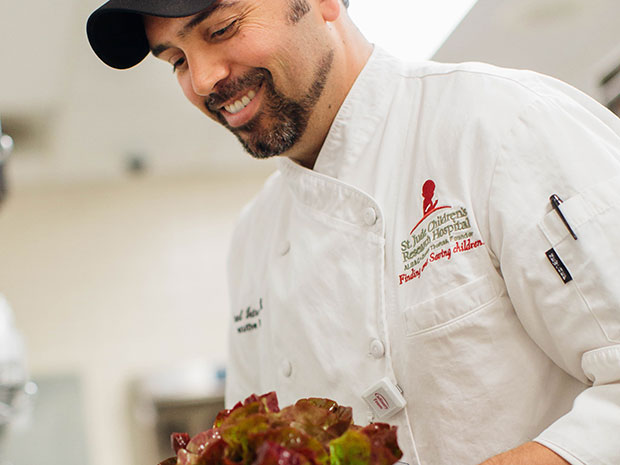 Her little boy was being treated for cancer at St. Jude Children’s Research Hospital in Memphis, Tenn. And he hadn’t eaten in seven days.

Farmer offered to prepare the young South Korean patient a taste of home. But the boy’s mother was sure he couldn’t get the ingredients or flavors right. Her son loved black-skinned chicken stewed with ginger, garlic and carrots in a clay dish with healing properties, she said.

There was just no way a chef could do that in the middle of Tennessee.

By evening, Farmer was scouring Memphis’ leading Asian market for the right ingredients. He made a recipe for a stew of black-skinned Silkie-breed chicken. The resulting dish was what the New York Times has called “liquid penicillin.” The little boy gobbled it up.

“He told me I needed to make that for every child at St. Jude to make them feel better,” Farmer remembers. “That really got me.”

The Silkie chicken stew recipe went into a folder with the dozens of other extra-special dishes that Farmer, executive chef of training and development, and Michael Vetro, executive chef of culinary operations, have prepared at St. Jude in the past few years. The two chefs thrive on learning the finer points of international cuisines for patients from India, Peru, Serbia, Saudi Arabia, Jamaica, Venezuela and beyond.

These chefs’ daily challenge is not only energizing 5,000 St. Jude doctors, nurses, researchers and support staffers with great food, but also making sure that the hundreds of special patients get the nutrition and comfort they need to heal from some of the world’s most confounding illnesses.

When a parent or child makes an off-the-menu request, the two chefs never say no.

Food as medicine is a big trend. But the St. Jude co-chefs are careful about making those kinds of claims. Instead, they say the nutrition and tastes of home they provide fuel the mind and body for the rest of what amounts to, even more than a marathon, a grueling “Ironchild” race. “Similar to professional athletes, we almost prime the pump for your body to be able to take on the next challenge,” Vetro says.

Both Farmer and Vetro were exposed to the restaurant industry early.

Farmer started washing dishes at a Memphis hotel when he was 16. Young and wandering, he soon found an opportunity in San Francisco that took him west, then another that delivered him to a “Southern fine-dining” restaurant called Memphis in New York City. Apprenticing in France allowed him to learn continental cuisine while traveling Europe, before marriage brought him home to the real Memphis.

An outdoorsy kid, Vetro liked gardening and never passed an apple tree without snagging a fruit in his adopted hometown of Boone, N.C. At age 11, he made his first souffle in a pumpkin using a Martha Stewart recipe. A job waiting tables at a burger joint turned into a two-year stint at a catering company. The New England Culinary Institute was next; later, a country club.

Both chefs spent years owning their own restaurants before discovering hospital foodservice. Farmer, patient and even-tempered, had taught at a local culinary school. At St. Jude, he has developed a training program for young cooks. Vetro, a fast talker and big-picture thinker who learned to value setting and presentation through his stints in catering, manages daily operations.

The chefs now oversee a staff of 85. Their kitchens turn thousands more dishes per day than they did in their restaurant days. Luckily, they’ve both found they like scaling up. “I like the challenge of managing this many people and seeing this machine turn,” Farmer says. Adds Vetro: “I actually enjoy the volume. I find it amazing that we can serve 5,000 meals a day, seeing just how many people we can satisfy in a sweep.”

Farmer is elbow-deep into developing plant-based dishes that impress and satisfy. Having mastered heavy French sauces long ago, he’s now more tuned in to Mediterranean flavors like schug, an herby-peppery-garlicky hot sauce. “I think we’re right at the beginning of a huge push for vegetable-forward cooking, less meat protein in the diet,” he says. “I’m just totally into it, and it’s wonderful. It forces a chef to be much more creative.”

Managing the trend toward customization has also challenged the co-chefs. They have 10 stations in their food hall-style dining room, serving up everything from burgers to sushi, comfort food and healthy choices. The deli station at one point offered 60 sandwich toppings. They dialed back the excess of options while making the space even more attractive.

Bringing in a new on-demand ordering app, Tapingo, has also been helpful. Customers can order and pay through the app, and they’re notified when their meal is ready to be picked up, usually less than three minutes after ordering. “It’s better data than a production sheet, knowing that we’re not going to throw away that food,” Vetro says. “In an industry this large, [we have to] trim down the [service] time and make it easier on our staff.”

Vetro sees organic as a movement with staying power, even for large-scale foodservice operations like theirs. Producers, he says, will help drive the change as customers—members of the next generation that the chefs currently serve at St. Jude—demand it. “Once they’re convinced and the prices start becoming equal, you lose the stigma. We’re moving that way,” Vetro says. “Now it is just as important to appreciate what a real carrot, a humanely raised animal, or pasture-raised pork tastes like. I’m thinking farming is going to drive the foodservice industry. The next generation of guest is interested to know where their food comes from.”