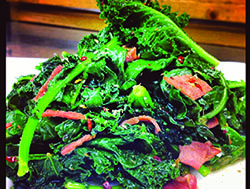 Want a side of fries with that? Not so much. Nowadays, more non-commercial operators are offering fresh, creative side dishes that aren’t just delicious—they’re nutritious, too.

Getting diners interested initially isn’t always so easy. “It can be a little tricky when you try to take someone’s french fries or tater tots away from them,” says Patrick Browne, executive chef of UM Dining at the University of Montana, in Missoula. To strike that delicate balance between health and great taste, UM Dining “tries to provide [healthier side dishes] that are full flavored and can stand on their own,” Browne says. Chickpeas cooked in a vegetarian broth with North African spices and olive oil are often served with chicken strips, while mushy peas (simmered and mashed peas seasoned with salt and pepper) play a traditional accompaniment to British-inspired fish and chips. “Maybe it’s our attempt at cutting back overall on fried foods, but we really try to avoid having a fried side item next to a fried entrée,” Browne says.

For other non-commercial operators, the focus is on vegetables. At Union Public Schools, in Tulsa, Okla., fresh produce—often sourced from local farms—plays a starring role in a wide selection of sides. Broccoli slaw is studded with dried cranberries and turkey bacon and tossed with a honey mustard dressing; roasted carrots are made sweet, smoky and spicy with the addition of honey and chipotle; and the cherry tomato salad is tossed in a housemade pesto using basil from Peachcrest Farms in nearby Stratford, Okla. The standout recipe, though, might be the kale braised with garlic and chili peppers. “It’s been a surprise favorite at Union High School,” says Executive Chef Eli Huff.

Vegetables dominate the side dish offerings at Chesapeake Public Schools, in Virginia, too. “We’ve been working to incorporate more orange and red vegetables and more beans into our side dishes,” says Joanne Kinsey, director of school nutrition services. Baked sweet potatoes and apples, flavored with brown sugar, cinnamon and nutmeg, fit the bill and serve up a sweet flavor that’s appealing to kids.

A bean salad makes a satisfying, economical side, too. Chesapeake’s version—tossed in an oil and vinegar dressing—uses green beans, kidney beans and garbanzo beans and gets extra crunch and flavor from chopped green pepper and sliced onions. When all else fails, don’t forget pasta salad: When made fresh with vegetables like broccoli, carrots, onions, green peppers and grape tomatoes, as Chesapeake prepares it, the dish is a classic, crowd-pleasing side that packs a healthy punch.