Simmons Hall, on the campus of Pennsylvania State University in University Park, has been called a health food facility and a haven for vegetarians and vegans. Lisa Wandel, director of residential dining for the university, would just like it to be known as a place where students can get really good food.

But for now, Wandel is simply satisfied that the concept has begun to take hold within the campus community.

“Our biggest success is that students love it,” says Wandel of the reconceived dining hall, which opened with its new menu in September. “We’re getting good feedback, and there is great word of mouth about the concept.” 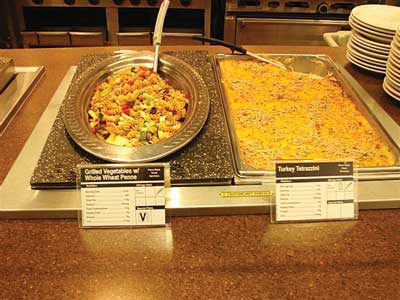 Simmons, one of six residential dining facilities on the 45,000-student campus, was converted to a healthy dining center at the start of the current academic year. Wandel and chefs Paul Nicolini and Mark Kowalski spent the summer testing 110 recipes to fit requirements for heart-healthy, low-fat, low-calorie and otherwise healthful parameters.

What they have come up with is a three-week cycle of interesting new items and healthy takes on old favorites like macaroni and cheese.

“We have a lot of mainstream items that kids recognize,” says Nicolini. Wandel quickly adds, “You have to do that to get them in the door. The menu can’t be all ‘what is this stuff?’”

Simmons is open for breakfast, lunch and dinner. Breakfast offers a variety of items, including an oatmeal of the day, such as apricot honey, cherry vanilla and cranberry orange. A five-grain oatmeal from Bob’s Red Mill is served every morning, and hot quinoa is available once a week, although Nicolini admits that students have not really taken to that grain.

Lunch and dinner offer four or five entrées, including a demo station, seven side dishes—three starches and four vegetables—and six soups or chilis. The demo station makes sandwiches to order at lunch and exhibition cooking at dinner with entrées like sweet and sour beef stir-fry, garlic roasted pork loin with red pepper coulis and Southwestern flank steak with black bean corn salsa. One entrée at each meal is vegan, and there is fish on the menu every Tuesday at dinner.

Side dishes include favorites like potato wedges, grilled vegetables and baby carrots with dill, alongside more exotic choices like barley pecan pilaf, lemon scented quinoa and jasmine rice with edamame.

The idea for Simmons came to Wandel two years ago, when she attended an exercise class at a fitness center “120 steps away” from Simmons. (There are six fitness centers on campus.)

“I went to the fitness center and they were turning people away,” she explained, noting that the facility can hold a maximum of 300 people. “I thought, ‘someone needs to capture them.’ At the same time, we had closed a dining hall and needed to find a niche for Simmons, something to make it special.”

Wandel settled on healthy dining for three reasons. First, the facility was small enough to get instant feedback from customers. Second, it was located near the Honors College, where, she noted, “the students are more mature and willing to try new things.” Third, Nicolini—Simmons’ chef—“has a passion for cooking. He’d be sold on cooking from scratch,” which Wandel believed was key to a healthy concept.

Nicolini says working on the recipes presented only a few challenges, but one of the biggest was coming up with a healthy mac and cheese dish.

“We found a recipe that we had done as a pace-changer last year,” he explains. “But in a larger batch we found that the spice profile had changed. So we had to start over.”

The other problem he and Kowalski encountered was that low-fat cheeses don’t melt well and stay creamy. So they experimented with cheeses until they found a formula that worked and turned to a béchamel sauce to help thicken the dish.

One of the surprise recipes, he adds, has been the house-made turkey burgers.

“We use Indian-influenced spices to give the burger a unique flavor profile,” he explains. “We’ve gotten a 50% acceptance factor and serve 240 portions per day.” 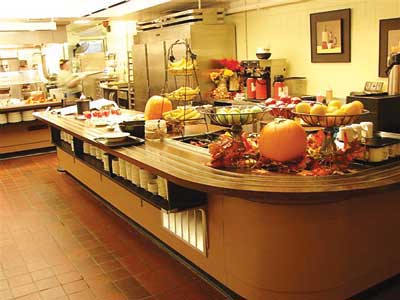 From a financial perspective, Wandel says she is relatively pleased with Simmons thus far. Food costs are a mere .2% higher than they were for Simmons before the changeover. Labor costs, of course, are higher because more foods are made from scratch. But even there, there is a trade-off. She says the cooks have greater job satisfaction because they feel their skills are more appreciated.

Wandel notes that getting students to eat more healthfully is only part of the battle to improve students’ overall health.

“There is an educational component to this,” she says, “not only about things like proper portion sizes but also what quinoa is and other healthful foods. And there is the physical aspect, the importance of exercise.”

So residential dining and the fitness centers have partnered to promote a complete health and wellness package. One aspect of the partnership is a T-shirt that students can earn. Students coming to Simmons or the fitness centers get a punch card. Once they collect six punches from Simmons and six from the fitness centers, they receive the T-shirt, which promotes both facilities.

Ironically, it is from the sports side that Wandel feels the biggest disappointment so far.

“We thought Simmons would be an easy fit for all the athletes,” she says. “Our sports nutritionists endorsed the menus, as did the coaches, but the students weren’t buying into the concept. Now, that’s starting to turn around. Our customer counts are slowly starting to increase.” Although Simmons is a one-of-a-kind facility on campus, Wandel acknowledges she wouldn’t mind extending some menu items to other dining halls. She particularly likes the flavor profile of the vegetable dishes Nicolini and Kowalski have created.

“What they do with vegetables I’d love to see across campus, but it does mean more labor,” she notes. “It would upscale students’ taste buds, though.”