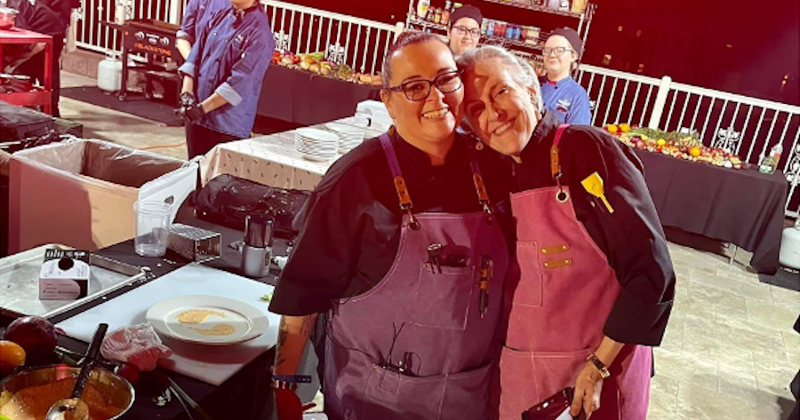 When Trula Hepner made the decision to enter the Lake Havasu Hospitality Association’s Top Chef competition, she had just two goals: “Don’t embarrass yourself and don’t get booted out in the first round,” she says.

It turns out that Hepner, director of food and nutrition at Havasu Regional Medical Center in Arizona, and chef Hayley Hill far surpassed those goals—they won the competition, beating out 20 local restaurants in the event, which was patterned after Food Network’s “Chopped.”

“Foodservice in hospitals is looked down upon as not very good,” says Hepner. “We were the only hospital competing, and entering the competition helped us get the word out that we cook beautiful food here that nourishes the body and soul.”

The team’s appetizer did more than get the word out—it earned their entry into the event. Hepner and Hill prepared 750 servings of mint-marinated watermelon topped with crispy pork belly glazed with a tangy, sticky sauce. They had given the recipe a test run with the kitchen team at the hospital, and tasters gave it a thumbs up.

Before they advanced into the first round, Hepner and Hill came up with a game plan. All the teams were allowed to go into community pantry and fridge and pick out produce, dairy products, spices and staples, so “we tried to think of ingredients that would go well with any protein we’d receive in the mystery box,” says Hepner. “When we got the box, we were ready.” 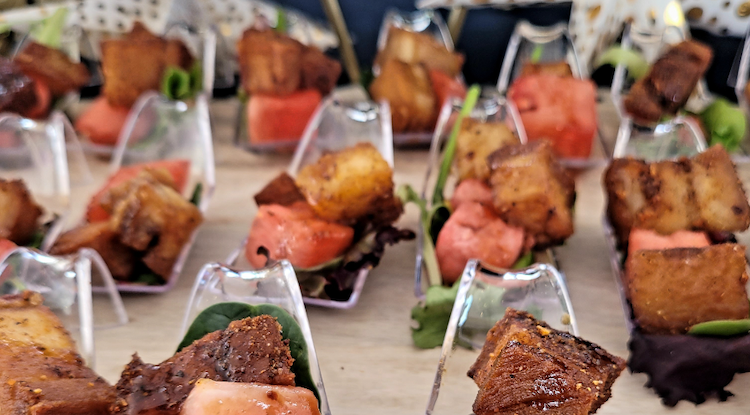 “We soaked the mushrooms and sea beans in hot water to leach out some of the salt,” she says. “Meanwhile, we sauteed the shrimp in butter, white wine and lemon, and cooked the bacon to add a crunchy element. Bacon makes everything better!”

The team also made an apple, celery and fennel salad dressed with olive oil and lemon. They piled the salad, shrimp, mushrooms, beans and cooked noodles in the middle of a plate and “made it look pretty,” says Hepner. “That ramen salad got us to the next and final round.” 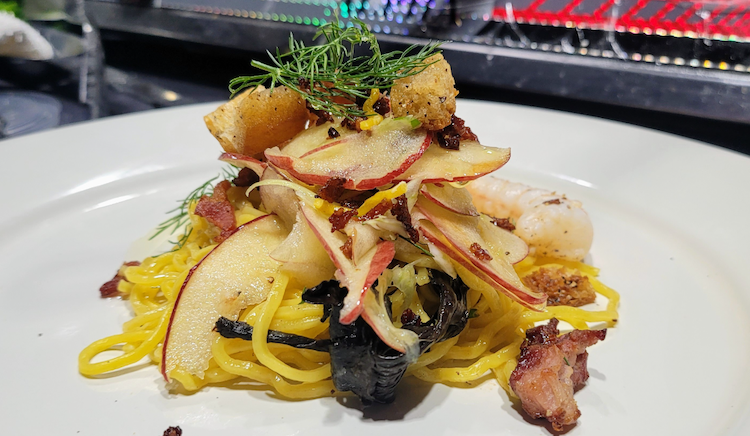 Going into the second round, Hepner and Hill “got the lay of the land” and felt more relaxed and had more fun, she says. This time, the mystery box contained sweet potatoes, canned chipotles in adobo, cream cheese and a hanging beef tender.

“We made a dry rub for the beef with ancho chile, citrus, smoked paprika, onion and garlic powders, and salt and pepper,” Hepner explains. After searing it on the grill, the duo sliced the meat thin on the bias and set it aside.

To tackle the sweet potatoes, they sliced them on a mandoline, formed the slices into a circle and fried them on the flat top as the base for a potatoes Anna-style side. Then they blended the cream cheese with heavy cream and orange juice for a quick cream sauce. The final component was a ragout cooked down with caramelized Vidalia onions, scallions and shallots, porcini mushrooms and heirloom tomato concasse.

Before plating, Hepner and Hill finished off the seared steak slices on the flat tops, deglazing the meat with tequila and lime. Then they sauced the plate, added the sweet potatoes on top and the steak to the side, spooning the ragout over the beef.

The Lake Havasu Hospitality Association ran the competition to raise scholarship money for high school students who want to pursue culinary careers. During the competition, two of these students were assigned to each culinary team as “runners” to grab ingredients, knives and other essentials.

HHS, Havasu Regional Medical Center’s foodservice management company, encourages staff to get involved in their communities, and Hepner is always gung-ho. She’s participated in cancer walks and other fundraisers, but this culinary competition really showcased her talents of her team, which will proudly serve the two prizewinning recipes at an upcoming Board of Trustees dinner.

“We were asked to replicate the two winning dishes for the event,” Hepner says.