It might be time for tuna salad to take a hike. The Food Channel named global flavors as a Top 3 sandwich-and-salad trend of 2015, while a 2014 report by Chicago research firm Datassential found that 41 percent of diners are interested in trying ethnic sandwiches. 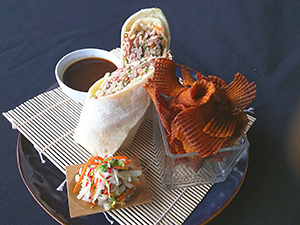 “I think what students are looking for is something different. They don’t want a ham sandwich anymore,” says Gary Coltek, executive director of culinary and hospitality services and chef de cuisine at Kennesaw State University in Kennesaw, Ga. He’s using global ingredients throughout the menu for the 11,000 students he serves daily and says sandwiches and wraps comprise about 10 percent of their choices.

Below, Coltek and other operators share their take on international offerings between bread that are landing on their menus.

Traditionally, Korean bibimbap isn’t a sandwich—it’s a rice bowl, topped with meat, vegetables, an egg and gochujang, a spicy chili-pepper paste. Coltek’s version turns inspiration from those flavors into a play on French dip. He fills the roti bread with marinated beef, sticky rice, herbs and vegetables, and serves it with a housemade dipping sauce and cabbage quick pickle.“ After eating a simple banh mi sandwich, now [students will] try almost anything,” he says.

Pita Tuesday is a diner favorite at UCLA’s Dining and Catering Services. Jorge Noriega, the university’s research and development chef, sees it as an opportunity to give students flavors from parts of the globe they may not have heard of. One such option, a Ceuta-style braised pork with grapes, served in a pita, finds its origins in the Spanish city in northern Africa.

“We are trying to expand on that kind of inspiration,” says Noriega, who estimates he serves between 1,600 and 2,500 students daily at each of his cafeterias during the school year. When UCLA began expanding its international offerings last quarter, he says students didn’t know exactly what to make of it, but sales have steadily increased.

When designing dishes for 12,000 students from all over the world, Campus Executive Chef for Bon Appétit Patrick McElroy also is keeping local tastes in mind. However, St. Louis has the fifth-largest Indian population in the U.S., he says, leading him to a spin on chicken tikka masala.

“[We’re trying] stuff that’s a little off the edge there that changes and spices it up a little,” he says. The tacos (not quite a sandwich, but they afford the same portability) pair a masala from Campus Curry Chef Sona Kukal with a pineapple-coriander salsa and pickled onions with ginger and turmeric.

“There’s definitely an element of surprise when you have the ability to be very flexible,” McElroy says.

Using a traditional bread for this Cuban favorite doesn’t stop Noriega from experimenting with toppings. A lamb version features either harissa-braised meat or lamb mechoui served with housemade hummus and a chermoula-carrot salad. In a more traditional vein, pieces of pork are caramelized and tossed in a pomegranate molasses.

Chermoula: A North African marinade featuring a mixture of herbs, oil and lemon juice, among other flavors.

Mechoui: A whole sheep or lamb spit-roasted on a barbecue, traditionally served in northern Africa.