A“food superstore” similar to New York City’s over-the-top Eataly is scheduled to open at the University of Massachusetts in Amherst, Mass., says Ken Toong executive director at UMass Auxiliary Enterprises. Toong envisions the epicurean emporium, which he hopes will be open by Christmas, to offer prepared foods along with multiple exhibitions occurring at once. He plans to have butchers cutting and grinding meat to order, noodle makers pulling pasta and bread bakers shaping loaves of dough that will fill the air with the scent of yeast. 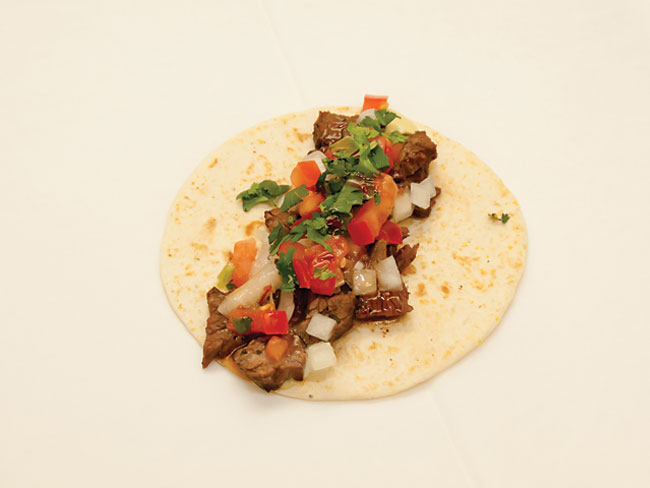 One of the elements of the new location will be to-go service, something that UMass and other institutions are embracing wholeheartedly. Toong says he expects that half of the food sold at the superstore will be consumed the off premises.

Among UMass’ current best-selling to-go prepared dishes is sushi, which Toong reports is rolled every two hours during meal periods. It’s so fresh, he says, the sushi is sometimes served while the rice is still warm.

“Food trucks are the next mega trend,” wrote Toong on his blog. “The secret of success is serving simple, great food and providing exemplary customer service.”

The new trucks, which are expected to debut in September, will each specialize in different foods. One will highlight Asian fare and the other grilled cheese, he says.

Food trucks also work because they are “portable and convenient to customers,” Toong explains. UMass’ truck generates between $2,500 and $5,000 a day. “And we want to make sure it is healthy and that the [items] are quick to grab and go.” He noted in his top 10 trends, based on a survey of 600 respondents form the school’s 16,075 students, that his customers eat later than ever these days, and they are looking for fast options that fit into their busy schedules.

“We notice that students use late-night meals as a way to treat themselves,
to meet their friends and to build community,” Toong says. “At UMass, 30% of students dine from 9:30 p.m. to the wee hours of the morning.”

“March is national nutrition month,” she says, so she’s highlighting her annual “the-dietitians-are-taking-over-the-cafeteria” menus. One of the dietitian’s best-sellers last year was salmon salad with herbs and citrus, so she plans to bring it back this year. The fish was prepared with orange, lemon juice, dill and parsley and was served cold over a bed of lettuce with steamed asparagus, black olives, tomatoes and Italian dressing.

This year, poached salmon will be served over mixed greens with julienne vegetables, grapefruit and orange segments. Raspberry vinaigrette dressing will finish the dish.

A marketing tool: Mary Majorack, who manages the foodservice program for Flik Independent Schools at Bishop O’Connell High School, in Arlington, Va., substantially increased sales when she started packing to-go meals that were distributed after open houses for prospective students and their families. One of her favorite chef’s offerings was grilled chicken salad with apple, pecans and vinaigrette dressing. She packed two portions per bag for the promotion she calls, “Dinner for Two.”

“It showed the [prospective families] what kind of food we do,” Majorack says. “I almost tripled our sales of salads and sandwiches” since offering the goodie bags. Currently of the school’s 1,200 students, she serves about 1,000 each day.

“We can package anything to go,” she adds, so she also proposed goodie bags with full meals for prospective donors brought in for sales and marketing meetings. One example of the to-go dinners would be turkey scaloppini with roasted potatoes, a vegetable and a salsa made with olives, roasted tomatoes, black olives, lemon juice, garlic and cilantro.

Just What the Doctor Ordered

Jean Revard, multi-facility foodservice director with Abrazo Health Care, in Phoenix, has been floored by the success of a to-go program she and her team started about a year and a half ago. Even more amazing is the fact that the program, which is available now at four of the company’s six hospitals in the Phoenix area, was developed almost by accident.

The program grew out of healthful cooking classes Abrazo offered for patients with diabetes and cardiovascular disease, according to Lisa Levi Schmidtke, regional marketing and public relations director with Abrazo. The classes “went really, well but [the attendees] said, ‘We don’t really want to learn how to cook. We want you to cook for us,’” Schmidtke says.

So the hospital began offering the healthful dishes for area residents to pick up in to-go packaging at one hospital, for $6 a meal. But the 500-or-less-calorie meals became so popular—especially after an area newspaper wrote about them—Revard and her team needed a bigger area to prep meals and more storage space.

They got what they needed and more. Last fall the department received a truck to deliver meals to participating hospitals, an area private retirement facility and Abrazo’s corporate headquarters for the 300 staffers who work at that office. Along with transportation Revard received marketing funds to promote the program and a separate staff to prepare the takeout dishes. A cold-room prep area for assembling the meals is expected to open this winter.

“After all the years that I’ve been in healthcare foodservice, I was like ‘Wow,’” Revard says. Her bosses told her, “We want this program to grow” in order to promote good health.

Many people—especially the elderly, who are often on a fixed income—have taken to the program. Starting at about 50 meals a week, Revard’s department now serves approximately 50 meals a day. Pricing for the meals has remained consistent, but more entrées have been added.

Beef pot roast remains the most popular dish. But now the 11 choices include turkey meatballs with marinara sauce and whole-wheat spaghetti.

Also new, and a top seller, is seared salmon with fresh spinach walnut salad, dried cranberries, slivered red onions and raspberry dressing. While each takeout meal includes a vegetable, strawberries were picked to go with the cold salmon.

“It was out biggest seller in the summer, so our goal is to create more salads before next summer,” she adds. “We had a lot of requests for salads.”

Revard says her customers often tell her that they feel best leaving the cooking of the healthful options in the hands of professionals who understand dietary needs. The takeout meals are all prepared and served fresh without preservatives. They are dated and labeled with suggested consumption dates of about five days later. The labels also describe heating and serving instructions.

Average orders are for about seven meals at a time. And the most typical customer is about 60 to 70 years of age, she says.

Executive chef Amedeo Citro, who works for Eurest Dining at Johnson & Johnson in Radnor, Pa., won the California Avocado Commission’s recent recipe contest with a grilled steak, avocado and gorgonzola sandwich that includes avocado in two forms—sliced and mashed with the cheese.

Citro says he prefers having the sandwiches prepared to order, but he also places some in grab-and-go refrigerators to help shorten lines and provide a fast option for diners on the go. His trick to keep the avocado looking green is to estimate the right amount that will sell out quickly.

“Originally I made [the sandwich] at a family barbecue. I had limes and avocados in the refrigerator, and everyone really liked it. Then I noticed that there was an avocado recipe contest, [put on by the California Avocado Commission] so I threw it together and took pictures of it. It was one of the first-place winners.

People really like it. At the chef’s table we build the sandwich in front of people. We have everything ready. The onions are marked off. We toss the avocado slices with lime and lemon. I like them both together. It will slow that [oxidation] process down a little. We know the amount that we usually serve.

Wasabi steak taco marries the best of Latino and Asian flavors in a handheld item. 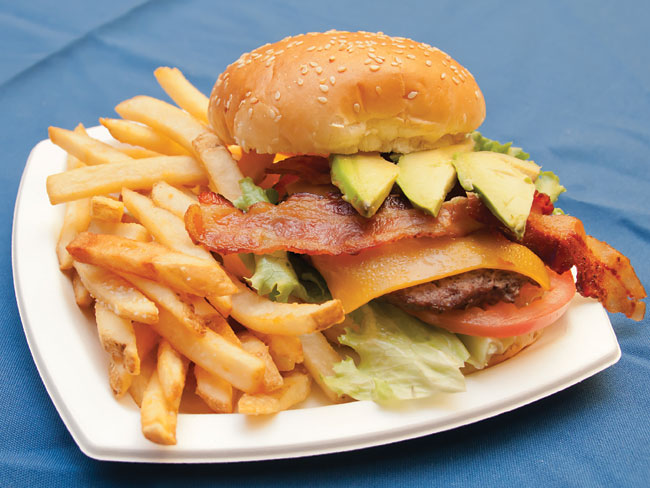 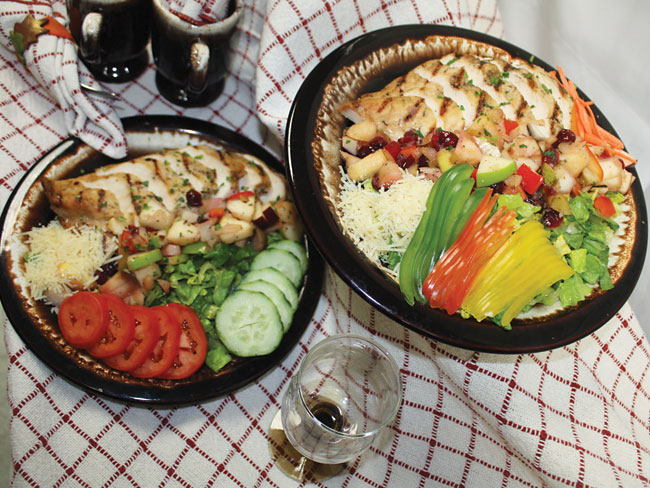 The signature burger from the BabyBerk food truck at UMass.

A sample of Flik’s Dinner for Two.