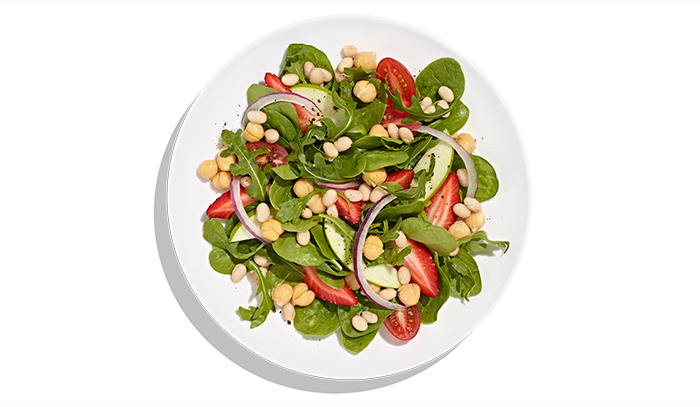 In early 2017, Metz Culinary Management—which works with foodservice operators in K-12, C&U, B&I and healthcare nationwide—rolled out a company-wide mandate that none of its accounts were to use chicken raised with antibiotics. “I’ve found that the antibiotic-free chicken tastes better. It tastes like true chicken—a little more gamey,” says Ryan McNulty, Metz’s director of culinary development. But the antibiotic-free label is also a marketing tool. “It shows we’re listening to what people are saying,” he adds.

Antibiotic-free claims speak to consumers’ demands for both taste and health, according to Technomic’s most recent Healthy Eating Consumer Trend Report. Nearly seven in 10 consumers say that antibiotic-free ingredients are healthier than food treated with antibiotics, and a third of consumers say they’re tastier (compared to 7% who find it less flavorful).

Food and beverage descriptors that fall in this sweet spot between a high health and taste perception are the ones diners are most likely to choose. But how are FSDs balancing consumer perceptions with their own knowledge to build dishes that resonate with guests? FoodService Director talked to operators to break down the buy-in behind three phrases diners are likely to recognize.

The terms antibiotic- and hormone-free, fresh, local, real, clean, natural, organic, high in protein and “a full serving of vegetables” are all considered by consumers to indicate both healthy food and good-tasting food, shows Technomic data. More than two-thirds of consumers say these buzzwords would make them more likely to purchase a food or beverage item, according to the report. 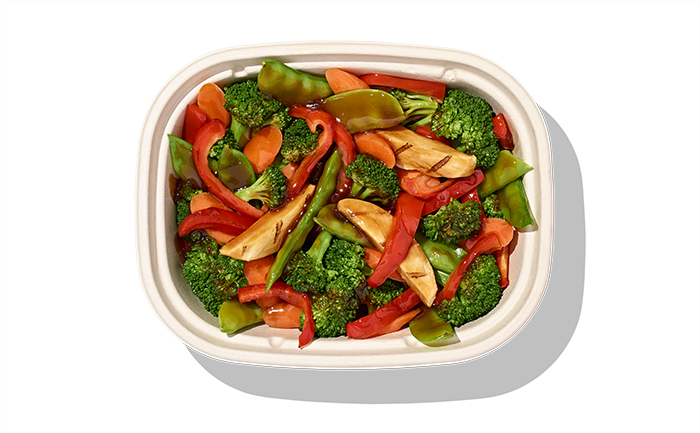 McNulty admits that the transition to antibiotic-free chicken at Dallas, Pa.-based Metz wasn’t easy due to its cost. “It’s much more expensive per pound. It forces our chefs to rethink menus and be more creative,” he says. One way they’re balancing the budget: supplementing recipes with more plant-based proteins and using smaller amounts of chicken. McNulty says Metz is exploring the idea of antibiotic-free ground beef for its burgers next, but doesn’t have a set timeline.

All chicken served at the University of Massachusetts at Amherst was converted to antibiotic-free in the fall of 2015 in response to diner demand, says Garett DiStefano, director of residential dining. “Our surveys fielded to students showed that they thought the antibiotic-free chicken tasted better,” he says, adding that budget adjustments also were necessary to make the change. “When we buy whole chickens, we try to utilize the entire piece of meat, including the carcass for soup stock. We also focus heavily on kitchen effectiveness and waste reduction to reduce costs.”

DiStefano says UMass wouldn’t shy away from trying out more antibiotic-free proteins, but the problem is supply. “When we’re serving six million meals a year, to find vendors that can meet that kind of demand is a challenge,” he says.

A new retail-foodservice hybrid concept called UMass Fresh will serve as a testing ground on a smaller scale for antibiotic-free proteins beyond chicken. Offerings are prepared fresh using hyperlocal, organic ingredients, then chilled for takeout and sold to the customer with reheating instructions. The concept is meant to appeal to graduates familiar with UMass Dining’s offerings, says DiStefano.

But Alicia Koloski, dietitian at Parkhurst Dining Services in Pittsburgh, which works with college and B&I operators, says the antibiotic-free label doesn’t resonate with her customers. “I think people are starting to understand that labels have loopholes and they don’t trust them—including antibiotic-free,” she says. 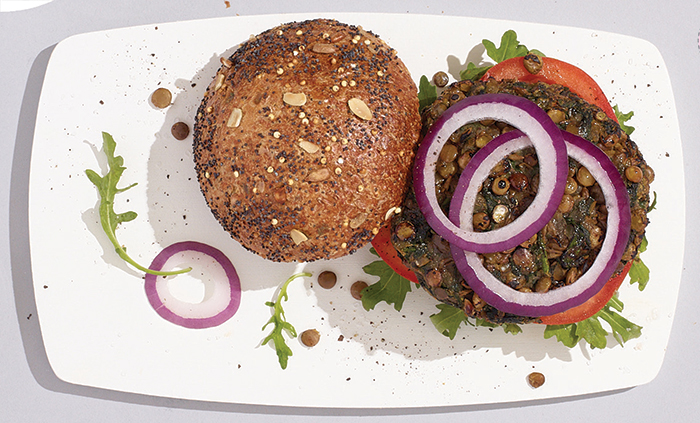 What about claims that are missing part of the sweet-spot equation? Diners are not as likely to order foods they perceive as healthy but lacking in taste, according to Technomic’s Healthy Eating Consumer Trend Report. Two such claims are vegan and vegetarian.

However, operators who spoke to FoodService Director agree that plant-based diets are good for the body, the environment and the budget. Foodservice directors and dietitians also say that plants help meet the high consumer demand for protein, which diners may not realize, says McNulty.

“People see protein as a buzzword and a health word. But the body can only absorb only so much protein at any given time, and too much protein can be a bad thing,” he says. “We try to take a healthier approach to food so we don’t overload with animal protein, even if it is lean.”

Koloski advocates pulses like beans, lentils and chickpeas as her protein of choice at Parkhurst. “Most of the pulses we use are grown in America or Canada, so they can be spun as local to an extent,” she says. “They are cheap, sustainable and really good for us. They count as a vegetable, and they’re a good source of protein.”

Diner perception of vegetarian and vegan dishes is all about marketing, Koloski says. “I once heard a director of a hospital say that when the hospital added a ‘wise picks’ label to its tilapia dish, sales declined significantly,” she says. “I think when you start labeling stuff as ‘healthy’ or ‘wise choice,’ you see a negative impact, unlike the positive response around organic, fresh or ‘real’ labels. And don’t use the ‘V’ words—vegan or vegetarian.”

Lisa Gibson, director of culinary services at Sanford Medical Center in Fargo, N.D., concurs. “Our Meatless Monday program was not well-received because people had the perception that we were taking something away from them,” she says. “You have to be careful with labeling. Vegan and vegetarian have gotten a bad name, and the trend now is to describe items as ‘plant-based’ instead.” 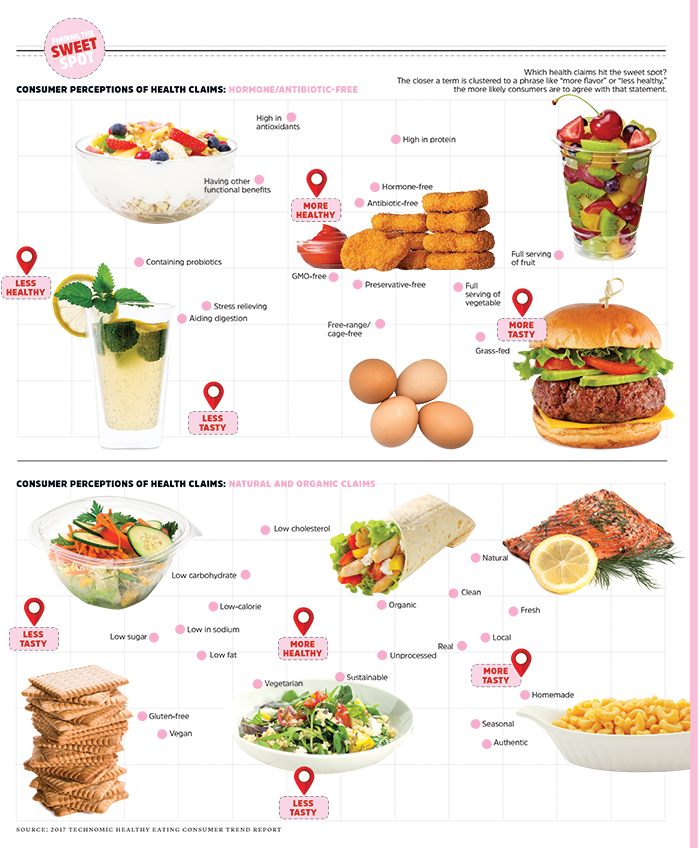 The closer a term is clustered to a phrase like “more flavor” or “less healthy,” the more likely consumers are to agree with that statement. 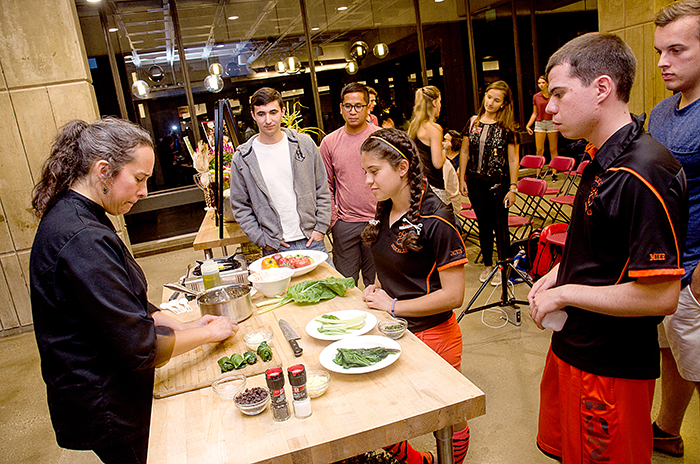 With this much talk about plants, local and organic assertions are bound to come up in the conversation. These are also two claims that hit the sweet spot in the Technomic report. “Moving to a plant-centric diet can help with costs—but if you’re moving into the organic plant space, not so much,” says Koloski.

McNulty says that Metz’s local supply depends on the season; for about five months of the year, around 40% of the food at accounts above the Mason-Dixon Line are locally sourced. Organic offerings, meanwhile, are purely based on how much accounts are willing to spend. “Private schools and the private higher education sector are very interested in sustainability and organic and local claims,” he says. “You’re not going to see it as much in a lot of our business and industry accounts. Healthcare wants to move more into organic, but they often don’t have the budget for it.”

One hospital with the budget—UCLA Health in Los Angeles—sources about 65% local and organic produce, says Patti Oliver, director of nutrition. “The local products are sourced within 250 miles, and we have a map in our cafeteria that shows where our food comes from,” she says.

Oliver says UCLA Health is fortunate to have funding support from hospital administration for local, organic and antibiotic-free programs, adding that administrators prioritize these labels for health and sustainability reasons. “We also look at how we can save [money] elsewhere, such as by acquiring different items under a less expensive brand,” she adds.

Take it to the kitchen