“As a chef, I pretty much have grown up through the business thinking that fresh was always better—produce, fish and meats, especially,” says Ryan Conklin, executive chef for UNC Rex Healthcare’s culinary and nutrition services. “But the more ‘re-educated’ I get, the more I’m learning that some frozen options may be more appropriate for me to be using on my menus.” 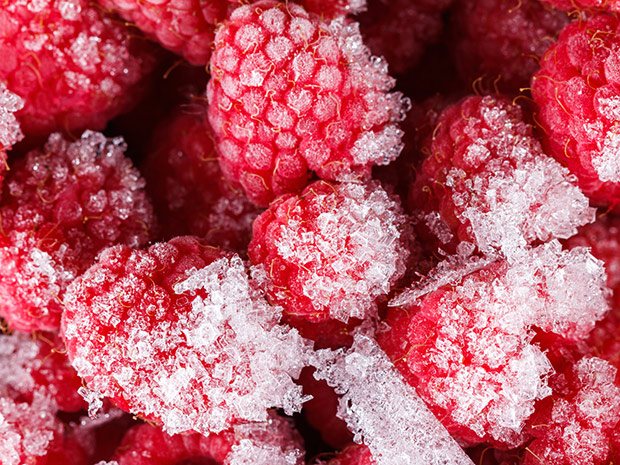 Right now, the perception of frozen foods doesn’t match the reality, especially for high-volume foodservice operators, says Conklin. Often, chefs and operators picture not-great product that’s been sitting in a block of ice for some time, or foods that have gone through a processing plant overseas. But now, with some new technologies in place across the country, that’s not the case. Deanne Brandstetter, VP of nutrition and wellness for Compass Group North America, agrees. “I was quite impressed with the processes [for frozen] and the entire story—I think that is what has been lacking,” she says.

That story is this: Many farms have procedures and processes to take freshly picked produce and pack them as IQF within a few hours of being harvested, either on-site or nearby. It’s something Conklin saw firsthand on a trip to Washington state to check out raspberry processing. “I recall discussing with other chefs that these frozen raspberries are actually more fresh than ones I purchase fresh back in North Carolina. They were picked at their peak of freshness and frozen right away to preserve as many nutrients as possible,” he says. “I was so impressed that I’m already looking at ways to use more of these on my menus.” Since then, he’s done more research and learned that this same process of turning fresh produce quickly to IQF is being used with many fruits and veggies, especially those that have short harvesting seasons.

That adds to another benefit of frozen, says Brandstetter, who is a registered dietician: health. Depending on how produce is handled, a frozen option can be equal to its fresh counterpart, if not more nutritious, she says. In the past, some produce has been shipped from the U.S. to a processor in Southeast Asia, before being shipped back frozen, leading to questions about food handling, water quality and more. “Where processing is done adjacent to the field, that risk is eliminated,” she says.

But chefs aren’t ready to swap frozen for fresh all the time. The one place where there is a clear difference, says Brandstetter, is the texture. “But there are so many uses where we really don’t need to use fresh, especially when frozen flavor is better,” she says. For Conklin, those applications include sauces, purees, smoothies and various other condiments. “Frozen has really started to make more sense to me now,” he says. But when it comes to salads or center-of-the-plate options, he’s still going to lean on fresh. There’s a caveat though—not only is he searching for fresh produce to be as local as possible, it’s key that the produce is ripe.

The takeaway: “In certain applications, I feel that frozen is actually better than fresh, specifically when you are buying something out of season,” says Conklin. In fact, for off-season produce, he plans to lean more towards frozen, “Because I know that those were harvested and processed at the peak, and I feel I should be passing down that quality to my customers.”

How a chef engages customers with unique at-home dining experiences

5 stealable ideas that sprang up during the pandemic