Listed as a top-20 food trend in the National Restaurant Association’s annual What’s Hot 2016 Culinary Forecast, global breakfast items are on fire. In fact, in the breakdown by category, ethnic-inspired breakfast items beat out the competition for the No. 1 slot. 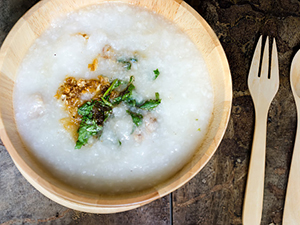 It’s no surprise, then, that ethnic-inspired breakfast foods are a hit with the college and university crowd. These students are savvy customers; they seek fresh, authentic and natural food that’s healthy and tastes good—and they have sophisticated palates. “We’re serving experienced students who are more diverse,” says Ken Toong, executive director of auxiliary services for the University of Massachusetts dining services.

With one of the nation’s largest university foodservice programs, UMass serves close to six million meals per year. Even though breakfast tends to be the slowest segment compared to lunch and dinner, Toong says he serves as many as 2,500 breakfasts daily. “Most students would rather sleep until class or an exam, even though they know breakfast is important,” he adds.

With that in mind, Toong makes sure to offer exciting, tasty dishes that can be eaten quickly or taken to go. “Convenience is very important to them,” says Toong.

A nearby spice table, well stocked with Sriracha, salsa and a variety of seasonings, provide students the opportunity to further customize any breakfast, adding more kick and flavor.

Also at UMass, the Asian-influenced congee bar is a favorite among students. Toong offers two types of congee—a rice soup, similar in consistency to oatmeal—plain and chicken. Students can choose from a variety of toppings such as green onions, dried shrimp, fresh, fresh Chinese doughnuts and even eggs and bacon. For the Asian students who make up 15 percent of the student body, it’s a little taste of home. But the general population also enjoys the belly-warming, filling dish.

And since it’s a one-bowl meal, students can grab and go when they’re stressed for time, says Toong.

Toong isn’t surprised by students’ cravings for international breakfast foods; a willingness to try new flavors complements their desire for whole food offered in a variety of ways, made with fresh, unique ingredients.