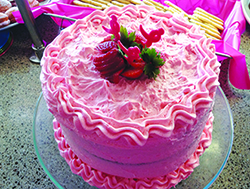 Cater to your audience, suggests Paul Oesterle, catering chef for the University of Georgia, in Athens. The university’s colors are red, black and white, so Oesterle developed a two-tier Red & Black cake, where cream cheese frosting is sandwiched between a layer of dark chocolate and a layer of red velvet. The cake is topped with chocolate ganache and a white chocolate candy arch, which represents the university’s tradition-laden symbol—it’s considered unlucky to walk under the campus arch before graduation. “It’s a pretty stark presentation of the school colors,” he says.

To up the ante on traditional fillings, opt for specialty ingredients. For example, Oesterle blends one part Dutch process cocoa with three parts regular cocoa powder in his chocolate cake, resulting in a darker color and richer flavor. Similarly, Michael Atanasio, director of food & nutrition service at Overlook Medical Center, in Summit, N.J., has created blueberry and chocolate raspberry cakes using quinoa. “Like most grains, quinoa absorbs moisture, so it marries nicely with sweet or savory items, while adding texture, nutrients and a novelty effect,” he says.

Noreen Fagan, baker for Washington College Dining Services, in Chestertown, Md., suggests taking pantry items you already have and using them creatively. Fagan created a best-seller called Hawaiian Surprise by combining yellow cake mix with pineapple juice. The cake is then topped with a frosting made of cream cheese, instant vanilla pudding and crushed pineapples, all garnished with toasted shredded coconut. “Our guests eat in the same location day in and day out, so we are always trying to spice up our offerings. These cakes are even more popular than traditional cakes,” Fagan says.

Don’t be afraid to add some spice. “We do many traditional fillings and frostings but in a very different way, like adding curry, allspice and clove to sweet frostings,” Atanasio says. “When done properly, one cannot distinguish one herb or spice; they marry together [and make things interesting].”