When planning menus, make room for dark meat chicken, says Kathy Hayden, foodservice analyst at Mintel Menu Insights in Chicago. “I can easily see chicken drumsticks [being] as big as wings,” Hayden says. “Chicken wings used to be a throwaway.” 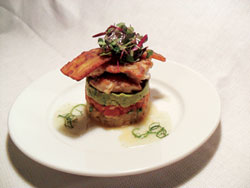 Hayden says the price for chicken, as well as other animals fed primarily with corn, will increase because much of the corn crop was affected by this summer’s drought. Because of this, new uses of the whole bird may become more important, she predicts, adding that many high-end restaurant chefs are now favoring dark meat chicken.

Non-commercial operators also are going to the “dark side” of chicken. Three years ago chefs at Purdue University in West Lafayette, Ind., replaced white meat chicken with leg and thigh meat in their noodle bowls. Students didn’t complain about the switch, says Kathleen Manwaring, associate director of dining services, adding that she’s not even sure they were aware of the change. Manwaring says the move was done in part to save on food costs.

“Dark meat has a deeper flavor in general but also picks up other flavors much better than white meat,” says Allie Clemons, chef at Purdue’s Ford Dining Court. “Dark meat is more tender since it has a higher fat content, so it is harder to overcook than white meat and easier to do in large volume. It seems to be used more in Indian cooking than white meat.”

For example, Clemons uses thighs in an Indian butter chicken dish that’s spiced with cardamom, cloves, cinnamon and ginger. Thigh meat is also an ingredient in Purdue’s Thai red curry, while drumsticks are featured in a Brazilian skewered churrasco and a house-smoked barbecued chicken dish.

For the barbecue dish, the team uses a ratio of 3-to-1 dark to white meat chicken, which is hot smoked at 325°F for two and a half hours. The chicken is pulled and offered with various hot and barbecue sauces.

Manwaring notes that despite the increased use of dark meat, the majority of chicken served still is breast meat. The university  purchases 387,800 pounds of chicken breasts annually, compared to 34,800 pounds of thigh and leg meat.

“Predictable” protein: “White meat is predictable. It’s what people see on menus at chain restaurants,” says Jessica Marchand, R.D., director of food and nutrition services at WakeMed Health & Hospitals in Raleigh, N.C. “I think some [customers] are afraid of dark meat chicken. It is underutilized.” Marchand, however, is hoping to expand her kitchen’s use of dark meat chicken.

Jennifer Leamons, WakeMed’s chef,  already has a recipe for a restaurant-style chicken thigh dish for catering and meals for board members. The dish layers yuca and crab sauté with diced tomatoes, avocados and chicken thighs served in a tower with mojito sauce. The dish, which was entered in the Association for Healthcare Foodservice’s culinary competition in 2012, is finished with plantain crisps and microgreens.

To boost flavor while keeping calories in line, Leamons combined both skinless and skin-on chicken thighs in the dish. Chicken without skin is leaner than most people think, says Marchand.

Dark meat is also easier to pound thin, she adds. The culinary team features thighs in fast-cooked items such as Indian curries, Asian stir-fries and chicken strips, which are breaded with Japanese-style panko or whole-wheat breadcrumbs and herbs before baking.

“I think dark meat is preferred only because it is more moist,” Chong says. “Typically kids gravitate toward the dark meat.”

The district’s dark meat recipes include a Jamaican-style chicken, which is paired with rice and beans, and a roasted chicken Montego Bay-style dish, served with a sauce that Chong describes as “an orange-pineapple sauce with a little kick to it.”
Chong says that because most of the dark meat chicken pieces she purchases look the same, altering sides and flavors is important to keep students interested.

“If it looks the same, kids are going to think that it is the same,” Chong says. “If the appearance is different, so is the perception.”

To provide variety, Chong offered a teriyaki chicken thigh meat dish that was stir-fried on a flat-top grill located in a food truck. The chicken was served over noodles with vegetables prepared lo mein style. For a Louisiana take on dark meat pre-cooked chicken, Chong serves the concoction over brown rice.

“The nanwich is a sandwich that is served on naan bread and pressed in a panini press,” Fischbach says. “It’s like a cross between eating a sandwich and a wrap rolled in lavosh bread or a thick pocketless pita instead of a tortilla.”

“I leave the skin on and bone in because the skin gets nice and crispy and both the skin and bone add flavor,” Fischbach says. “Plus, they allow the dish to keep and express its rustic roots.”