The conventional wisdom that chicken is boring doesn’t hold much weight with most non-commercial chefs, especially when you consider all the creative ways these operators use the ubiquitous bird on their internationally influenced menus. 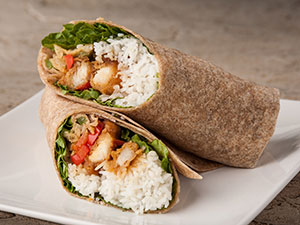 “Chicken is the potato of the meat world,” says Mark Moritz, senior executive chef at Turner Place at Virginia Tech University. “It takes on flavor really well, so it’s really easy to combine it with different [world flavors]. Plus, it’s very economical.”

Moritz says his team has been able to take full advantage of Turner Place’s rotisserie to create global flavors with chicken.

“We do a shawarma where we toast off cardamom and coriander seed and mix them with lime juice and yogurt,” Moritz says. “We smother that over the chicken and put it on our rotisserie. We serve that as half chickens and the students have a choice of sides. We also do a Pang Pang chicken salad, which features ramen noodles. It’s basically a chicken breast that we poach in a liquid of soy sauce and mirin, and then we shred it into strips. Once we shred it, we season it with scallions, cucumber and red peppers, and [add] a sesame dressing. Overall, I’d say we try to use thighs more than anything else because it’s almost impossible to dry out a chicken thigh, whereas the chicken breast can get dry really quickly.”

“For the bowl, we start out with a chicken consommé and we add in some light brown sugar, rice wine vinegar, soy sauce, ginger puree, chopped garlic and crushed red pepper,” he expains. “We simmer that for 30 or 40 minutes, and then it goes to the [station] where it’s held at 190°F. When a customer orders the dish, we place rice noodles in the bowl and add the sliced cooked chicken on top of the rice noodles. Customers have their choice of toppings, such as lime wedges, Thai basil, fresh cilantro and mushrooms. Then we ladle the hot chicken broth over the top.”

At the West End Market dining hall, Executive Chef Mark Bratton and his team focus on more fusion-type dishes such as chicken tenders in a housemade teriyaki. For the sauce, the chefs combine fresh pineapple juice, soy sauce, sriracha, chili-garlic sambal, ginger, sugar and a little mirin, garlic and toasted sesame seeds. The sauce and the fried chicken tenders go in a tortilla with grilled peppers, onions and crispy wontons. Bratton says they simply call it “an Asian wrap,” and sell about 250 a day.

Infusing chicken with international flavor can get a little trickier for school districts when all the strict requirements and commodity products are taken into account. But the real challenge, says Dawn Houser, director of nutrition services at Collier County (Fla.) Public Schools, is trying to satisfy the wide variety of students’ tastes, which she says vary from school to school.

One of the district’s most popular dishes is its tangerine chicken, which Houser says is made with a premade, good quality Asian sauce that’s a little sweet and not too spicy. The sauce is added to popcorn chicken that the department serves over brown rice. The department also uses a lot of chicken meatballs in both calzones and a Mongolian meatball bowl, which uses the hot honey sauce and is served over brown rice.

“We also do a Pan Asian chicken and vegetable rice bowl, which we developed with a local chef,” Houser says. “The dish uses our commodity chicken fajita meat and a ‘honey fire’ sauce (soy sauce, honey, garlic and ginger) that we mix with cauliflower, broccoli and carrots. We serve brown rice, top that with the vegetables and then finish it off with the chicken and the sauce.”

At Knox County (Tenn.) Schools, Wanda McCown, senior field manager, says they have a Korean chicken dish on the menu this year that is a mix of light- and dark-meat chicken and features a sauce made with ginger, sesame oil, soy sauce, honey and garlic. The dish is served with either potatoes or rice.

“The chicken is precooked and we just heat it up,” McCown says. “The middle and high school students like that more than the elementary students. Nationalities in our schools are so diverse, and now you have so many restaurants offering these types of dishes, that the students want to have these things at school.”

Gregory Gates, regional executive chef at two Kaiser Permanente locations in Oregon, says it’s easy to find a place for chicken in virtually every global cuisine because its neutral flavor makes it a natural accompaniment. In his hospitals, Gates says they make a wide variety of international chicken dishes such as a chicken and kimchi fried rice, which uses brown rice mixed with onions, garlic, peas and carrots. In a hot pan, chefs sauté the chicken and rice mix along with some bell peppers, kimchi and spinach. Then they add a cup of the rice and sauté that until it’s heated through. A sauce of soy, hoisin, pineapple and cilantro finishes the dish..

The hospitals’ popular bowl concept, which started out as a vegetarian option, has now integrated chicken because department got so many requests to add the protein. One popular option is the Kaleidoscope Bowl, which features tri-color quinoa, purple potatoes, pinto beans and edamame, roasted carrots with the stems, Brussels sprouts, rainbow chard and housemade pickled onion. Customers have the option to add housemade sauces such as a blood orange yogurt sriracha sauce or a roasted garlic basil pesto.