Want to make your dining operation a magnet for customers? Fire up the ovens with trays of treats, and the allure of fresh-baked goodies will be tough to resist. A robust baking program can certainly be a differentiator, but in some kitchens, short-staffed kitchens and limited budgets present challenges. These operators have found solutions, using baked goods to tempt diners throughout the day.

Jeffrey Quasha, corporate executive chef for Morrison Healthcare, oversees 850 cafeteria and retail operations, each with a clientele that is constantly looking for something different, he says. To meet this demand, he designed pop-up stations that change on a regular basis. The latest? A pizza station featuring quick-fired personalized pies.

To expedite the pizza prep, Quasha sources 21-ounce readymade dough balls, which staff at each hospital cafe flatten and stretch into the proper shape. On offer are thin-crust, Neapolitan-style pies at the Stretched pop-up and Detroit-style pizza at the Iron City Pizza pop-up, with rotating toppings including shakshuka. 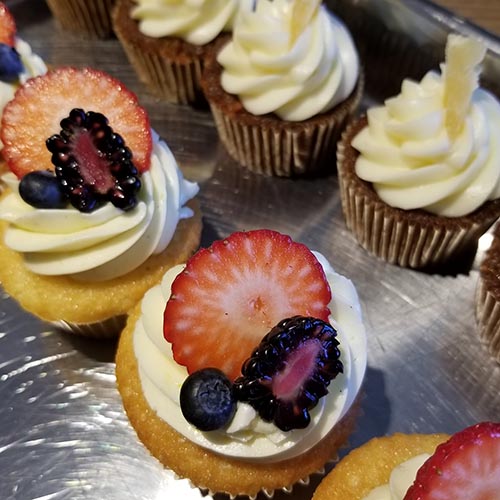 While cooking from scratch is a priority at Morrison locations, using frozen dough promotes speed and consistency, Quasha says: “It also allows us to take extra steps with the toppings and fillings, to roast mushrooms or make a ricotta spread from scratch.”

At Columbia College in Columbia, Mo., pastry chef Erica Hartzell supplies baked goods to the Cougar Cafe, a retail outlet, and the school’s dining halls, which are managed by Aladdin. On a daily basis, she and her part-time prep cook bake 700 cookies, several cakes and 15 dozen bars, among other bakery items.

Hartzell uses frozen dough as a base for everyday cookies, as well as rolls and breakfast pastries. But coffeecakes, cupcakes, cheesecakes, focaccia and cookies for catering are made from scratch. “The cheesecakes are my signature,” she says. “I can make them sugar-free as well as gluten-free with nut crusts. Red velvet and pumpkin are favorites.”

The bakery program, which has expanded significantly in four years, is a draw for students, who boast about their small college having its own pastry chef, Hartzell says. 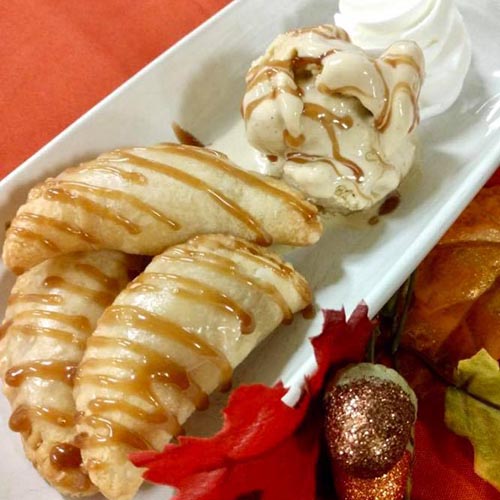 “Pierogies are a whole food group in itself here in Pennsylvania,” Vann says. “You can fill them with anything.” Heiser created mini fried apple pies that resemble those favorites, which she labels “pierogies.” They’re available in the grab-and-go section of the bakery and on the restaurant’s dessert menu, accompanied by caramel sauce and cinnamon ice cream. Gobs are what people living in western Pennsylvania call whoopie pies—round cake sandwiches with a creamy filling. Eight flavor variations are on offer at Laurel View.

Pierogies are a whole food group in itself here in Pennsylvania. — Kelsey Vann

Since management company Cura took over the community’s foodservice three years ago, the baking program has grown substantially, Vann says. “At first, we only served the 300 residents, but now we’re doing cakes for weddings and other celebrations that the public can purchase. We’re even selling baked goods to the supermarket and local restaurants.”

Desserts are a big draw at LinkedIn’s offices in San Francisco, according to Mitch Blanco, pastry chef for the company’s Artisan Restaurant Collection, managed by Sodexo. The pastry department provides desserts for breakfast, lunch and catering, and everything is made from scratch, with produce sourced locally when possible. Blanco makes sure the items cover the full spectrum of dietary concerns, including vegan, gluten-free, low-fat, low-sugar and keto.