Garlic, which dates back to 4,000 B.C., has a long and colorful history. Egyptian slaves are said to have eaten garlic bulbs to increase stamina and prevent disease during construction of the Great Pyramids. Greeks and Romans also used garlic for medicinal purposes. It is believed to ward off heart disease, cancer, colds and flu—as well as vampires and other evil spirits. 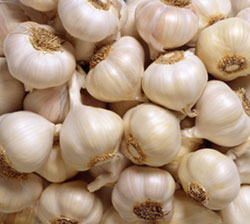 This much is true today: Garlic is one of the most commonly used items by chefs. According to the Ag Marketing Resource Center, in 2010 the average person consumed 2.3 pounds of garlic.

This month, FSD talked with operators to find out how they use this ubiquitous ingredient, which is considered both a vegetable and an herb. Unfortunately, we can neither confirm nor deny garlic’s warding powers against vampires. Some things, it seems, are destined to remain a mystery.

“I would say the majority of people are drawn to garlic,” Landa explains. “When people come through the kitchen when I’m roasting garlic, they ask, ‘What smells great?’”

The seminary is “an epicenter for the well educated,” Landa says. Many of the school’s students and staff are vegetarian, and Landa says he receives a lot of requests for healthful dishes.

Landa roasts garlic, which mellows the bulbs’ sharp flavor, before adding it to vegetarian and healthful dishes such as roasted garlic mashed potatoes with rosemary or a Tuscan white bean soup. Roasted garlic purée can also be used as a spread for bread and can replace butter on toast. “Roasted garlic is a delicious, cholesterol-free substitute for butter,” Landa says. “Roasted garlic squeezes out like toothpaste. I always have roasted garlic bulbs on hand.”

To prepare the roasted garlic, Landa slices the tops off whole heads to expose a bit of each clove. He then drizzles them with olive oil and seasons the cloves with rosemary and salt. Lastly Landa wraps the bulbs in foil and roasts them until the cloves caramelize and turn mushy. Roasted garlic cloves can be kept in their natural skins for at least a week, Landa says.

To season about five pounds of Yukon Gold potatoes for his garlic mashed potatoes, Landa whips in the paste from two bulbs of garlic. He then adds chopped rosemary and serves with full-flavored entrées, such as roast chicken or grilled skirt steak.
Landa flavors two gallons of a Tuscan white bean soup with the purée from about three bulbs of roasted garlic. In addition to seasoning, the cooked garlic also slightly thickens his mixture of chicken and beef stock for the soup’s broth. Landa’s Tuscan soup also features large great Northern white beans and herbs often found in Tuscany, such as marjoram, rosemary and thyme.

In Cambridge, Mass., at Harvard University Dining, Chef/Production Manager Daniel Clarke uses a lot of fresh garlic in his recipes. One garlic application Clarke uses is cutting raw garlic in half and rubbing it on crostini as it emerges from the oven.
Clarke also offers garlic-spiked Rioja-style potatoes with chorizo and pimento that is cooked until the mixture turns into a stewlike consistency. For a more delicate flavor, Clarke roasts garlic or cooks it like a confit, covered with oil, before puréeing it for an aïoli-style mixture that is typically added to pasta dishes.

Clarke also denotes which items include garlic on dish descriptions, for dietary and allergy reasons. But that doesn’t discourage most diners. “The students view garlic as healthy,” he says. “I don’t think it is a turnoff for them.”

Local produce: In the employee cafeteria at Cooper University Hospital in Camden, N.J., which does about 1,200 transactions during a typical lunch period, garlic is often incorporated in the flavoring of many vegetable dishes created using locally grown produce. According to Fran Cassidy, director of food and nutrition, asparagus with garlic and olive oil is one popular combination. This spring Cassidy added local snow peas with sesame oil and garlic to the menu. For a summer dish the hospital’s culinary team combined green beans and wax beans sautéed with garlic, which was offered on the salad bar.

Cassidy says that since offering these local produce options, purchases from the salad bar have increased. Those purchases now account for 21% of all transactions, up from 7% before the local options were added.

However, garlic doesn’t play so central a role on the patient menu, she adds. “For patients, you have to think of the aroma of garlic,” Cassidy explains. “If someone is nauseous, it may not be the aroma that person wants.” Nevertheless, Cassidy still adds a hint of garlic to flavor some patients’ dishes.

“We add a little garlic to our mashed potatoes, not so that you would know it is there unless you really don’t like garlic or are very sensitive,” Cassidy says. “We use just enough garlic power to add flavor, but not so much that patients say, ‘Oh, that tastes like garlic.’”

A light touch: In the 21,000-student Osseo Area School District, northwest of Minneapolis, Tom Pellegrino, director of foodservice, says some garlic-seasoned dishes are among his students’ favorites. For example, his team lightly seasons tomato sauce with garlic powder and judiciously sprinkles garlic powder on a cheese bread that’s popular with the students. For the bread, called “Italian dunkers,” he sprays the exterior with olive oil before topping it with a touch of garlic powder. Pellegrino selects the powder form more for ease of use and to save time, rather than its mild flavor.

“Garlic is fantastic,” Pellegrino says, adding that he doesn’t use a lot of it in the cafeterias because he finds many young kids can be sensitive to its strong flavors.