Continue to Site >>>
Edit
With the proliferation of Asian products, creating authentic Asian flavors is easier than ever. 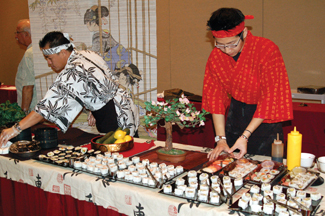 Asian cuisine has continued to gain in popularity this year, according to FSD’s 2009 Menu Development Survey. Once viewed as exotic, Asian fare has gone mainstream. Ingredients once found only in ethnic markets in major urban centers are now readily available from a growing number of sources. At the same time, operators say customers of all ages are demanding the real deal to satisfy their sophisticated palates.

One example is Orange County Public Schools in Orlando, Fla., which serves 175,000 meals a day. The foodservice department conducted focus groups that show K-12 children are “looking for authentic food,” says Kern Halls, area manager. “We serve sushi from a local vendor, which bring in their chefs and ingredients. Guess who buys the most—elementary, middle or high school students? Surprisingly, it’s the elementary schoolers.”

“The elementary kids like the tangerine chicken, but the older ones like the spicier dishes,” Hall says. “Our kids are very diverse and they go out to eat at Asian restaurants with their parents.” 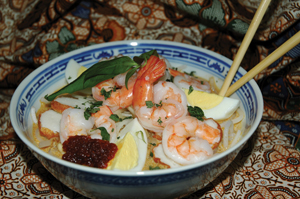 his clientele is looking for more authentic flavors. He puts an Asian twist on ahi tuna by searing and serving it rare with wasabi honey mustard, garlic chili paste, soy sauce, sesame oil and scallions. “It’s like sushi on a bun,” Beres says. Beres also prepares Japanese kabocha squash ravioli at the pasta station with duck confit and star anise. He predicts the next up and coming Asian cuisine could be Malaysian because of its subtlety and freshness.

“We also have an international station five days a week where we feature three salads, main dishes and sides from a given country, and our exhibition cooking station always has a theme too,” Smith says. “One of our most popular items is a noodle bowl, which is very filling and satisfying. We’ll offer several different noodles such as vermicelli, soba, udon and lo mein with broth and a choice of proteins and vegetables. There’s a condiment station with fresh cilantro, toasted sesame seeds, soy sauce, Thai lemongrass, sesame oil, chili oil and scallions. The customers pick their noodle type, broth, protein and vegetables, which might be snow peas, bamboo shoots or shiitake mushrooms.” 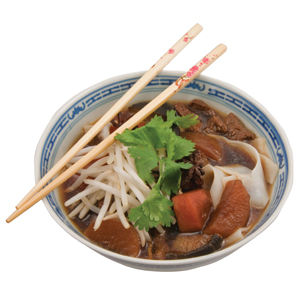 The café also hosts a chef’s table once or twice a week that offers specially prepared dishes made in front of the customers, and Asian-inspired dishes are always well received, according to Smith. “We do a vegetarian steamed bun made from rice flour with a stir-fry of vegetables and crispy tofu with an Asian-style barbecue sauce, served three little buns to a portion,” Smith says. “ We like to take ordinary dishes and give them an Asian twist. We do a lot of things using tofu—you can barbecue or grill it like steak and serve with a mushroom sauce.”

At the University of Massachusetts in Amherst, Ken Toong, executive director of Dining Services, has long been at the forefront of promoting Asian cuisine. “We’ve paid lots of attention to Asian food because it’s healthy,” Toong says. Five years ago, Toong launched an all-you-can-eat sushi bar five days a week, with chefs making individual rolls to order. Although it’s labor intensive, Toong solved the labor problem by training student foodservice workers to be sushi chefs. Noodle bowls are also a perennial student favorite, available in three variations—Japanese, Vietnamese and Cantonese. There is also a very popular stir-fry station, which allows students to pick ingredients and have them cooked in a wok to their individual taste. At an express entrée station, students cook their own stir-fries on six induction cookers—a chef is available to help.

A decade ago, Toong says, authentic ingredients were more difficult to find, but today many types of soy-based sauces, rice cakes and fish sauce are readily available. Several years ago the university added Thai food to the mix along with dim sum. The next big thing, Toong predicts, is Korean. “We have so much potential to grow this part of our business.”

Sushi plays a big role at Humana, Inc. in Louisville, Ky., says Patty Guist, director of associate programs and services. Every week the café hosts Sushi Thursday, which is one of the foodservice program’s most popular promotions. Personnel from a local restaurant come in with the ingredients and prepare the rolls, while a chef on staff makes the sushi.

“We do a lot of food with an Asian twist,” Guist says. “We make our own veggie burgers and add Asian sauces and glazes.”

A Cambodian-born chef, Tha Poeuk, at Williams College in Williamstown, Mass. makes Thai Penang dishes and Asian-style crepês. “We use tofu in the crepes with lemongrass and Thai basil and people love it,” he says. “Today we made 400 Asian crêpes.” The college serves about 2,000 people in five dining centers. He’s also serving Korean dishes and Japanese-style sushi.

“I believe the interest in Asian food is due to the availability of the food and the realization that it’s healthful ingredients that have great flavor,” Zimnoch says. “Many of these dishes are no longer just in metropolitan areas anymore. They’re becoming more mainstream in rural areas. Asian food is becoming as recognizable to the generation currently enrolling in college as say, meatloaf.”

Dishes from Korea, Japan and Vietnam are made with ingredients from a single purveyor who supplies everything. “Our students really like miso soups, Asian salads and Vietnamese beef meatballs,” Zimnoch says. “We just can’t keep up with the demand for some Korean dishes like short ribs. We’ll also do fried tofu squares that are tossed in Buffalo wing sauce.”

On the West Coast at the University of California at Santa Cruz, Executive Chef Dwight Collins sees the availability of Asian products growing continually. “Ten years ago there weren’t many commercial Asian sauces, so we made our own—Kung Pao and General Tso’s—from scratch. We used to commissary our sauces by making 30 gallons at a time and sending them out to the dining halls.”

Also new are prepared breaded pork bites and Karaage chicken that can be deep-fried quickly and served with pineapple, onions and peppers. “They’re fast and easy and we use them in our exhibition station and add sauces,” says Collins. UCSC uses a commercial base for its Pho program, developed by a Vietnamese chef. At the miso soup bar, a self-serve machine allows students to push a button to mix the soup concentrate and dispense it into a cup. Also popular are Korean bulgogi and Thai curries, and next quarter, Collins plans to add an Indian curry bar.

A runner-up in the 2009 USA Rice Council’s healthy rice bowls contest, Rachel Kovich, foodservice director for the University of Chicago Laboratory Schools, does Mongolian beef and sweet and sour pork rice bowls. “It’s a healthy way for kids to enjoy classic Asian cuisine,” she says. “We are able to provide a nutrient-packed meal in a fun way. The students all love them. They enjoy being able to put together their own bowl with their choice of brown or white rice and protein. We cycle the rice bowls every other week and do a side of steamed pot stickers with edamame and low-sodium soy sauce.”

At Hendrix College in Conway, Ark., Dawn Hearne, assistant director of dining, offers the standard egg rolls, sweet and sour pork plus several Asian entrées on the vegan/vegetarian menu such as stir fry vegetables and rice or tofu and broccoli in garlic sauce.

“What the students really like is the wok area,” Hearne says. “These kids grew up eating out a lot, so they’re not shy about experiencing new flavors, and are much more adventurous in their food selections.”