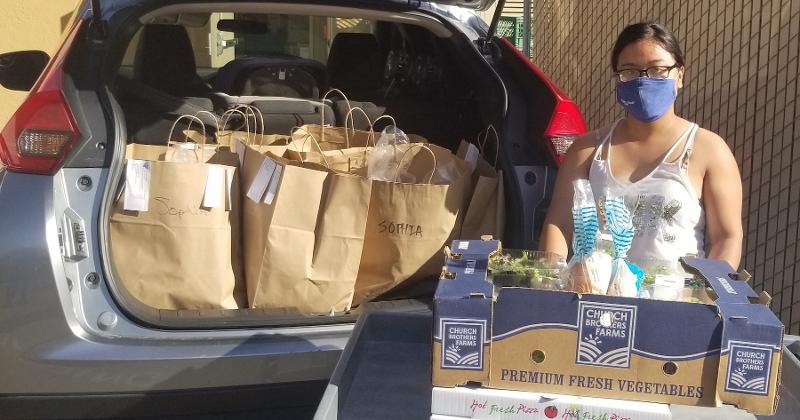 Like so many schools, Shasta College in Redding, Calif., shifted classes online soon after the pandemic hit.

Early on, things seemed to be going well at the rural community college about two hours from the Oregon border. Shasta allowed the foodservice program to move to a work-from-home model, and the team got creative in assigning trainings, recipe challenges and more to help staffers log hours.

That worked fine through May, when most staffers typically come off contract for a while. But with summer programs canceled and the situation looking shaky for the fall, Shasta’s foodservice team was in trouble.

“I had a meeting with my bosses where I was told we were looking at layoffs,” says Denise Axtell, director of food services. “So, OK, the writing’s on the wall. Where do we go from here? How do we figure out how to keep ourselves around?”

For Axtell, the answer was clear: It was time to get entrepreneurial.

Axtell’s family has long been in the restaurant business, dating back to her grandfather. She came from the restaurant world herself, and family members, including cousins, are still in the industry. “It’s very well ingrained in my genetics to be an entrepreneur,” she says. “So my go-to is, ‘What would the family business do’ versus ‘What would the institution do.’”

Inspiration from the outside

So the team forged ahead, launching new initiatives in online ordering, grocery boxes and meal kits. The moves not only avoided layoffs but also reinvigorated staffers with what Axtell calls “a new sense of purpose.”

The first step was obvious: implementing contactless ordering and pickup. It was a logistically complex project that just didn’t seem possible pre-pandemic, but now felt like a requirement.

At first, the learning curve was steep. “Our students are pretty savvy with tech, but some our staff were not so confident and felt it was intimidating,” says Nick Koenig, manager of the college’s food services and Starbucks location.

Over time, they all learned the system, aided in part by a step-by-step manual with screenshots that Koenig put together. Ultimately, it “empowered them in this time of uncertainty,” Koenig says. “It’s like, we’ve done so much, what else are we capable of in the future when we’re back to normal?”

But in the meantime, there was more to be done. With far fewer meals being served daily, the foodservice department needed other ways to drive revenue.

"What else are we capable of in the future when we’re back to normal?" -Nick Koenig

Axtell had visited a family member’s restaurant in the Bay Area and noticed a flyer advertising grocery box delivery. She immediately thought about how her team wouldn’t be able to serve TRIO Upward Bound, a federally funded program designed to prepare low-income high school students for post-secondary education, which would be on campus that summer as usual.

“I reached out to my Upward Bound contacts and said, maybe we can sell some groceries to your students, stuff that they can take home to their families,” Axtell says. “As we talked about what that could look like, we just got more and more excited.”

What began as a 6-week program of weekly produce deliveries to about 20 Upward Bound families became an ongoing offering available to students and staff last August. The team developed six box options, including two that are 100% organic, ranging from $20 to $40 per box.

They purchased groceries at Costco, laid out the boxes and supplied photos to the marketing department to create fliers. And the demand since has been incredible.

“Our goal is usually to keep food costs under 30%,” Axtell says. “You can’t turn groceries for that, so we decided 70-75% would be OK. We’re trying to make it up on volume, and certainly some profit is better than nothing.”

Shasta’s third new initiative is also one swiped from the commercial realm: meal kits. And they’ve been by far the biggest hit, Axtell and Koenig say.

Typically sold for $15 to $20, the meal kits come with all of the ingredients needed to feed a family of four as well as a recipe, a safety sheet and access to how-to videos filmed by Shasta’s dining team. The No. 1 seller is a take-and-bake pizza with a Caesar salad; other offerings include loaded baked potatoes, chicken fajitas, pulled pork and a “Shasta bowl” with grains and toppings.

The team also put together special holiday meals to serve larger parties, such as a turkey Thanksgiving dinner and a Christmas pork loin with side dishes and a dessert tray. Fun additions have also made the “regular” meal kits more special: “Little things like a ‘Movie Night’ add-on with a 2-liter soda, popcorn and frozen cookie dough have been a huge, huge hit,” Koenig says. 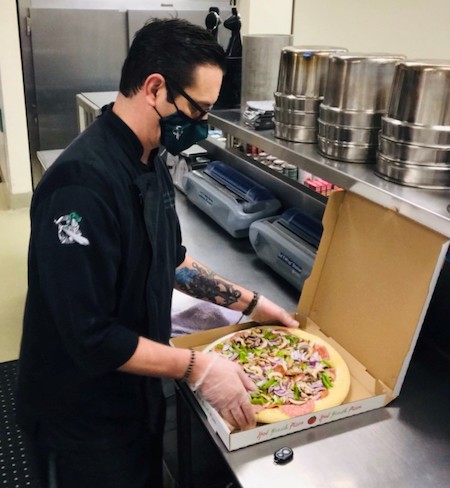 Between the grocery boxes and meal kits, Shasta sold close to 1,100 units during the fall semester. For a college that served nearly that number of meals in a single day pre-pandemic, that may seem small. But Axtell says the figure isn’t the point.

“While that number isn’t huge, the impact on the students we served was enormous,” she says. “We’ve had numbers of students writing thank-you notes, and one day, a woman left a voicemail saying, ‘I can’t believe I can feed my family this wonderful food.’”

Shasta plans to continue all three programs post-pandemic, as they fill a need for convenience and comfort that will remain even after the COVID crisis fades. And the initiatives’ success means the staff has stayed intact over a year that initially looked very bleak.

“It shows that you always have to have your eyes open to the future and learn from lessons in the past,” Axtell says. “We’ve used this time to learn a lot and to try a lot. And because of that, we’re still here.”

Nominate an FSO of the Month
CU  coronavirus