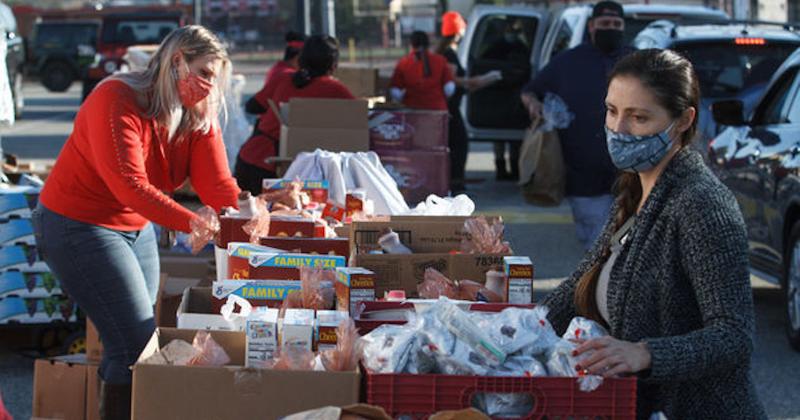 Like just about every foodservice operator in March 2020, the nutrition team at Fallbrook Union High School District knew their corner of California had changed in an instant when coronavirus hit.

But they rose to the challenge: Employees gamely chugged coffee and set about switching from cafeteria service to curbside pickup and bus route delivery.

Reynolds texted her boss an S.O.S. This is too much, she wrote. We just cannot do it this way. Within an hour, Reynolds was opening an email from the superintendent promising that help was on the way.

And they showed up for Reynolds, literally. Her boss and superintendent arrived to help, and they weren’t the only ones. Teachers, maintenance staff, IT, clerks, grounds crew and many more donned hairnets, cycling in and out over the weeks to help make sure every Fallbrook student received a meal.

“To have somebody in a leadership position, who’s dealing with so much [at the outset of the pandemic], jump in and say ‘what you do is important’… well, it means everything,” Reynolds says. “Plus, [it] was a real silver lining for our staff to get to work side by side with people they’d normally just wave to at school. I think 99% of the people who came to help really enjoyed it.”

With everyone chipping in, the Fallbrook team at large was able to keep the district’s students fed as the pandemic wore on through the rest of the school year and the summer. Students and parents alike frequently commented that meal pickup had become an exciting outing amid endless days that all looked the same. But some parents did offer a gentle critique—and it was something Fallbrook’s foodservice lead, Toni Yokum, had noticed herself.

“We were preparing all of these little bags of chopped up vegetables or fruits, and they were getting lost at the back of people’s fridges, including mine,” Yokum says.

Reynolds and Yokum can’t exactly recall who first said it—each credits the other—but someone had an idea that would eventually lead to a major service revamp.

They both agree on one thing: It started with a cucumber.

“We were slicing up and bagging a cucumber, and Judi was like, ‘Why can’t we just give them the whole thing?’” Yokum says. “I said, ‘Well, doggone it, why can’t we? Let’s just add up the servings it counts for.’”

Next, they added a whole squash, then a full onion. A quart of juice or half-gallon of milk.

Sometimes, Reynolds threw in a few recipe ideas. But the team didn’t think of their little experiment as a true bulk service “program” until October, when an ordering error turned out to be fortuitous.

“I ordered the wrong tamales,” Yokum says, laughing. “I thought they’d be individually wrapped, and instead they arrived in four-packs. We were thinking, geez, now we’ll have to cut them open and repackage everything—or wait, do we?”

Let’s try it, the team decided. Reynolds took photos of the four-packs and advertised them on the district’s Facebook page. People were buzzing about the tamales right away, and once served, they proved to be a huge hit. 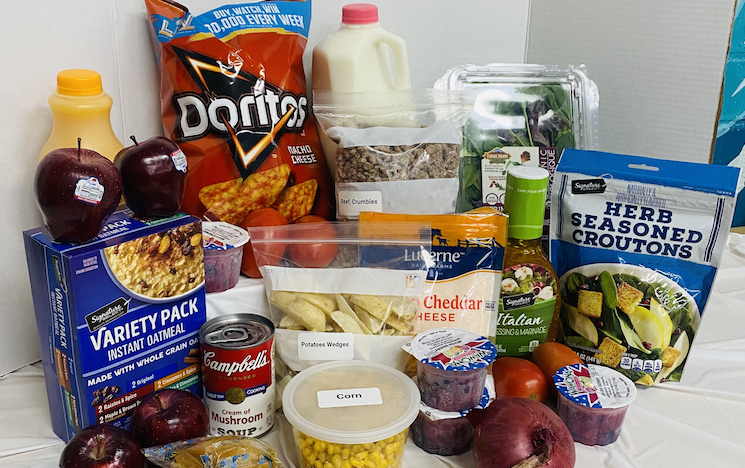 “People were just raving about them, saying how all of this was so much better than little packets of things,” Reynolds says. “Then everyone started throwing out ideas: ‘What if we tried four servings of buffalo chicken in a serve? Could we do chili?’”

From October to January, Reynolds says, the bulk program began to take shape week by week. They focused on Thursdays as each week’s “big serve” of four days’ worth of meals. The team took stock of what was in the freezer and what was set to come in from the USDA, and they built monthlong menus based on inventory. And when they couldn’t find what they needed from suppliers, they hit the supermarket.

Families have loved the entrees, and upcoming plans for spring break and other holidays include a 5-pound bag of chicken wings and sides, whole pizzas and 1.5-pound hams—but the original inspiration, whole vegetables, is a special highlight.

“My passion is introducing people to new foods, and while some of these items are staples for our families, some are items they’ve never tried,” Reynolds says. “A few people asked about what the beets were or said they didn’t know a whole jicama looked like that. And they’ll come back and say their whole family loved trying the roasted beet slices recipe we sent home.”

It’s introduced a “sense of wonder” that has been a bright spot during the pandemic, Reynolds says. And bulk service has been beneficial for the staff, too, thanks to much less time chopping up little packets of produce. It takes them about as much time to prepare 2,000 bulk meal kits as it did to prepare about 750 to 1,000 individual meals.

Yokum won’t soon forget that the inspiration came from looking right at home.

“It just makes sense that if I didn’t want little packets of carrots in the back of my fridge, other people wouldn’t either,” she says. “It can often be as simple as: What would I want on my table tonight?”

Nominate an FSO of the Month
coronavirus