While creating a cafe menu for the Generations of Care Tower at ProMedica Toledo Hospital in Toledo, Ohio, Senior Executive Chef Hannah Robertson could often be found walking through the new eatery to see just how many steps it took to get from one area to the next.

While Robertson admits it sounds silly, reenacting the steps became an important part of designing the menu because it allowed her to get a feel for how quickly staff could create certain dishes and organize each station for maximum productivity.

“I didn’t exactly know what I wanted where, and so I spent a lot of time down there just walking about the new space and just thinking about it,” she says. “Like sitting there, looking at stations, opening up cupboards, opening up coolers and planning it out.”

While the patient menu stayed the same, the hospital’s new cafe gave the foodservice team the opportunity to experiment with fresh dishes. The space, which opened this summer, is home to several new concepts, including a panini spot and a pizza station where guests can build their own pies. Diners looking for a lighter option can enjoy a full salad bar with an array of toppings such as freshly grilled salmon and chicken. 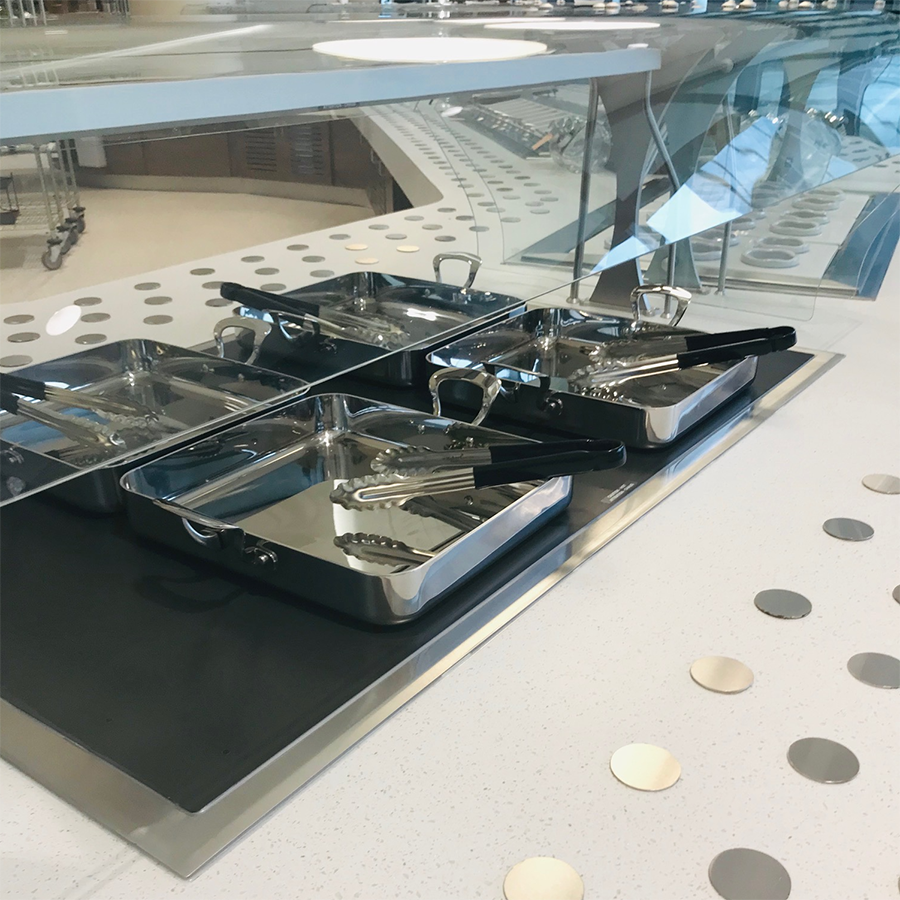 The menu for the space was largely influenced by its updated equipment, Robertson says, noting that the new grill is half the size of the old one and also includes a flat-top section. As a result, the team ditched less popular menu items and shifted others around. Quesadillas, for example, transitioned from the grill to the new panini station, where guests get the option to top them with items such as guacamole, pico de gallo and shredded cheese.

The new My Dish action station, which features a rotating concept, is one of Robertson’s favorites. Each week, guests can try a different customizable dish such as risotto or poke.

“We do have a multinational population here,” Robertson says. “So I wanted to sort of appeal to that population as well, and to kind of introduce some other flavors. I didn't want it to be normal hospital food.”

Although the cafe brought a large number of new offerings, Robertson and her team made sure to keep food quality and speed a priority. “I didn’t want to be opening up with all the bells and whistles and not be able to sustain it,” she says. “There's no point making a lavish menu if the menu isn't going to be executed on time.”

Initially, Robertson planned to have a more expansive menu available on opening day. However, after seeing staff struggle a bit during their first training session, she decided to pare back the offerings, landing on a menu that would still excite guests, but not overwhelm employees.

The pizza oven, for example, was a challenge for workers, who had to figure out how to move the dough in the oven and learn the oven’s hot spots to ensure pies came out at the perfect temperature. “Cooking in one of those ovens is no easy feat,” Robertson says. “It’s a lot of work.”

To help staff keep up with customer demand in the first few months, Robertson and her team intentionally left off some menu items that will be added at a later date. A side benefit, she says, is this will also keep guests interested as time goes on.

Offerings up the team’s sleeves include calzones, stromboli and entrees such as lasagna. “I think it's important that when you open, you open successfully, and that you're in a position where you can keep that up,” Robertson says. “And as soon as you maintain that, that means you can begin adding the different things.”