As The University of Chicago Medical Center prepared for the revamp of one of its kitchens to feed an additional 202 patients, it wasn’t just foodservice executives coming to the table to make decisions. The process, which began in fall 2014, involved hourly employees from the ground up, says Daryl Wilkerson, vice president of support services. “They actually helped build this [kitchen], which is why I think this is so spectacular,” he says. “Normally what you’ll get in a lot of projects is senior people sitting around in shirts and ties making decisions.” 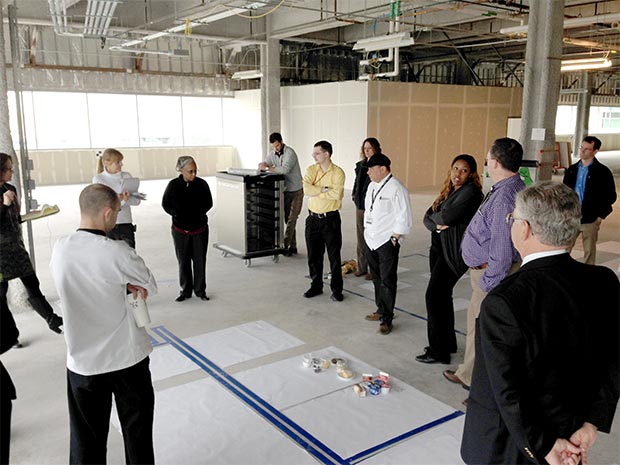 The hospital follows the principles of lean management, which looks to reduce wasteful processes or practices—something those hourly employees can speak to best because of their on-the-ground experience, says MaryPat Severns, Aramark resident director of food services at University of Chicago. For example, “When we were making decisions on how to set up the store room, we had key employees in there because they know what’s most used, and that those items need to be placed near the entrance,” she says.

Moving into a temporary complex for part of the process rather than undergoing multiphase construction also gave the operations team a chance to rethink their tray line, and it informed the design for the final kitchen, says Elizabeth Lockwood, project manager. “It’s kind of like when you’re downsizing your house—you have to clean out all the closets,” she says.

Active communication was key in getting hourly workers acclimated with—and even excited about—the idea of change at the Center for Care and Discovery kitchen, Severns says. Another UCMC kitchen renovation running about three to six months ahead of the CCD kitchen was also using temporary facilities to help speed the process, giving the team a peek into the future. “That helped a lot, because when you say, ‘You’re going to operate out of a trailer,’ they go, ‘Oh, my God,’” Severns says. “But being able to talk to staff [who have been through the same experience], people say, ‘Oh, this is going to be OK.’”